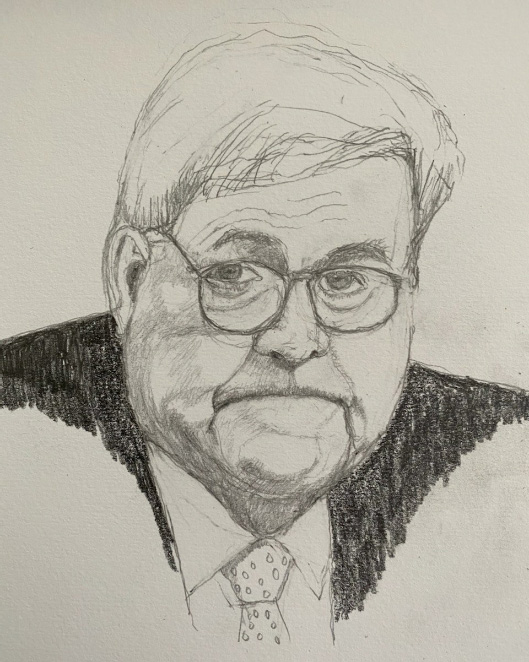 William Pelham Barr came out of retirement in 2019 to serve as attorney general for Donald Trump. He had previously served in the same position under George HW Bush (1991-1993) where he was known for his tough stance on criminal justice policies (he wrote a report called The Case for More Incarceration). He is also known as a proponent of the unitary executive theory, awarding the president with almost unrestricted authority over the executive branch. In this case that seems to mean that Barr has acted almost as a personal lawyer for Trump rather than as unbiased head of the justice department. We saw that, for instance, in the way Barr mangled the Mueller report so it was less damaging to the president. And in the way he’s thrown his weight around regarding convictions of Trump allies Roger Stone and Michael Flynn. To me, drawing Barr’s face, I see a burdened figure — a man with dark dreams of gaining more and more power in the running of our country. He slithers out of retirement and latches on to the most uneducated and explosive president we’ve had in a long time, and the question is why? I leave you to ponder that.
Copyright © 2018 Artprofiler
X