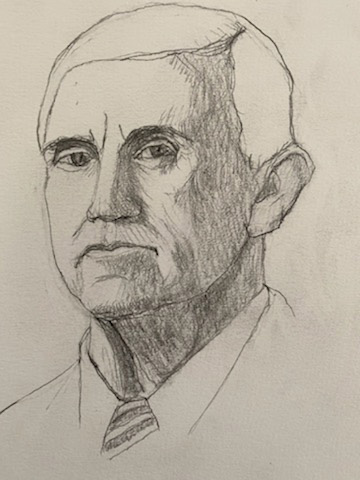 Vice President Mike Pence is an earnest fellow, gamely crisscrossing the United States, campaigning on behalf of his boss, Donald Trump, and possibly risking his own life. Is that a wise move? Several close aides and advisors have recently been diagnosed with Covid, and yet Pence — now exposed — still travels, openly ignoring protocols imposed on the rest of the nation to quarantine if you’ve been around someone who’s tested positive. So what’s the deal with Pence? This is a man who calls his wife “Mother,” who won’t eat a meal alone with a woman who isn’t his wife, who believes homosexuality is sinful, and who, as far as we know, subscribes (or has subscribed) to conversion therapy. His is the rightwing vision of the world held by Amy Coney Barrett: limit government, slash social safety programs, get rid of Roe, weaken voting and civil rights. All of which darkly remind me of the restraints placed on society in "A Handmaid’s Tale." On top of that, Pence is almost as accomplished a liar as Trump, telling us in sleek, unctuous tones that we have rounded the corner with Covid, that the disease was handled well and will soon be gone. Ha! Tell that to all the people who’ve lost parents, grandparents, husbands, sisters, brothers, wives, children. This man calls himself religious. Wow! Wonder what will happen if and when he approaches those pearly gates and has to look god in the eye.
Copyright © 2018 Artprofiler
X