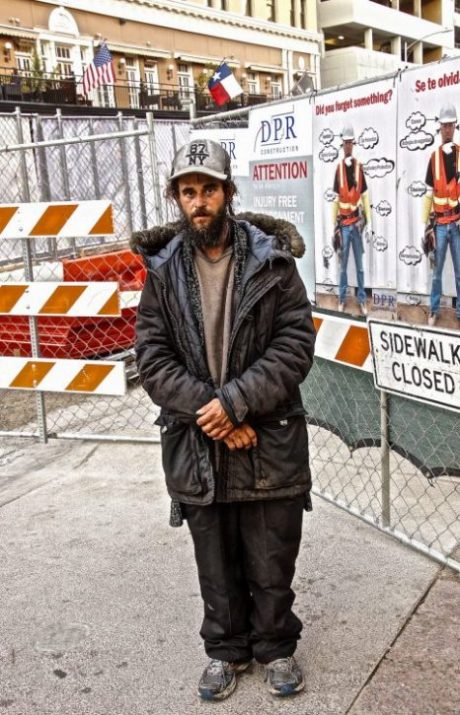 In the winter of 2016, I began documenting the homeless community in downtown Austin. One of the first portraits I took was of a man named David Watkins, whom I met at Congress Avenue and Seventh Street, where the Aloft/Element Hotel was being built. It was a mild winter day on February 19, but David was wearing a heavy coat with a fur-lined hood. I sensed his vulnerability, and I think he felt mine. David said he was from a small town in Central Texas and that he was living on the streets. He agreed to let me take his photo, and with virtually no prompting, he struck a somber and regal pose in front of the hotel construction site.

Looking back, I realize I was seeking connections. My life was in transition, with much discomfort and pain, and I was desperate for conversations with no filters. Just raw truth, like the kind I saw that day in David’s dark brown eyes. I started exploring the city’s downtown streets in earnest, meeting individuals from all walks of life. Hoofing it on foot, I experimented with trust — asking people to let me get close enough with my camera to capture the stories etched in the grime and in the lines on their faces.
Copyright © 2018 Artprofiler
X