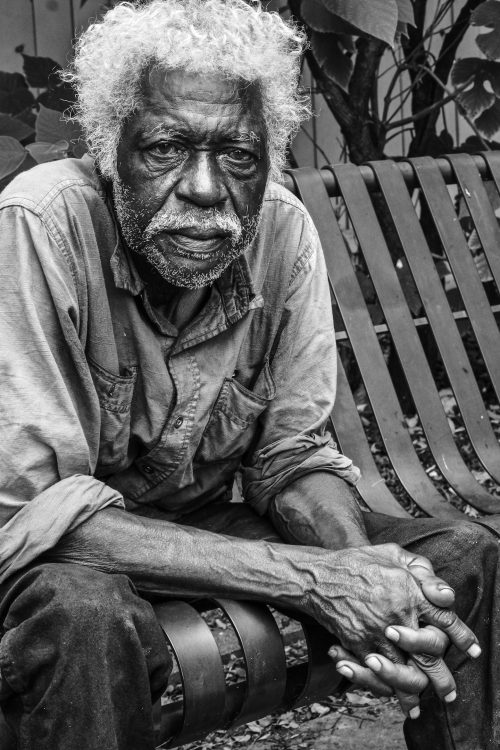 On August 4, 2018, I met Thomas Debolds, a 69-year-old military veteran who was living near downtown Austin on East 11th Street. Thomas, who served almost four years with the U.S. Navy during the Vietnam War, grew up near the Central Texas towns of Smithville and La Grange, where he fed chickens and cows on his stepfather’s farm. “I’m a country boy,” he said, agreeing to let me take his photo in exchange for getting him some fresh tomatoes from a nearby store.

I love taking people’s portraits and trying to capture the narratives in their eyes. I was equally drawn to Thomas’s strong hands, the dirt beneath his fingernails, the veins in his arms, and his rolled-up sleeves and weathered shirt collar, all of which held their own stories.

Once, when I stopped back by to check on Thomas, he was sound asleep on the bench where I had first discovered him. I didn’t want to wake him. I got back in my car, drove to a store to purchase a gallon of water, and then returned to his makeshift campsite, leaving the water on the ground under the bench.
Copyright © 2018 Artprofiler
X