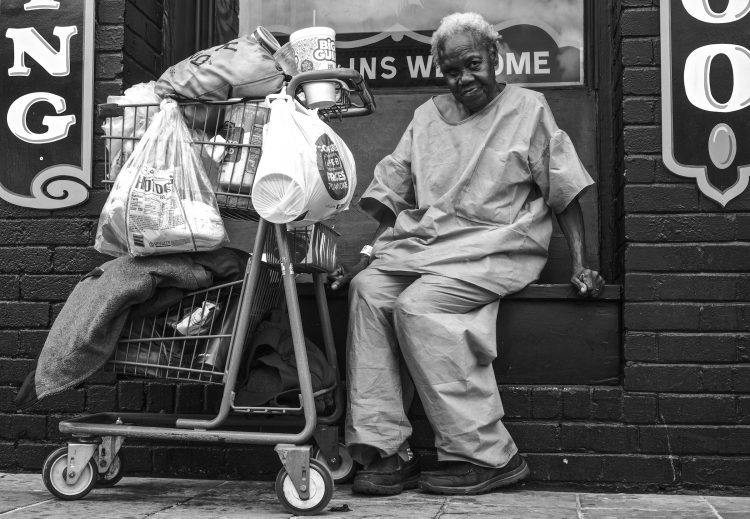 Of all the images I’ve captured of Shirley Erskin, this photo from May 5, 2019, especially lingers in my mind. On this day, still wearing her patient clothing and ID wristband from a recent hospital stay, Shirley confidently held court on Sixth Street as she interacted with passersby.

This image is classic Shirley: a beloved member of the downtown Austin homeless community who underwent open-heart surgery a few years ago, suffers from high blood pressure, and has insisted — until the 2020 coronavirus pandemic — on living on the streets, where she’s a highly visible figure pushing a grocery basket filled with her belongings.

Shirley and her longtime companion, Michael “Cowboy” Alexander, were living at the corner of Seventh and Red River streets in early 2020. They became separated from each other during the onset of the virus outbreak, with each going on to face major challenges.

Because of her poor health conditions, Shirley was temporarily housed in nursing homes and twice was hospitalized, including after suffering a heart attack. Cowboy, who sustained a broken jaw when he was attacked from behind on the streets, left downtown and wound up living near Manor, east of Austin.

With the assistance of social workers, and a lot of luck, Shirley and Cowboy were reunited and are now living in one of the protective lodges — repurposed hotels — that were established by the City of Austin as interim medical sites for those considered high risk during COVID-19.
Copyright © 2018 Artprofiler
X