Paramount Summer Classic Film Series: An American in Paris and Singin’ in the Rain

The Paramount Summer Classic Film Series for 2019 has offered two movie gems back-to-back, both from Metro-Goldwyn-Mayer. They are An American in Paris (1951) and Singin’ in the Rain (1952), together considered the high plateau of dancer Gene Kelly’s artistic career in movies and dance. The movies are both dance musicals, the kind of big-budget movies that are no longer produced. An American in Paris was originally a stage production of songs by George and Ira Gershwin. MGM’s film version won six Academy Awards, including Best Picture. Kelly had creative carte blanche in American and Singin’, serving as male lead and choreographer in both, and co-director with Stanley Donen in Singin’. Kelly launched the career of ingénue Leslie Caron in An American in Paris, bringing the 19-year-old prima ballerina from Paris to the US for the film. The Academy gave Kelly an honorary Academy Award for his contribution to film musicals and the art of choreography. Kelly leveraged that success with Singin’ in the Rain in 1952. Although not as popular as An American in Paris initially, the film and the title solo have come to embody the best of musical films, MGM’s and others. Kelly’s co-stars in Singin’ were Donald O’Connor, Debbie Reynolds and Cyd Charisse. 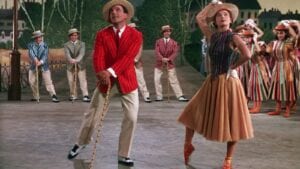 Choreographically, Kelly is credited with making the ballet form palatable and interesting to film audiences. He experimented with cinematic techniques such as lighting, split screens, camera techniques, and special effects–all to integrate dance with film. Kelly studied many dance forms such as folk, tap, jazz, and modern dance, and he said his style was a hybrid of these forms. His first love, however, was ballet, in which he seemed to find his liberation. He studied ballet in the early 1930s in New York under Russian ballet masters. 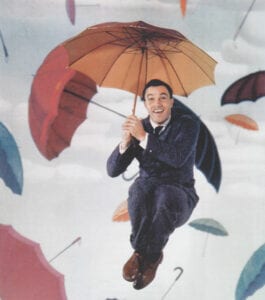 Kelly admired and worked with Fred Astaire. Both choreographers showed great concern with putting dance on film and how it was shown. Astaire’s principal accomplishment, beyond exquisite performances, was his insistence on full-body imagery in production numbers. Prior to that, cameramen and cinematographers moved in for close-ups inevitably, leaving complex dance steps and moving feet out of frame. Kelly took advantage of the cinematic form by moving the camera with the dance, incorporating it into the spatial patterns of the dance. This gave the audience member, the observer, an active, mobile perspective, something they could not have enjoyed sitting statically in a chair at a stage show. Kelly’s and Astaire’s common legacy lives today in the emerging trend of fine-arts dance on film, as in the successful Dance on Film series, a component of the Austin Dance Festival.

An American in Paris 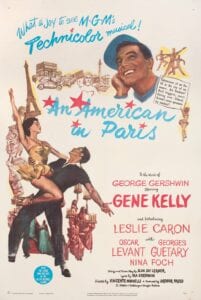 The prizewinner was released in 1951. The premise is that an American WWII veteran stayed in Paris after the war to study art and become a painter. Romance ensued, and that’s all the plot inspiration needed by the Gershwins, Director Vincent Minelli, Choreographer Gene Kelly, and MGM studios. Alan Jay Lerner wrote the screenplay. Kelly’s innovations are tap-danced onto the film, as in his street dance performed for the Paris street urchins, charming beyond belief. In that scene, the camera moved with him heel-and-toeing half a block down the street and then back again. 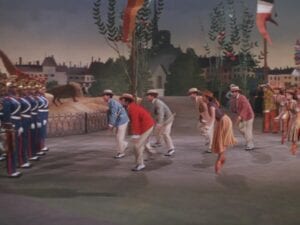 The peak of the movie, however, is the unforgettable final sequence, a 17 minute production number that took half a million dollars to produce. The dancing took place over several sets with sketch backgrounds of Paris parks and monuments and prop-heavy flower markets and fountains that released dry ice vapor as their flow. It was all to a medley of Gershwin numbers, and played as a fantasy memorial to the American vet’s romantic despair and a deep loving homage to the city of Paris. It used all the MGM contract dancers in multiple fantastic costumes (one of the movie’s Oscars was for costume design). It seemed as though everyone on stage received a close-up, and all faces showed full commitment to their movements and characters. The sequence is a very strong work of collective genius, and this reviewer can recall few others in the movies. The sequence was the end of the movie, but not the actual ending. The dream sequence was blighted by two added-on scenes that were required to meet the then-current standards of shallow and trite happy endings.

Singin’ in the Rain 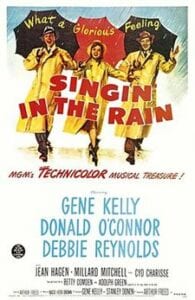 Singin’ in the Rain was released in 1952. The dancing cast included Donald O’Connor, Debbie Reynolds and the fabulous Cyd Charisse. They could all stay on the dance floor with Gene Kelly, but Debbie Reynolds was certainly no Leslie Caron. Her strength was singing, and that talent was showcased to great effect in the film. Donald O’Connor showed surprising gifts in movement, and he revealed an easy, relaxed comedic gift while playing the goofy side-kick Cosmo Brown. O’Connor’s “Make ‘em Laugh” comic routine was so loaded with pratfalls that it became uncomfortable to watch, except of course for those with a high schadenfreude index. 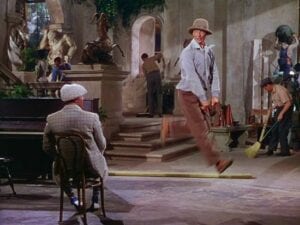 The movie in terms of its plot was a strong comedy. Kelly’s character, Don Lockwood, was a silent movie star with huge potential, right at the moment when talking movies came in. His contract co-star, played wonderfully by Jean Hagen as Lina Lamont, was exotically beautiful but had a screechy, nasal Midwestern voice with grammar to match. This scenario was mined to perfection for its laughs.

The title solo by Kelly had a feeling of inevitability because of its title, but the whole sequence had an incredibly light feel to it, with no sense of portentous anticipation. Its fame is well deserved. 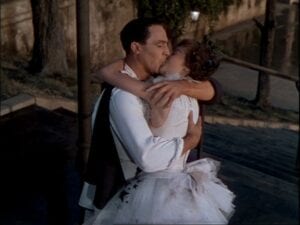 The vast production number “Gotta Dance/Broadway Melody” is the corresponding number to the long finale of American. A lengthy dream sequence again, it featured Kelly and Cyd Charisse’s love duet on a deep abstracted stage that gave full value for creativity beyond all ken. The stage was bare with a few perspective lines drawing to an indistinct horizon, and the space was filled with strong, blowing winds. Kelly was in black, Charisse was in a white costume with at least a 25-foot train. Their contact duet was full of ballet tropes. Repeatedly Charisse withdrew from Kelly, leaving his arms and legs wrapped in her long train. She backed away, slowly pulling the train away from him. When free the train stood straight up, vertically, in the high wind. This was the finest choreography of fabric one has ever seen, and clearly it symbolized the entanglements of the heart, mind, and spirit in relationships, and also the liberation one feels when disentangled. Charisse’s character remained a long-distance fascination in Kelly’s dream sequence. Elsewhere in it, the dream sequence Lockwood (Kelly) seeks dance employment in Broadway burlesque reviews, including the über-pretentious Ziegfeld Follies. In each scene the same MGM studio dancers portrayed burlesque chorines in different skimpy costume sets, in each scene singing the same song. One can hear the snide guffaws all the way from 1952.

View these films any way you can. They don’t make ‘em like this anymore.

Background information on Kelly and Astaire was sourced from Wikipedia for this article.

Cover photo credit: Still from An American in Paris by Bobby Rivers