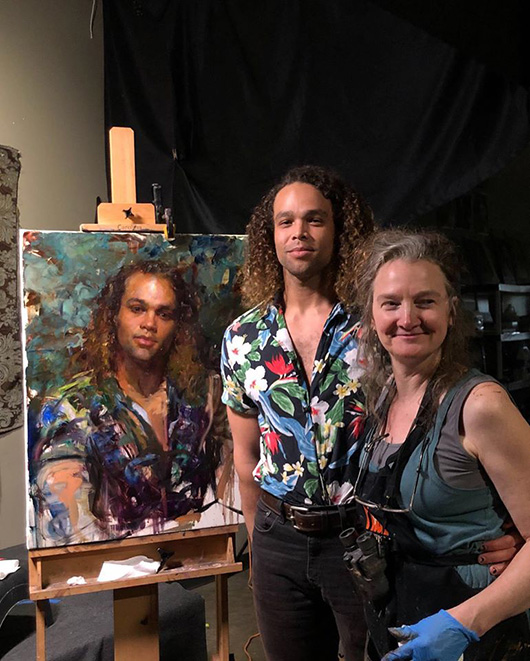 A crowd of 80 people sat in a meeting room in Canopy Studios recently quietly watching an oil painter working on an image of a young man sitting in front of her canvas and paint palette. It was Saturday night, when Austin’s fashionable watering holes, movie houses, and vibrant live theatre shows were attracting anyone needing entertainment. But the crowd here was intent, studious, and taking notes and cell photos. The focus was the painter, Rose Frantzen, giving an art demonstration as the culmination of her two-day workshop on alla prima portrait painting. Atelier Dojo, the still-new private art academy in Austin, sponsored Frantzen’s workshop.

Alla prima means “all at once” in Italian. It implies direct application of paint to canvas until the desired image is achieved. Frantzen is a master of the practice. While she finished the painting subject of the demonstration in about 3 hours, she discussed taking 10 to 12 hours for celebrity and other important commissions. Here lies the germ of the controversy surrounding alla prima. If one takes a break, a nap, stops for the night and comes back in the morning, or if the paint dries on the canvas and one comes back to it for more painting, is it still “all at once?” The issue was raised by Atelier Dojo manager Justin Balleza in the demonstration, with a discussion in debate by Frantzen, who talked while mixing pigments on the palette and brushing at the painting. She disparaged the debate altogether. At least, any precise technical answer to the question failed to gain consensus. But while narrating stories and helping gorgeous imagery emerge from the canvas, Frantzen offered several profound bon mots, this reviewer’s favorite being: “at some point the work has to be done.” This may seem trite rather than profound, but later, upon examining the painting’s photorealistic eyes and face overall in closeup after the demo, I will insist to anyone that the statement is profound. She did the work. 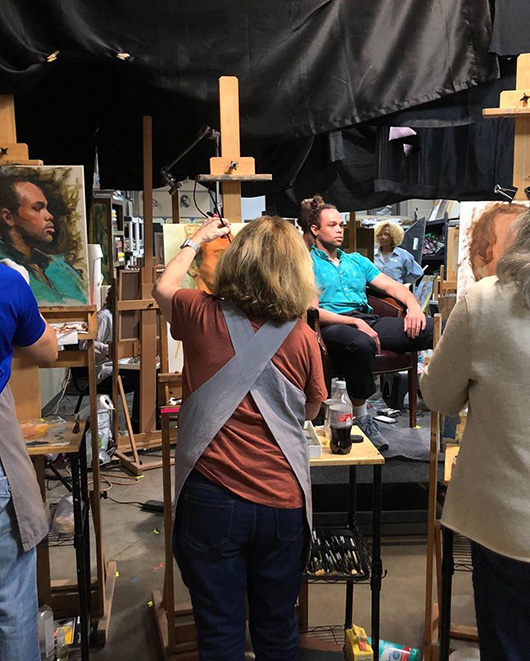 Rose Frantzen is a superstar in the world of figurative painting within the art universe. She makes her living partly by giving workshops around the world. In September, 2020, she will be giving a ten-day workshop at various locations in Provence in the south of France. Her workshop at Atelier Dojo in Austin, now finished, is one of a series of workshops by visiting masters offered yearly by Atelier Dojo. Pursue your interest on the Atelier Dojo website.