When Kathy Dunn Hamrick approved my request to write a backstage blog of the 2019 Austin Dance Festival for ArtProfiler, neither of us really knew what such a document would be. Usually I write reviews criticizing and evaluating performances of dance and theatre, and I observe them from the seats in front of the stage where typical ticketholders sit. But a blog implies a first-person narrative, at least most of the time. And referring to it as a backstage blog means that I could only observe dances from the wings, a task accomplished by much neck-craning from backstage while staying out of the way of dancers exiting and entering. Happily, no collisions interrupted the flow of the performances.

Why write about the Austin Dance Festival? 2019 saw the fifth iteration of the festival at Austin Ventures Studio at Ballet Austin. The festival has grown in scale and concept from its origins as a one-day fundraising event at Café Dance in northwest Austin to a three-day phenomenon in downtown Austin. The series offers two professional dance showcases, two youth dance academy showcases, various pop-up dances, master classes, and the Dance on Film series in addition to archived video interviews of presenting choreographers. Furthermore, a large studio room outside the theatre was filled with media presentation tables and boards, chocolate, gourmet cookies and a general wraparound networking environment. This last feature was possibly the single most valuable gift to the scores of dancers, choreographers and producers who passed through the festival. 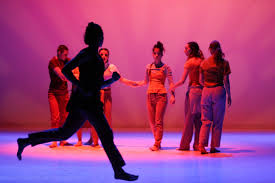 The first day of the ADF 2019 edition was easy work for me. The primary activity was the evening showing of Dance on Film, a film festival of invited short works. The films are dances created for cinema, not filmed staged dances, and not film documentaries about dance. A large screen was set up in the Austin Ventures Studio theatre for this showing.

There was no backstage work to be done. I had also received an invitation to the reception beforehand for the guest dance artists and filmmakers. I showed up in my going-out evening wear. Dancers love to chat. Many love to drink wine.

Everyone fled to the theatre downstairs when the doors opened. The audience showed great enthusiasm for the event, and the large theatre was three-quarters full. This fact alone set the tone for the show and the belief among many that dance pieces on film are an important turning point in contemporary dance. Films showing dance as their subject were submitted and juried by the project directors, Ilana Wolanow and Lisa Anne Kobdish. They chose thirteen films among scores of submissions.

It is impossible to give full reviews of the excellent films in the show in this web blog. Thumbnail comments are all that are possible for this superior rank of subgenre films. A few commonalities are worth noting. A common thread in many of the films was the removal of dance from studio and stage to other urban and natural environments. This intentional recontextualization of energetic movements gave an otherworldly quality to them, especially when they were contrasted with other people in everyday, pedestrian movements. Choreographers and dancers also seemingly chose rapid paces and extreme distal spokes, sweeps with the arms, and incessant ball-changes apparently to help movers stay in frame. This latter habit gave many of the dances the same staccato rhythm.

I admit my pro-dance biases, so I have to write that it seemed to me that the festival films that were to me a cut above the others were those that were written and directed by choreographers, not by purist filmmakers. One hopes this field of endeavor continues to grow in the direction of blending dance fantasy and everyday reality, whether by motion-capture digitalia (Invention in Three Parts: Development II — below) or any other means. 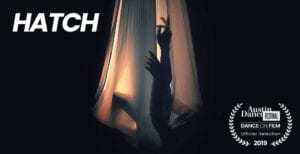 HATCH. Whether from actual egg shells or from live birth, we’re all hatched. Director Jeff Schick gave choreographic directions in live (but not on the soundtrack) to dancer Lavinia Vago, who emerged nude from a suspended hammock, the egg. Eventually she stood fully formed in the fullness of the awakening of the self. The soundtrack was a set of recordings of philosopher Alan Watts. “HATCH” was a crowd favorite and a good lead-off piece.

The Subtext. The dance in this film was a dream/reverie about a relationship and its breakup. It offered cinema’s advantage in changing time and space at will. The dance was a melancholy tap solo by Anthony Morigerato. His performance showcased the high emotional power of modern tap.

Flowers in My Head. This was a dream-space romantic fantasy with flower petals falling all around. The piece had the look of music videos of the 1980s. The work was highly edited, with many extremely short takes and close-ups of feet, leaves, etc. The result was very slick; kudos to the editors.

Glamour Baby. This was a facile comedy piece, stemming from the comedic image of a male dancer soaking in a bathtub filled with gummi worms. Needed a big finale.

Better Shape Up. The piece had a strong industrial atmosphere with inflections of AI (artificial intelligence). Austin dancer Taryn Lavery stood in an abandoned warehouse. Director and performer Mattias Alegro Marasigan walked up behind her and appeared to turn on her dance. The dancer moved dramatically through many of the rundown interior spaces. The director stopped her, turned her “off.” He left and she stayed, motionless.

LADIA. This was a solo of a woman finding her power in dance. Many of her commanding gestures were highly affecting. The dancer was Sandra Kramerova.

Hopak. This dance film showed clearly why it needed to be a film. The dancers were the members of the Brigham Young University International Folk Dance Ensemble, who created a period costume piece performed partially in an authentic set The dance was a Ukrainian or Russian folk dance. The lengthy piece cut sharply back and forth between the traditional interior set and an outdoor setting in front of beautiful Utah mountains. The cuts didn’t miss a beat or a step of a booted foot. The verve and energy of folk dance was heightened by the cinematography. This was a truly mutually beneficial marriage of cinema and dance.

What Is Real? A strong and poignant counterpoint to the above comments about dancing to stay in frame, this was a dance story about a young, homeless, mentally ill man sitting on a bench on the street. The film had the esthetic of the flower growing out of concrete, which is to say it had astounding improbable beauty. The man performed only on the bench until the end when he walked away down the street. His attire was homeless street gear, and he avoided eye contact with passersby. A voiceover conveyed his inner thoughts, and lively movement took place with his hands and arms. These movements, from fingers to arms and shoulders, built in their dynamics and took on the duties of the inner voices, but out in reality–even as the inner verbal voice questioned that reality. The clawing fingers and sweeping arms seemed to be clutching for something to hang on to, something to calm the inner storm. We wondered which competing realm would prevail, but we enjoyed the high rich harmony between them. The conceptualization of this piece was superb, almost unique, and the editing seemed flawless.

Invention in Three Parts: Development II. This was the motion capture/digital piece. Dorothy O’Shea Overbey and Deepak Chetty created the piece by capturing dance motion from UT’s Dance Repertory Theatre students. Direction of the piece was almost entirely on the computer. Innovative motion is enchanting whether witnessed live or in digital.

Trophy Wife. This was a story dance about a woman who is imprisoned by her cheapness, a rare insight. The piece had an old foreign film look with very narrow camera angles, including the exterior shots along a railroad track. A woman danced on a cabaret stage. She was not a stripper as she wore clothing the entire time, but the narrow camera angles showed her only from the waist up. The only clever innovation was that she was painted gold—face, neck, and arms; talk about overdone.

Fates. This was a highly lyrical and symbolic dance by six women and one man. The film was sepia-toned or in low saturation color. The look and the women’s styling and print costumes made them look like they were part of the deep landscape all around them. They very effectively conveyed the struggle of rising from the mud and at times falling back into it.

Dreamland. The soundtrack was a song composed around Lewis Carroll’s poem “Dreamland.” A male dancer, Paul Vickers, danced through an empty warehouse to the soundtrack. The film was similar to “Better Shape Up” but without the AI.

Happy Ending. This was a high-concept composition that was visually all over the lot, thus close to 90s music videos. Supposedly a tribute to Israeli psychic Uri Geller, beyond a few stills of forks (Geller’s psychic ability was supposedly the bending of forks and other small metal objects), the film had few direct or symbolic references to Geller. A costumed duet in a styling salon was interesting but wasn’t long enough.

Digital Afterlives. The piece projected onto the screen multiple images of a single dancer (Richard James Allen). There was very little actual dance in the piece, but many cut-out figures, computers and servers, etc; they were moving, disappearing, swirling and repeating. The digital afterlife theme was obvious– digitized images of the self fed into computer servers and available for review eternally.

At the end of the show the crowd was encouraged to vote for their three favorite films. The crowd favorites were:
1. Hatch
2. Digital Afterlives
3. Fates
4. Happy Ending