The third day of the Austin Dance Festival culminated in two performance showcases by youth dance academies. Ballet Austin bulged at the seams for both of them. The place was filled with people—youth dancers, choreographers, families, teachers, friends, professional dancers, producers, and various other u-name-its.

Backstage was happy chaos. The excitement level was much higher than among the professionals yesterday. The companies had teacher and parent supervision in their parking studios, but the students showed great personal discipline while waiting in the wings to go on. BTW, the selfie revolution is still going strong. The stage managers were efficient in their jobs, having built their skills and familiarity with the vast space yesterday. If anything, the shows ran more smoothly today than yesterday. A total of twenty-one academies came to ADF and performed in the two youth showcases. 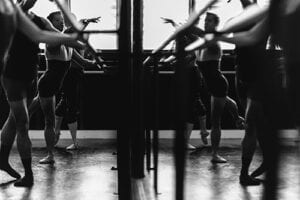 The shows and the many performances by committed young performers left everyone in attendance with abundant images of inspiring movement. The companies wore matched costumes that were often dazzling. They danced to classical music or popular music, sometimes to mixed pieces. I can’t imagine any parent or non-parent who was not happily satisfied by the performances they saw there.

The format of this blog is modified from last week’s edition, for important reasons. Direct statements and descriptions of performance pieces and performers are not helpful to young, training dancers. The young trainees are potentially those most interested in reading observations of their work; such may be misleading, however, and the critiques they most need to hear come from their choreographers and teachers. It is important not to divert the attention of those only now crafting the foundations of their artistic careers. Looked at this way, witnessing their performances becomes even more inspiring. The young academy artists showed us the milestones they have passed on the winding road of their dance careers. They showed us where they have been and where they are going, and at ADF 2019 they gave us a report on where they are now. We are honored.

A final note is needful. The large corps de ballet of the youth companies came with a lot of backstage foot traffic. Getting the companies on and off the Marley took much coordination—it’s the simple things, isn’t it? The stage and house managers made an efficient and smooth-running team: Ilana Wolanow, Rebecca Gamborino, Grace Smiley, Laura Merkel, Erica Saucedo and Lisa Anne Kobdish. The lighting and sound crew brought their foundational arts to every performance. They were Stephen Pruitt and Drew Silverman.