In 1986, writer Sarah Wimer observed Heloise Gold in her performance Watching from the She Palace: “In her bird dance solo, with darting eyes, Gold emitted deep wild cries, tiptoed precariously in tiny, rapid steps, then undulated her arms as though flying.”[1] In 2019, we are happy to observe that Gold hasn’t lost her animal instincts.

The movement of Bird, Bath and Beyond was staged on the venerable hardwood floor of the Austin Scottish Rite Theatre, in front of the old-fashioned proscenium stage. Only the birdwatcher/narrator, played by Kate Taylor, actually performed on the stage level. Most of the seating was removed to give space for Gold’s magical flock of birds. That is what the dancers portrayed for the entire hour of the show in their elaborate, colorful, gaudy costumes. 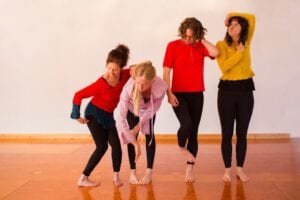 The performance as dance owed nothing to modern/ contemporary technique. And this was refreshing after Austin’s crowded spring season of contemporary dance and ballet shows. At the same time, the performers were required to be skilled and masterful contemporary dancers in order to learn and perform bird dance technique. The very skilled ensemble was comprised of Rosalyn Nasky, Kelsey Oliver, and Kelly Hasandras, performing along with Heloise Gold. The young Lulu Fisher played a migratory bird that flitted, calling and calling, through the show.

As noted above, Gold has been creating bird dances for decades, forming a behavioral language based strictly on Class Aves. In Bird, Bath and Beyond, we see a perfection of the language and Gold’s interest in passing it on to following generations of avant-garde performers.

Gold successfully moves us into the birds’ world, where birds have “conversations” but ignore each other, intimidate each other but quickly act like nothing happened, and above all, continue looking around for juicy bugs or seeds the others may have missed. And don’t forget to groom in the middle of the proceedings if you feel like it. 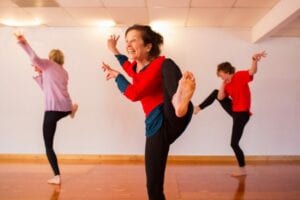 The ensemble learned their bird dances very well. We saw primate humans mimicking another taxonomic class, a penchant among almost all primate species. The primates, including the audience, became absorbed in another animal realm, one with different nervous systems, life stages, reproductive systems, food requirements and digestive patterns. Unlike primates, birds don’t seem to have symbolic capacity or culture. Many bird species assemble in large groups called flocks, but they don’t persist in family units after they learn to fly. The audience followed the dancers with fascination along that path until something even more interesting happened.

Gold addressed the avian trait of murmuration, the still-mysterious quality of large-flock birds, notably starlings, who fly, wheel, dive and make other maneuvers instantaneously, without apparent cueing or signaling. To evoke this feature of bird life, Gold created a brief unison dance, with precise steps, floor pattern, gestures, and accents—all these maneuvers were performed together in lock-step. But this evocation of murmuration had to be learned by primate dancers who don’t innately possess the quality of murmuration. Primates learn to move together often with the primate rhythmic sense. That is how the primate dancers learned and perfected the murmuration dance. The more chaotic bird sounds on the soundtrack were turned down, and rhythmic music and sounds more attuned to primate brains added to the remaining soundtrack birdcalls. Thus reality primates could key into familiar rhythmic music and produce a tight unison dance that evoked the unexplained avian quality of murmuration. Then the brief dance ended and music and behavior returned to more randomized bird values. Gold had solved an interesting choreographic problem with a clever and subtle device. 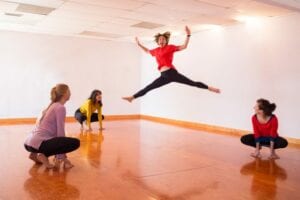 Gold’s Bird, Bath and Beyond shows that Gold is still on the edge of avant-garde performance. On the edge of the edge as it were. Her cleverness and commitment to wildlife are vehicles, too, for the keen humor that permeates all her shows. Natalie George Productions ensured the high production values we’ve come to expect of Gold’s shows. They are not to be missed.

Previous Article
James Surls: With Out, With In (Art Review)
Next Article
Jennifer Ling Datchuk: Truth Before Flowers – Art Review