Blackface – Is it Really Racist?

Blackface – what is it, and why is it racist?

I’m glad you asked! Everyone should know this term by now, but sadly, many don’t. That may be a failure on the part of the US education system to teach accurate Black history, or it could simply be that there are a lot of ignorant people here who have a difficult time facing the ugly truth about our country’s racist underbelly. 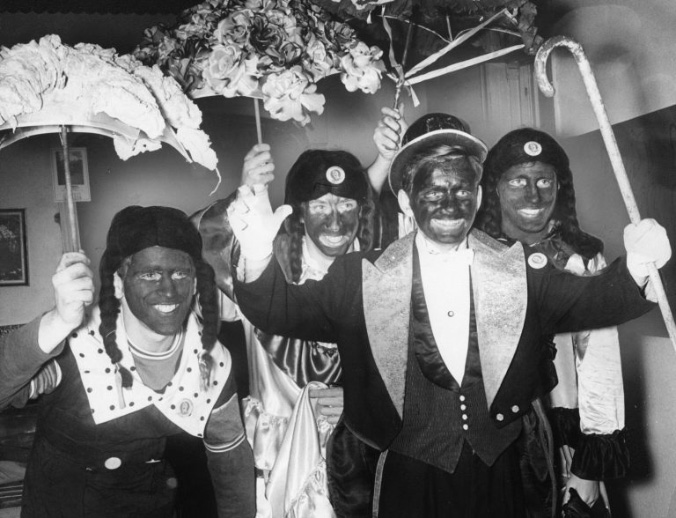 Blackface is the term used when a white person paints his or her face black to entertain others, as a Halloween costume or for any other reason to portray the persona of a Black person. That’s the contemporary definition. 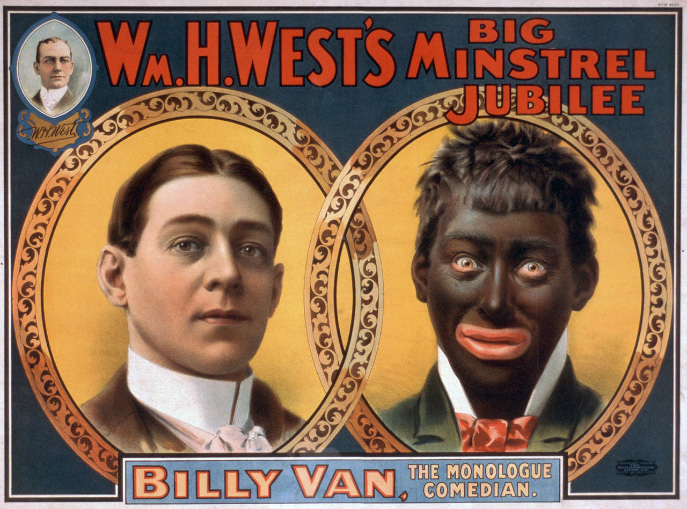 This reproduction of a 1900 William H. West minstrel show poster, originally published by the Strobridge Litho Co., shows the transformation from “white” to “black.”

But blackface has a long history, even though historians can’t come to a consensus on its exact origin. Journalist and cultural commentator John Strausbaugh dates it back to 1441, when West African prisoners were displayed in Portugal, while others say it started in the 1600s in Elizabethan and Jacobean theatre. However, these early appearances of blackface did not involve the caricature of Blacks like it did later in the US, where it gained popularity during the 19th century by way of minstrel shows—a distinct form of American entertainment that developed in the early 1800s and persisted for nearly 200 years. The practice of painting one’s face black, and the popular characters blackface portrayed, played a huge role in shaping perceptions and racial stereotypes about Black people while providing a safe outlet and acceptable method for white people to express their collective fear of the unknown and to maintain symbolic control over Blacks. 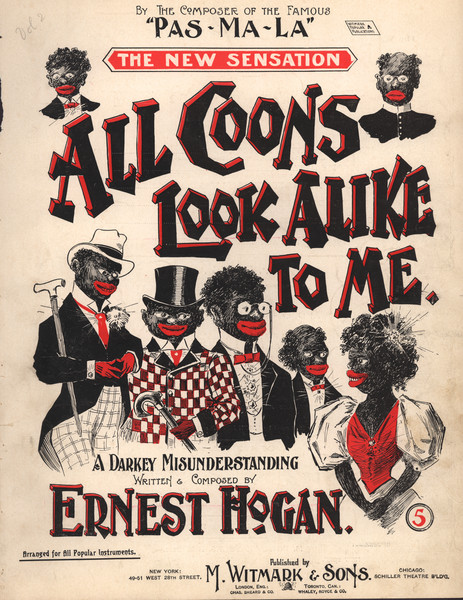 All Coons Look Alike To Me (1896) | This is perhaps the most famous and infamous of all the coon songs, its subtext being the unwillingness of white society to perceive a Black person as an individual.

Minstrel shows were intended to be funny to white audiences and took place against the backdrop of a society that considered Blacks inferior in every way. The shows used white actors who wore blackface makeup (using burnt cork in the early days, and later greasepaint or shoe polish to darken their skin and exaggerate their lips) and implemented comic songs (that degraded Blacks) and, what they called, historic African dances. But the lens was distorted because the shows were created from a white person’s perspective of African culture. Blackface characters spoke in ersatz black dialects and represented caricatures of Blacks as buffoonish, lazy, superstitious, cowardly, and lascivious—characters who stole and lied, and who were promiscuous, ugly or dumb. Enslaved Africans were the butt of jokes that desensitized white people to the horrors of slavery, all the while confirming white people’s notions of superiority (which still exist today). Popular minstrel characters were the matronly Mammy, played by a white male dressed in drag and appearing as an unappealingly mannish woman, and the Pickaninny, depicted with bulging eyes, unkempt (wool) hair and wide mouths into which they stuffed large slices of watermelon. There were many permanent characters in the minstrel show, none of them flattering. It was the white comic actor, Thomas D. Rice, who truly popularized blackface when he introduced his song and dance , “Jump Jim Crow,” to the stage in 1828. Rice toured the US performing under the stage name “Daddy Jim Crow.” Jim Crow would later become the shortened name of the statutes that codified the reinstitution of segregation and discrimination after Reconstruction. 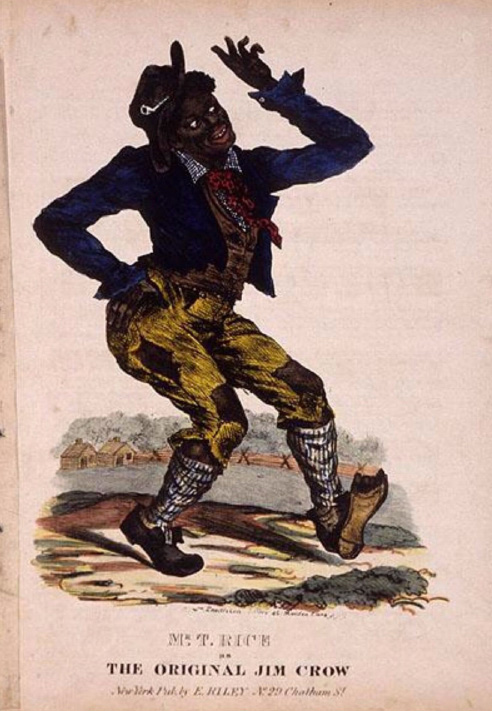 Interestingly, Black performers eventually began to dress in blackface and do their own version of the minstrel show, which was billed as “authentic” and “the real thing.” It was the only way a Black person could take to the stage and earn a living as an actor, musician or dancer, though their salaries were, of course, considerably lower than a white performer’s. (It still beat the menial labor they were used to, and whites didn’t want to see them onstage in any other form than foolish.) The Black blackface shows placed the focus on “plantation” material instead of the nasty racist stereotyping of their white counterparts, and they particularly excelled when it came to the execution of authentic Black music, especially when they used their hands and feet as percussive instruments, clapping and slapping their bodies and stomping or shuffling their feet. Their blackface productions also contained buffoonery and comical scenes, but by way of self-parody. In the early days of Black involvement in this genre, they weren’t allowed to perform without blackface makeup, no matter how dark-skinned they were. And in the 1860s, some of these “colored” troupes totally violated this rule—they would “cork up” (paint their faces), but they would paint themselves in various surprising hues. Their Black audiences recognized these performances as caricature, but enjoyed seeing their own culture recognized and reflected. And some of these performances, when not taking place in the South, poked fun at the racist attitudes and double standards of white society—they satirized white behavior. Blackface minstrelsy, as ugly and prejudiced as it was in its American roots, did open the door to mainstream American show business for Black performers. 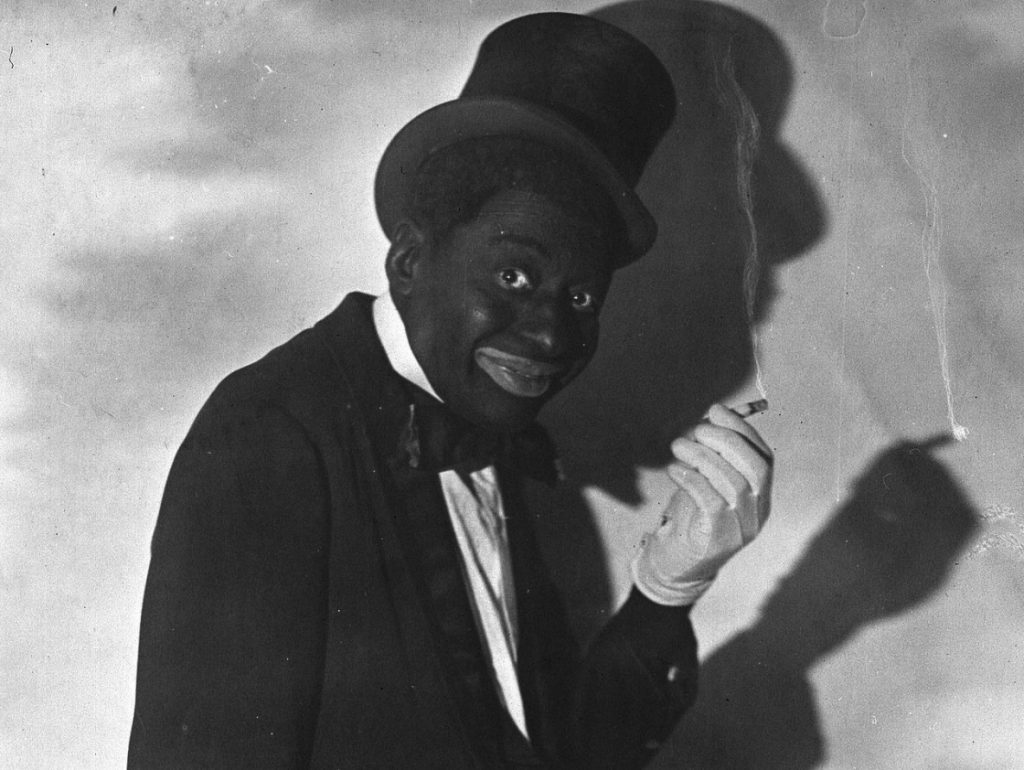 Shown here in blackface, Bert Williams was the highest-paid Black entertainer of his day. (circa 1910)

When the popularity of minstrel shows died off, vaudeville and white Hollywood continued the reign. Blackface performance was featured prominently in cartoons and film into the 1930s and included some of America’s most famed white actors—Fred Astaire, Joan Crawford, Mickey Rooney, Doris Day, Shirley Temple, Judy Garland and Buster Keaton, to name a few. Blackface minstrel shows were common into the 1950s, but by that point, the NAACP had mounted a campaign to put an end to blackface performances and depictions (blackface was used in the branding of everyday products throughout the 1900s). And with the eventual success of the Civil Rights Movement, these blatantly racist practices ended. We are now planted firmly in the 21st century, and due to changing attitudes about race and racism, blackface as performance is now an American taboo considered offensive, disrespectful and racist. (Finally.) 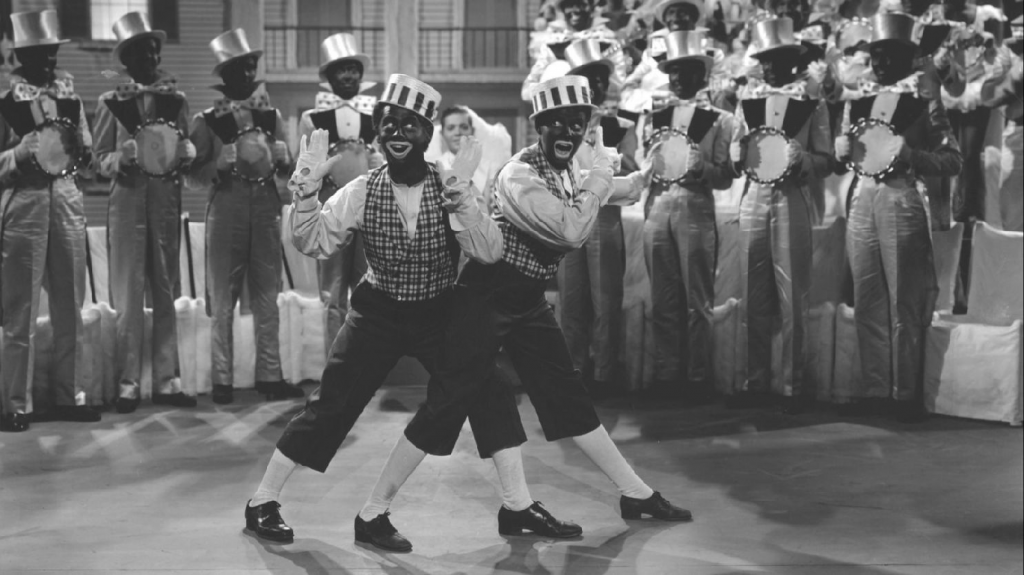 However, we have entered the high-tech digital age, which has provided opportunities for whites to play the persona of a Black person without actually painting his or her face. There is the stereotypical vision of Black men as strong, athletic, powerful and sexually potent, and there’s no better way to be that Black man than by way of controlling his avatar in a video game. In 2016, there was major controversy over a Bob Marley filter on Snapchat which allowed users to superimpose dark skin, dreadlocks and a knit cap over their own faces. And there has been criticism from African American writers over a white person’s use of black-skinned emojis, which has been coined “digital blackface.”

There have been other inflammatory incidents in recent years that have caused a controversial stir. In 2003, Jimmy Kimmel donned black paint and used exaggerated African American Vernacular English to portray Karl Malone of the NBA. Comedian Fred Armisen (of Venezuelan and Korean descent) imitated President Obama in 2008 on Saturday Night Live. Julianne Hough dressed as “Crazy Eyes” from Orange is the New Black for Halloween in 2013. In a turn in the right direction, however, popular TV shows featuring characters in blackface—The Golden Girls, The Office, 30 Rock and Scrubs—removed episodes from circulation in the wake of George Floyd’s murder. And companies have recently made the decision to remove racist branding from their labels—like PepsiCo’s Aunt Jemima syrup, whose label displayed a Black woman’s face based on the minstrel show character, Mammy. 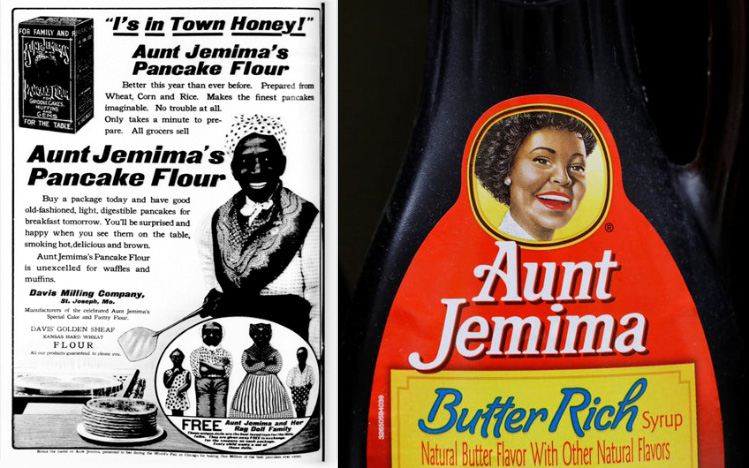 It is my hope that we are finally understanding that it improper and cruel to use someone’s skin tone as a costume. For those who still defend using blackface as “all in good fun” or “just a joke” or “harmless,” you no longer have the option to live in ignorance—ignorance, in itself, is privilege. And white privilege is being called out left and right in 2020. Do you really want to be on the side of history that chooses willful ignorance over knowledge, or even just… kindness?

Perhaps David Leonard, chair of Washington State University’s department of critical culture, gender and race studies, explains it best in his 2012 Huffington Post essay, “Just Say No to blackface: Neo Minstrelsy and the Power to Dehumanize”:

Blackface is part of a history of dehumanization, of denied citizenship, and of efforts to excuse and justify state violence. From lynchings to mass incarceration, whites have utilized blackface (and the resulting dehumanization) as part of its moral and legal justification for violence. It is time to stop with the dismissive arguments those that describe these offensive acts as pranks, ignorance and youthful indiscretions. Blackface is never a neutral form of entertainment, but an incredibly loaded site for the production of damaging stereotypes…the same stereotypes that undergird individual and state violence, American racism, and a centuries’ worth of injustice.