Did you know the Boris Lurie masterpiece from 1961 protests US Government assassinations of foreign leaders? Just wait until you see the rest of his work! 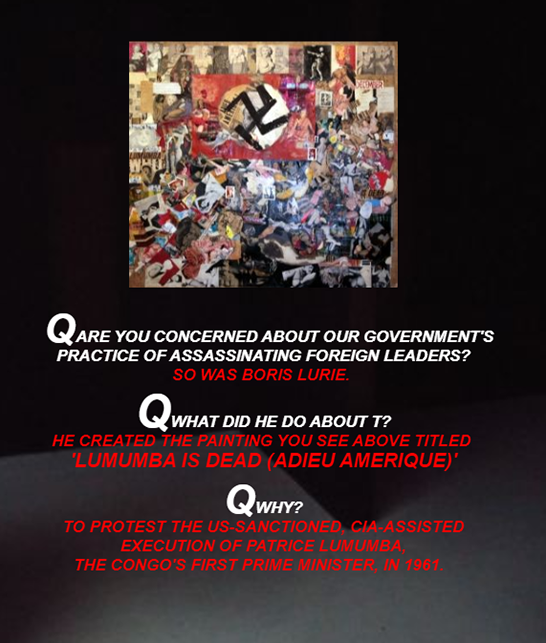 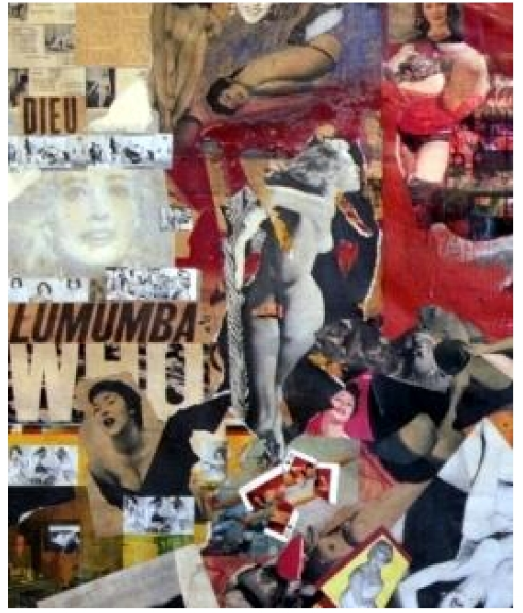 BORIS LURIE IN AMERICA: He had the courage to say NO!

Political art half a century ahead of its time

Our president’s recent decision to have Iranian Maj. Gen. Qasem Soleimani assassinated, and to brag about it, has focused attention on a practice most presidents have engaged in with great caution and almost always with deniability, which means the assassination could never be traced back with absolute certainty to the United States.

The reason for this caution, before and since (until now), became apparent in 1975, when a select committee of the U.S. Senate, headed by Senator Frank Church (D-Idaho), revealed the CIA’s involvement in the attempted assassinations of several foreign leaders, including Patrice Lumumba of Congo, Rafael Trujillo of the Dominican Republic, Ngo Dinh Diem of South Vietnam, Gen. Rene Schneider of Chile and Fidel Castro of Cuba.

Recent polls show assassinating foreign leaders is not a practice most Americans approve of while, in the specific instance of Gen. Soleimani, the overwhelming majority thinks it was a “reckless” decision to have him killed that will make us less safe. No one seems to remember that two Republican presidents signed executive orders also making his murder illegal.

Moral and legal questions aside, political assassinations tend to have unforeseen and often counterproductive consequences for the perpetrator nation, even when the perpetrator nation’s identity cannot be firmly established. That was certainly one of the messages Boris Lurie tried to convey in his little-known masterpiece, Lumumba Is Dead (Adieu Amerique) from 1961, which I think will one day be recognized as one of the 20th Century’s great anti-war paintings.

The subject of Lurie’s prescient masterpiece, Patrice Lumumba, was prime minister of the then-newly independent, former Belgian Congo. His execution, by firing squad in January 1961, was carried out by rebel soldiers loyal to Belgium’s King Baudouin, with arms supplied by the CIA after the CIA’s earlier attempts to assassinate Lumumba had failed. 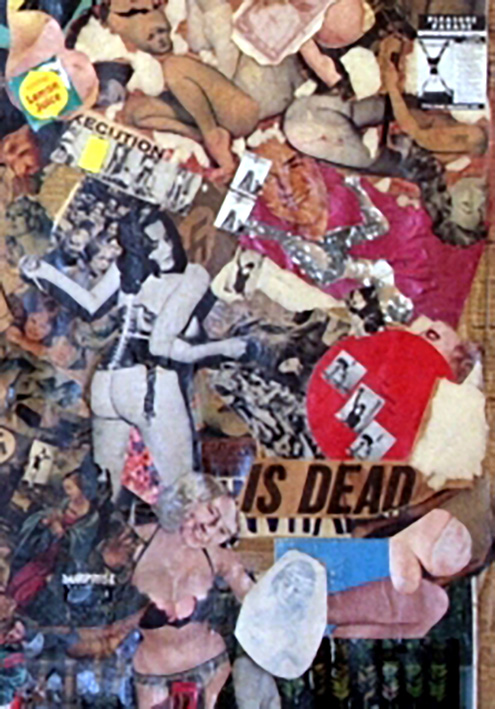 A nationalist portrayed by the State Department and White House as a communist, Lumumba’s death warranted headlines in New York, which Lurie affixed to his Lumumba collage to give it the urgency he felt the subject deserved.

One of the unintended consequences of Lumumba’s execution was the death, eight months later, of UN Secretary-General Dag Hammarskjold, killed when his carefully-maintained DC-6 crashed while on a peace mission to the Congo.

It has always been assumed Hammarskjold’s plane was sabotaged, quite possibly by the KGB in retaliation for Lumumba’s death.

Although never proven conclusively, Moscow’s view of Hammarskjold’s peace effort is plain to see in a famous propaganda poster portraying him as a handmaiden of the West, with dollars coming out of his pockets, issued shortly before Hammarskjolds’s death in 1961. 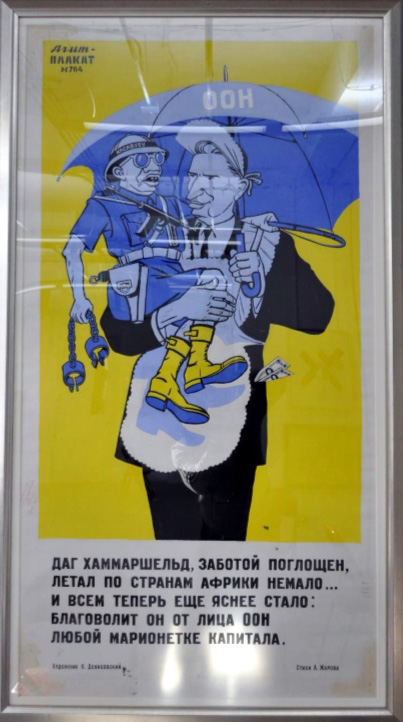 I was lucky enough to purchase the original painting from which the poster was made 30 years later, shortly before the Soviet Union collapsed and the Cold War paused, in December 1991.

The State Department’s own official history of the Congo crisis confirms what Lurie was most worried about, that the postwar rivalry between the United States and the Soviet Union would turn the decolonized nations of Africa and Southeast Asia into Cold War battlefields. The decolonization of Sub-Saharan Africa from the late 1950s to the mid-1970s resulted in several proxy Cold War confrontations between the United States and the Soviet Union over the dozens of newly independent, non-aligned nations. The first such confrontation occurred in the former Belgian Congo, which gained its independence on June 30, 1960.

What this first post-colonial African intervention by the United States looked like to Lurie was the beginning of a repeat of the kind of aggression that ignited World War II. With the significant difference that in the nuclear age, a war between the two superpowers would likely include the use of nuclear weapons. Lurie feared that the United States would not only “win” a nuclear war with Russia, such a war would result in the destruction of the country where he was born and the genocide of the Russian people—whom Lurie greatly admired—not because of their religion but because of their government’s Marxist ideology.

Lumumba Is Dead (Adieu Amerique) was Lurie’s plea for sanity and respect for human life only 16 years after he himself was liberated from Buchenwald in 1945. Having survived nearly four years in Hitler’s gulag of work and death camps beginning in Riga in 1941, he vowed to himself that he would spend the rest of his life trying to teach the lessons of the Holocaust, as he understood them, to a world which seemed not to have learned them at all.

The painting also reflected Lurie’s disillusion with the United States, which he had come to see as a racist, anti-Semitic country which demanded social conformity and ideological purity of its citizens, with a White Anglo Saxon Protestant ruling class intent upon enslaving the rest of the world using a combination of military force and an appealing but fake ideology that permitted supporting corrupt and brutal dictators, as long as they professed to be anti-communists, in the name of freedom and democracy.

Needless to say, his view of the United States and the Cold War was not shared by many Americans in the early 1960s. And equating Hitler’s Germany with the United States, which is what he did in Lumumba Is Dead (the swastika at the center of the painting represents the United States), earned him the opprobrium of the New York art world for this and many other reasons.

Yet today, his warnings against political assassinations and the use of our military might to remake the world in our image or to further the partisan political interests of our president seem more prescient than radical, while the activist, political art that he championed is beginning to be accepted by the critics, collectors and curators he detested.

Would anyone today argue we should have fought the war in Vietnam, invaded Iraq or tried to impose democracy on feudal Afghanistan? Does anyone think assassinating Gen. Soleimani won’t hasten the day Iran has a nuclear weapon—and with it, the capability of starting World War III, the nuclear war Lurie warned us not to provoke in 1961?

Half a century later, will Boris Lurie finally be given the recognition his art deserved, half a century ago? 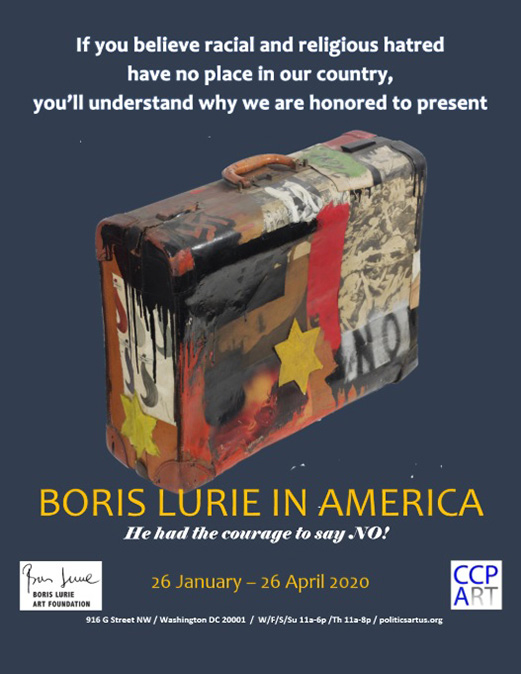 THE CENTER FOR CONTEMPORARY POLITICAL ART is a 501-c-3 nonprofit corporation registered in the District of Columbia. We wish to thank the Boris Lurie Art Foundation and our other donors for their generous and continuing support. For more information, please go to politicsartus.org