From the Editors 6 months ago

Update: This article has been updated to reflect the number of brain injuries at 64 total (from 34) when article was originally published.

On January 8, 2019, Iran successfully launched a missile attack at the US al-Asad military base in Iraq in retaliation for our drone strike which killed top Iranian general Qassed Soleimani. A few hours later, Trump addressed the nation declaring, “No Americans were harmed in last night’s attack by the Iranian regime.”

But that wasn’t true. In fact, 64 US troops have been diagnosed with concussions or TBI (traumatic brain injuries). When this information became available, Trump was in Davos, Switzerland, for the World Economic Forum (just another opportunity for him to embarrass himself and our country). He dismissed the troops’ injuries with, “I heard that they had headaches, and a couple of other things. But I would say, and I can report, it is not very serious. Not very serious.” 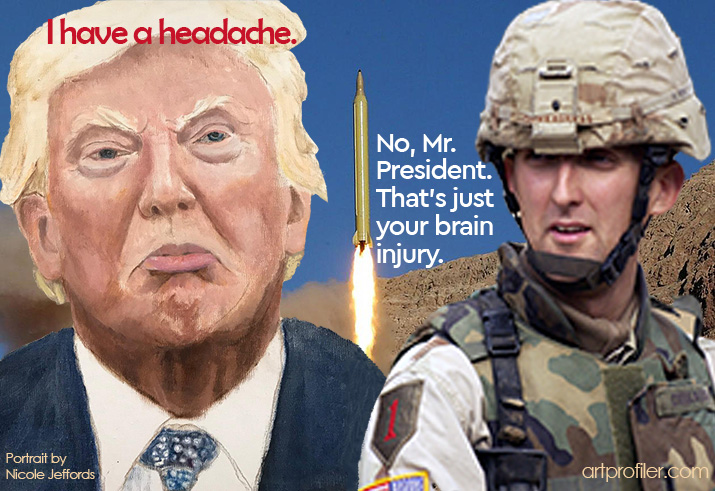 You know what’s not serious? The president. He’s a laughingstock with the intelligence and foresight of a six-year-old, and an impulsive liar to boot. No doubt his immediate claim that no Americans were harmed stemmed from his extensive egotistical need to best the Iranian president, Hassan Rouhani. Hahaha! Your missiles didn’t hurt us, nanny nanny boo boo. I wonder how our 64 troops with brain injuries feel about his lack of solemnity?

Pentagon spokesman Jonathan Hoffman acknowledged that the number of injuries reported by the Pentagon over the past couple weeks has shifted, which he attributed to the time it can take for brain injury symptoms to develop. So, why doesn’t the president 86 the compulsion to impress (with lies) and wait it out so that the American citizens, and more importantly, our troops’ families, know what’s really happening? The answer: he’s a raving lunatic. I’d like to know what his brain injury is.