ArtProfiler’s Artist Monthly series highlights one artist per month for exceptional work in his or her chosen medium. This month we chose to feature Austin-based photojournalist, Camille J. Wheeler.

Camille J. Wheeler is a veteran journalist with a diverse background in newspaper and magazine writing, reporting, and editing. Her career includes tenures with the Austin American-Statesman and Austin-based Texas Co-op Power magazine, the state’s largest-circulation monthly publication where she served as staff writer and associate editor.

Wheeler began a serious pursuit of photojournalism in 2014, and in 2016 she launched her current project: the photographic documentation of the homeless community in downtown Austin. She is expanding her work to include all of Austin, and by invitation she has donated hundreds of her images of the homeless population to the Austin History Center for the creation of the Camille J. Wheeler Photographs catalog.

Wheeler has exhibited her street images by invitation in photography shows in San Antonio, Fort Worth, and Austin. As a street and documentary photographer, she focuses on Austin’s homeless community, civil rights issues, and the history and cultural narratives of East Austin. She is drawn to the faces and the stories of the marginalized: those people found in hidden pockets of diversity and those who slip between the cracks of society. Wheeler searches for the narratives of the human experience as she explores the social architecture of Austin. She chases the stories of the street, sitting, kneeling, shaking hands, hugging folks, and rejoicing in the resilience of the human spirit.

Below are short excerpts written by Wheeler about the subjects of her photographs. (You can also read her stories in the portfolio above by clicking on the images.) 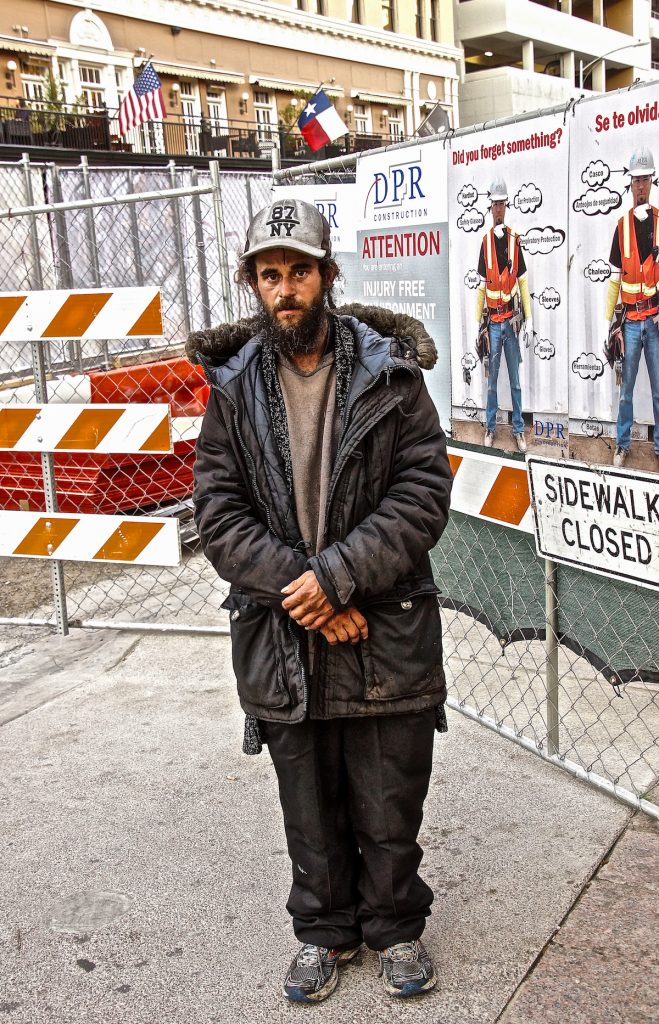 In the winter of 2016, I began documenting the homeless community in downtown Austin. One of the first portraits I took was of a man named David Watkins, whom I met at Congress Avenue and Seventh Street, where the Aloft/Element Hotel was being built. It was a mild winter day on February 19, but David was wearing a heavy coat with a fur-lined hood. I sensed his vulnerability, and I think he felt mine. David said he was from a small town in Central Texas and that he was living on the streets. He agreed to let me take his photo, and with virtually no prompting, he struck a somber and regal pose in front of the hotel construction site.

Looking back, I realize I was seeking connections. My life was in transition, with much discomfort and pain, and I was desperate for conversations with no filters. Just raw truth, like the kind I saw that day in David’s dark brown eyes. I started exploring the city’s downtown streets in earnest, meeting individuals from all walks of life. Hoofing it on foot, I experimented with trust — asking people to let me get close enough with my camera to capture the stories etched in the grime and in the lines on their faces. 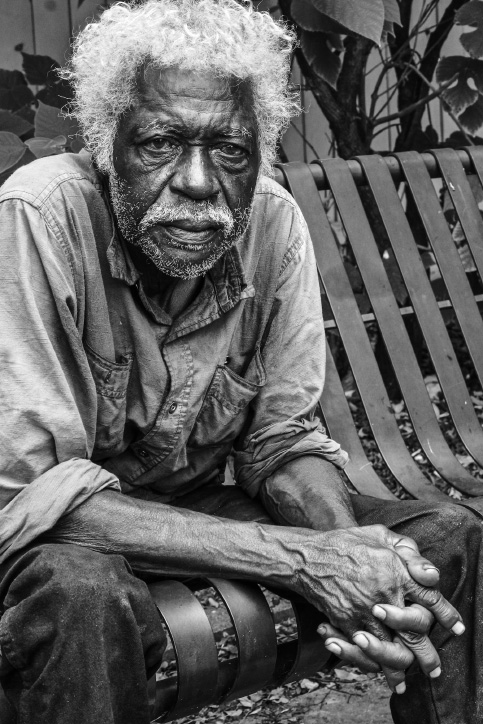 On August 4, 2018, I met Thomas Debolds, a 69-year-old military veteran who was living near downtown Austin on East 11th Street. Thomas, who served almost four years with the U.S. Navy during the Vietnam War, grew up near the Central Texas towns of Smithville and La Grange, where he fed chickens and cows on his stepfather’s farm. “I’m a country boy,” he said, agreeing to let me take his photo in exchange for getting him some fresh tomatoes from a nearby store.

I love taking people’s portraits and trying to capture the narratives in their eyes. I was equally drawn to Thomas’s strong hands, the dirt beneath his fingernails, the veins in his arms, and his rolled-up sleeves and weathered shirt collar, all of which held their own stories.

Once, when I stopped back by to check on Thomas, he was sound asleep on the bench where I had first discovered him. I didn’t want to wake him. I got back in my car, drove to a store to purchase a gallon of water, and then returned to his makeshift campsite, leaving the water on the ground under the bench. 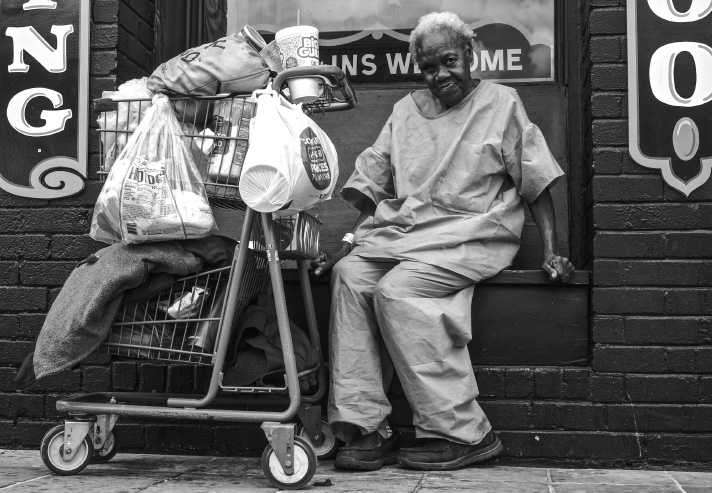 Of all the images I’ve captured of Shirley Erskin, this photo from May 5, 2019, especially lingers in my mind. On this day, still wearing her patient clothing and ID wristband from a recent hospital stay, Shirley confidently held court on Sixth Street as she interacted with passersby.

This image is classic Shirley: a beloved member of the downtown Austin homeless community who underwent open-heart surgery a few years ago, suffers from high blood pressure, and has insisted — until the 2020 coronavirus pandemic — on living on the streets, where she’s a highly visible figure pushing a grocery basket filled with her belongings.

Shirley and her longtime companion, Michael “Cowboy” Alexander, were living at the corner of Seventh and Red River streets in early 2020. They became separated from each other during the onset of the virus outbreak, with each going on to face major challenges.

Because of her poor health conditions, Shirley was temporarily housed in nursing homes and twice was hospitalized, including after suffering a heart attack. Cowboy, who sustained a broken jaw when he was attacked from behind on the streets, left downtown and wound up living near Manor, east of Austin.

With the assistance of social workers, and a lot of luck, Shirley and Cowboy were reunited and are now living in one of the protective lodges — repurposed hotels — that were established by the City of Austin as interim medical sites for those considered high risk during COVID-19.

To see more of Wheeler’s works, visit her website.