Talking Smack: From the Editors

Ceausescu’s Reign, Study of a Dictator

Since I am a child of the fifties with European parents (and at one point a Czech husband) I was always aware of what was going on in Romania during Ceausescu’s reign, which went from 1965-1989. His name came up a lot in our household, Ceausescu the monster and dictator. 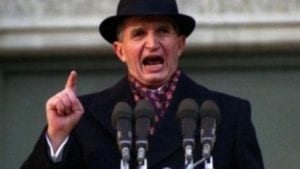 Anyone can look him up on Wikipedia, the ultra repressive Stalinist leader who totally suppressed the media, rationed food, water, oil, heat, electricity, medicine among the masses to the point where many suffered from illness, cold and starvation, who set his secret police, the Securitate, loose on the population to spy and eavesdrop on even the most innocent, who screwed the country by mismanaging the economy and sending it deeply into debt. For me, writing about him and his relationship with Maria Danciu’s family in A Secret Grave, the most interesting part of his regime centered around his cult of personality. The son of a poor peasant family, Ceausescu wanted to make himself appear very big, literally as well as figuratively. Propaganda posters of him abounded all over the country. He was known as the Conducator (“the leader”) while his wife, Elena, was known as “Mother of the Nation.” 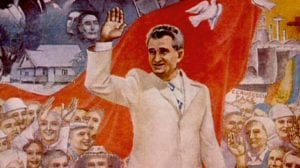 Rumania: Nicolae Ceausescu with his people

Because he was only 5’4”, very tiny, photographers were required to make him appear larger than he actually was in all representations of him. He and Elena were to be depicted as eternally young — the only photos the press could use were of the couple in their forties. Elena with her big nose and ugly features was never to be photographed in profile. She could not abide pretty women anywhere near her. The same, no doubt, went for educated women as Elena, who obtained a false PhD in chemistry after her rise to power as First Lady, had not in reality gone beyond elementary school and was barely literate. (Elena dropped out of school at fourteen, after failing all subjects except singing, sewing and gymnastics.) 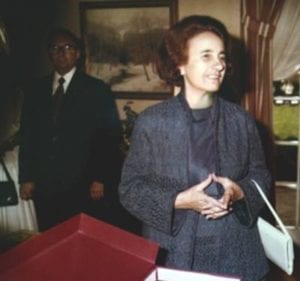 A few other things about the Ceausescus:

Nepotism was rampant. To maintain power, Nicolae filled the government with both his and Elena’s many relatives. One of his chief goals was to make Romania a world power, and to achieve this he instilled harsh anti-abortion laws, believing that “countries with rising populations were rising powers.”* For the same reason divorce was made difficult, and women who had five or more children were practically considered saints. However, the plan backfired and as the population began to boom in the early 70s, large numbers of unwanted and/or unaffordable children were sent to orphanages. Perhaps because of his small stature, Ceausescu had a love of huge buildings and built massive structures such as the People’s House in Bucharest. Upwards of 100,000 workers toiled at the site, which was incomplete at Ceausescu’s death, and which today costs a fortune to run (over six million dollars a year just for heating and electricity) and remains 70% empty.

I will not go into the details of the 1989 revolution that led to Nicolae and Elena’s cursory trial and execution on Christmas day of that year. Only to say that they insisted on being shot together rather than separately, which was emblematic of their life: the couple were rarely seen separately in public. Footage of the execution is included here. 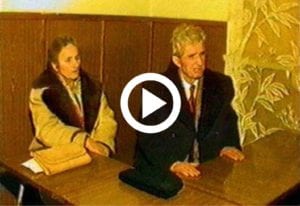 Footage of the Ceausescu’s execution

* Crampton, Richard Eastern Europe In the Twentieth Century — And After, London: Routledge, 1997 page 355