Coronavirus: Trump Plays Doctor with His Own Version of the Truth

From the Editors 7 months ago

Coronavirus: Trump’s Version of the Truth

We all know that Trump’s version of the truth is not based in reality, it’s based on what makes him look better to his cult followers. When it comes to the coronavirus, his words have significant consequences—life or death for American citizens.

Trump began his response to COVID-19 by calling it a hoax. Remember that the Russia scandal was a hoax? (It wasn’t.) Or that the Ukraine scandal was a hoax? (It wasn’t.) And how about the numerous females accusing him of sexual assault being part of a hoax? (They aren’t.) And now we have this public health emergency in which Trump has accused Democrats of “politicizing” the issue. We’re not exactly sure which part of the coronavirus he thinks is a hoax, but some believe he is referring to the viral outbreak itself. He insists that he’s referring to the public response that his administration has failed to adequately get in front of this thing. Well, they have, haven’t they?

Last weekend the Washington Post revealed a senior administration official as saying, “It’s complete chaos. Everyone is just trying to get a handle on what the [expletive] is going on.” It doesn’t help that the president and his cronies wrecked the White House National Security Council’s global health security unit which addressed global pandemics. And it certainly doesn’t aid the American people that our president is completely ignorant about how vaccines work. 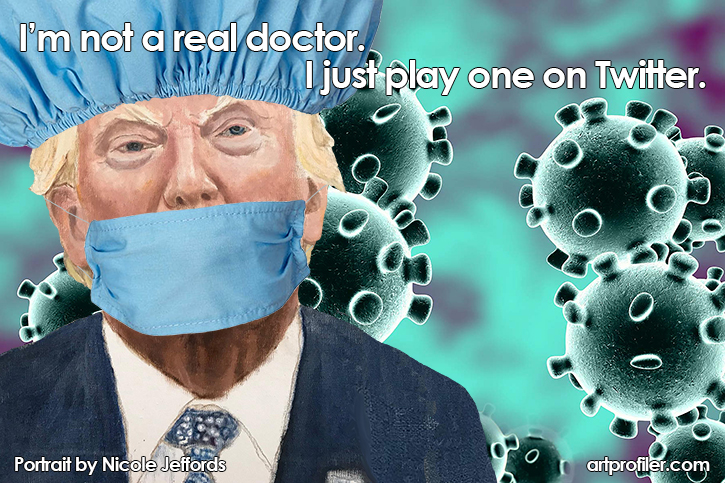 At a coronavirus meeting with pharmaceutical executives earlier this week, Trump was pushing to get a COVID-19 vaccine ready before the November election, no doubt in an effort to help stabilize his beloved Wall Street so he’ll have the “strong economy” to boast about at his campaign rallies (that being the singular item keeping him afloat in the White House). But the World Health Organization (the WHO) has already repeatedly stated that it will take up to 18 months to develop a vaccine, which is actually a much shorter period than the typical two-to-five-year time frame. “I mean, I like the sound of a couple months better, if I must be honest,” Trump said, his ignorance on full display for the world to see. “So you have a medicine that’s already involved with the coronavirus, and now you have to see if it’s specifically for this. You can know that tomorrow, can’t you?” Guess he doesn’t understand the importance of clinical trials. Trump then asked if we could just use a flu vaccine to combat “corona.” The answer was, of course, no. A few hours later at a political rally in Charlotte, the president told his cult that the pharmaceutical companies “are going to have vaccines I think relatively soon.” He also lied about flu statistics to the same crowd telling them that one year, deaths from the flu reached 100,000 people. The CDC states that there have not been more than 51,000 flu-related deaths in the US in the last ten years.

Then, on Hannity’s FOX News program on Wednesday night, Trump completely contradicted public health experts on the coronavirus’ death rate and contagion. He accused the WHO of doling out inaccurate facts about the outbreak and suggested that those who have symptoms could be safe going to work. The WHO has stated that the death rate is 3.4%. Trump speculated, “Well, I think the 3.4 percent is really a false number. Now, and this is just my hunch, and — but based on a lot of conversations with a lot of people that do this. Because a lot people will have this and it’s very mild. They’ll get better very rapidly. They don’t even see a doctor. They don’t even call a doctor…I think the number, personally, I would say the number is way under 1 percent.”

At the time of this publication there are reportedly over 245 cases of coronavirus in the US with many more being tested. 15 people have died so far.

The administration conceded on Thursday that “we don’t have enough tests today to meet what we anticipated will be the demand going forward.” The administration’s pathetic handling of the coronavirus doesn’t sound like a hoax to me.