Every dance show in an alternative space outdoors is unique. The 2019 Dance Nature|Nature Dance show in Pease Park was beautifully unique. The weather gave us one of those perfect days between storm fronts when the sun, wind, and temperature stood in perfect balance all day. Clouds seemed banished from the sky. It was a day quivering in aspic; a snow globe of perfection; twenty-four hours one could only hope could be trapped in amber. It was Camelot in Austin. 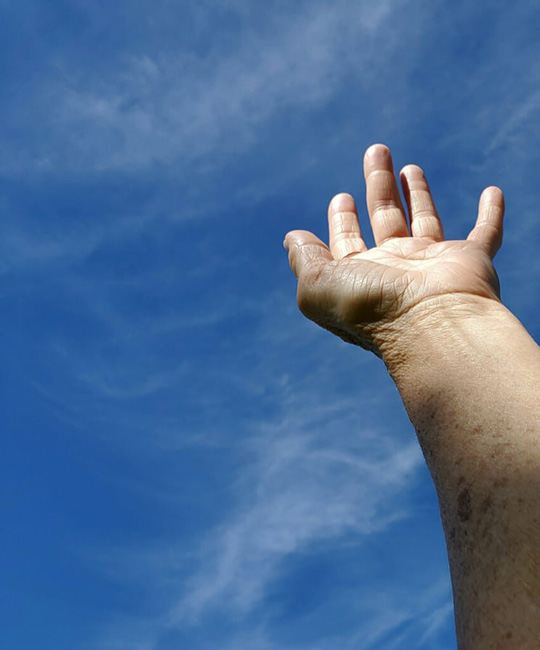 The leaves were a mix of greens, russets, and yellows on the trees, on the ground and blowing in the air. The walk-through audience assembled on the park sidewalks for the caterpillar dance of Annelize Machado and her four-year-old daughter. They replicated the story of metamorphosis from inch-worm caterpillars to butterflies with gossamer wings, Ms. Machado whispering blocking instructions the whole time. The mother-daughter piece had amazing beauty. The audience moved on. 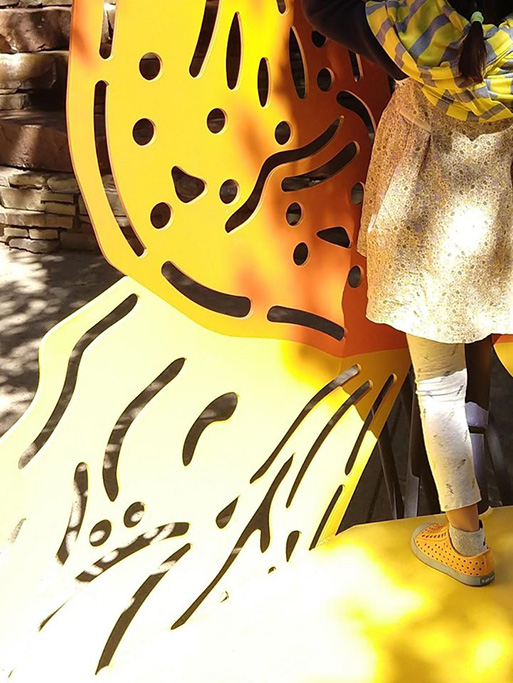 Karin Carlson has been producing Dance Nature/Nature Dance for eight nonconsecutive years. She invites currently working choreographers and dancers to create and perform short dances at points along a walking trail in a park or greenbelt chosen months in advance. The only requirement is that each dance be inspired by the space chosen for it. That is the relatively simple scenario of this dance series.

Carlson herself and I performed a brief introductory dialog with movement to adapt the context of the assembled viewers and passing riders and runners. We asked questions: why dance in nature? What do you see here that grabs your attention? Then we all moved on.

Katherine Hodges led a trio of women in flowing evening gowns in an equally flowing dance in the rocky channel of Shoal Creek. The flowing water and flowing movement in a solid rocky frame produced marvelous peaceful imagery. Kate Cleary performed an overtly meditative solo in the creek bed. She moved in an obviously deep meditative state into the creek, stepping through shallows and over driftwood, pausing on the limestone bedrock of the creek bed. She addressed the solid earth energy beneath her, the incredible vault of the sky above her, the sparkling water dancing around her, and the cool sensual air blowing around her and the audience. She finished lying supine on the bedrock. 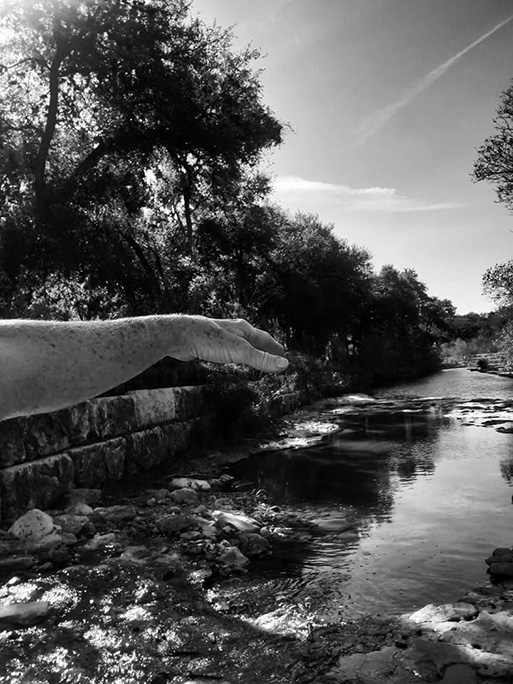 Alexa Capareda changed the pace by telling stories out of Phillippine folklore while she warmed up for the dance. The monkey and the turtle came alive, and we understood the origin of the pineapple. She then mounted the low, spreading live oak, the one overarching the bike trail that riders have to duck under and children love to climb, and she danced her ballet-inflected dance along its branches. Her shapes echoed and harmonized with the sweep and curl of the branches of the tree. The dance was amazingly satisfying, and she didn’t forget the miming monkey-play or the stately turtle images. 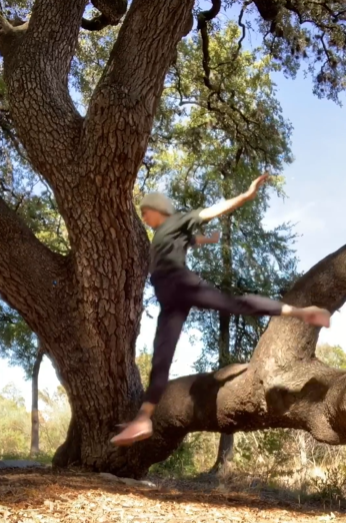 Leesah Liquidsteel danced around the edges of a basin that looked oddly like an explosion crater. The dance was a definite change of pace, taking us to the destruction of the earth. Mario (I only have his first name) sat high in a juniper tree and recited his longish Spanish poem as accompaniment to Liquidsteel’s movements around the rim of the crater. Mario is an excellent reciter of poetry, in any language. The poem is about the self in a time of loss and disappearance, when nature desiccates and takes us to the end of things. The spare, the austere, all such qualities came through to us, even to those with less than full Spanish proficiency. Liquidsteel was costumed in yellow plastic, an orange neckerchief standing in for a facemask, goggles, and a hood. The strong image was of a radiation suit. An abstract element in the performance space was a floating red balloon in the middle of the crater. Liquidsteel’s movements were the flexible, expressive movements she employs with great skill in her independent choreography work and with the Kathy Dunn Hamrick Dance Company and with Blue Lapis Light Dance Company, which calls on her to swing in harnesses from skyscrapers. Here, Liquidsteel flexed and twisted in eloquent movement to the red balloon and then, holding a sleek, treelike shape, and after Mario’s last line—in estas días—she released the balloon. And, how does one choreograph this? The balloon drifted away to the north diagonally upward in line with Liquidsteel’s arms, slowly, as though she were launching it or pushing it away. The performance was over, but the audience stayed, collectively willing the balloon, as something precious, perhaps the life of the earth itself, to come back. It drifted away over a horizon of trees.

The final performance was by Annelize Machado in a trio of East Indian dancers. They wore various yellow and red costumes, variety in cut and unity in color. The dance employed many East Indian phrases and gestures, choreographed to shift back and forth between unison movements and breakout individual phrases. The piece was a sampler of contemporary Indian dance built on historical traditions.

The 2019 edition of Dance Nature|Nature Dance was a huge success, with the crowd of fifty or more, plus passersby, lingering to discuss the rich imagery of the show, renew old acquaintances and revel in the sunlight. Carlson produces it annually, usually in November. The show is not to be missed. 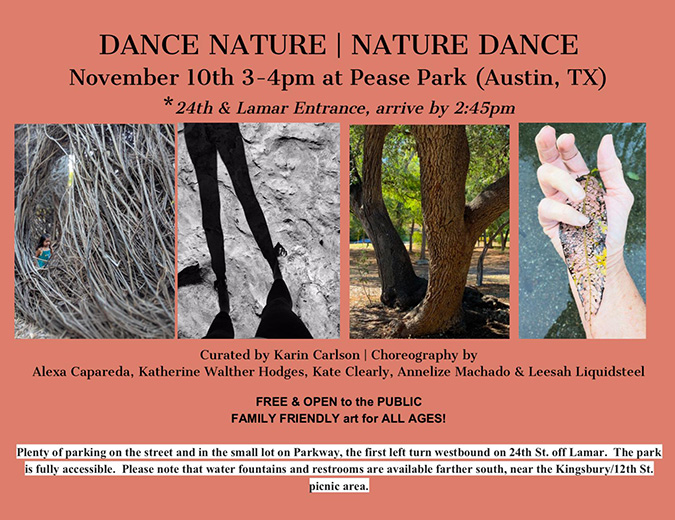