Dance on Film, the film festival associated with Austin Dance Festival, ran Friday night, November 6, 2020, at Rocket Cinema, the outdoor theatre at Pioneer Farms in Northeast Austin. The event was clearly a defiant artistic response to the Covid pandemic, an adaptation to the viral plague and the social changes it has forced on Austin, perhaps for the long term. The outdoor presentation with social distancing and all other protocols in place proceeded smoothly and safely. Dance on Film was a regular component of the Austin Dance Festival, sponsored by the Kathy Dunn Hamrick Dance Company. The 2020 edition of the larger festival was canceled due to the pandemic. The printed show programs given out Friday night were dated March 29 to April 5, 2020. Dance on Film was the only segment of the 2020 festival to be realized.

Dance on Film showed treasures of the dance arts, more precious now than ever before. The concept of the film component is to show videos produced as dances, selected by a panel of two. The seventeen choices for this year’s edition came from as far away as Japan, Russia, Belgium, Portugal, the United Kingdom and Canada. Eleven pieces originated in the United States. Three pieces were documentaries, two of which were profile pieces of a choreographer and a dancer, “Miccolis” and “The Dreamer,” respectively. The third documentary, “Dance/Parkinsons,” showcased a company that leads seniors with Parkinsons as a primary form of their therapy. The results, shown in rehearsal videos, were spectacular, with performers making sure, smooth moves in rehearsed exercises, including, apparently, square dances. The strong contrasts in movements and bodies with the other professional movers on video were inspirational and joyous. “Dance/Parkinsons” was an excellent choice for Dance on Film. 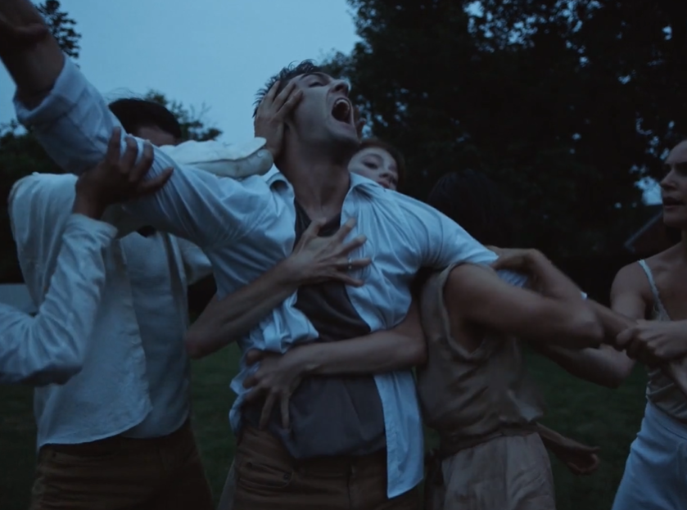 Many of the selections took advantage of high production values to tell or suggest narrative stories in dance. These comprised the pieces with the highest artistic quality in the show. “The Man Who Traveled Nowhere in Time” was a ghost story taking place in a large house in the country, full of generations of characters, and emotionality expressed in faces, movements, situations, spoken text, and flashes of nudity. It was an excellent movie for all dance aficionados, and it led the show. “The Stop,” from Russia, was definitely a Russian film, with plot twists and virtuoso filming through fogged glass and rain and the application of symbolic elements (shoes discarded on pavement, flowers, and a firearm in the glove compartment—a cameo comment on Chekhov). The dance was a tango with balletic extensions. The end was unexpectedly loving and also unexpectedly tear jerking. So beautiful.

“About Face” won a social consciousness award from the festival, and it was about Black fathers raising sons in poverty-stricken neighborhoods. Texts described the faces of sons at three years, six years, and sixteen years, with a progression through the endless grinding tragedies of the ghetto. The father is the primary dancer of the piece, eventually applying white painted lines to his face in vaguely tribal patterns—more about face–as he dances through cinema verité scenes of street life. The backgrounds looked like Philadelphia, but they could be anywhere. Production values were seamless in their excellence. 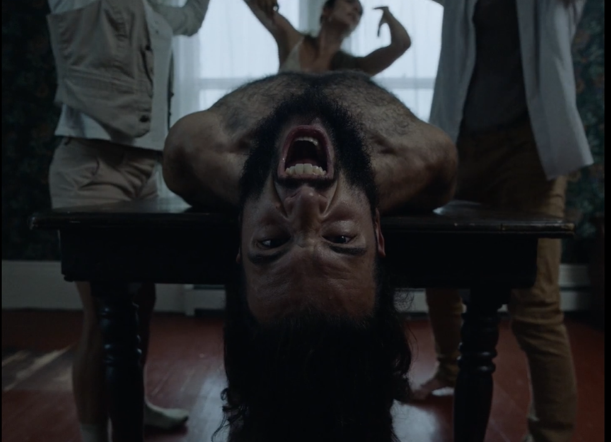 “Making Men” took pride of place as the last piece in the show, ending it on a marvelous high point. A lone man, apparently a writer, reflects on his life and all men coming into their own. The text and some of the imagery expressed gay values and symbols. His fantasy life was expressed in the dance, four masterful male performers dancing in a variety of outdoor environments. The dancers, always stripped to the waist, moved with high athleticism in various combinations and choreographic styles. These dancers could do anything, from chaotic movements in a forest at night to the final long sequence in a rocky desert where they performed lifts, inversions, linked movements in the group, and perfectly timed unison phrases. At the end, they dispersed and walked away confidently through the deserts of their lives. The writer was there, calmly facing the camera. The environments had a look of Africa, but this was not confirmed by any end credits I could read as they sped by on screen. The production originated in Belgium. A minor note: after the admirably long takes of the dances, the bare-chested dancers did not take heavy breaths or appear winded. Superb athleticism.

“Half Light” started with female dancers in long gossamer gowns emerging from the giant trees of a California forest to dance in a clearing—fairies—dancing with long extensions enhanced by their long, floor-length gowns. An esthetic looking artist wandering through the forest drawing only tree branches and brush was captured by the fairies. The capture took place in a separate blackened set, where the fairies, now clad in black vinyl, took on a demonic aspect. They took their prize back to the forest in their gossamer gowns where the captive danced with them in a unique instrument of confinement, one worthy of science fiction. The piece as a whole was an imaginative transit of the bizarre which didn’t abandon its core dance values. An end credit heart-warming to all visual artists was a credit given to the artist who actually drew the tree and brush pencil drawings. 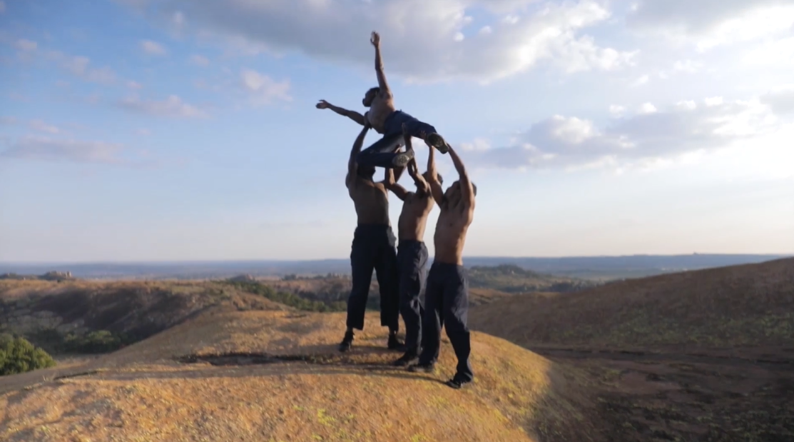 In any wide-ranging festival presentation, the quality of the offerings varies widely, and, frankly, those with insufficiencies look worse by comparison. None of the pieces in this festival fail utterly as dance, and all are worthy. This includes those that cannot be mentioned here due to the limitations of time and space. Some comments are offered, however, from the outside perspective in a spirit of encouragement. “Ruba Reducks” had a strong absurdist esthetic of great appeal to Austin audiences, and the piece was performed largely by three highly skilled female dancers. The piece suffered from high speed editing perhaps intended to give the video a frenetic pace. Some of the takes were less than a second, and these short takes did not allow full appreciation of the imagery. This left parts or all of the audience mystified by the piece.

“The Yellow Room” was a romantic love duet usually appealing to all. With love duets, however, most of the people seeing the duet have seen hundreds of love duets, and many in the Austin audience have performed in them. Before challenging the form, a choreographer should have an idea of something new, some new pathway through the dance. I saw no movement in “The Yellow Room” I had not seen many times before. Adding to the obstacles to overcome in the dance was the strong, dramatic vertical lighting, which mostly illuminated long, tangled, sweaty hair, sweatier shoulders, and ropy muscles on arms and backs. Closeups from the side lacked sufficient light. Here, lighting design did not support the choreographic design. 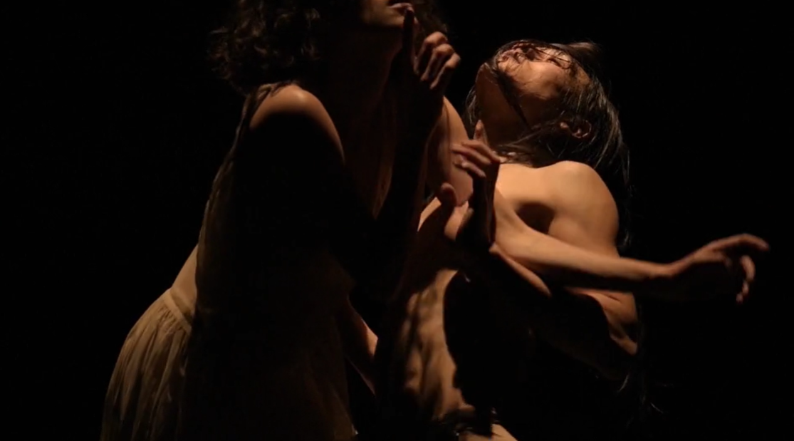 “Secret Love” was a solo by a gym-body shirtless male in a small square room with minimal furniture. The dance was one of emotions expressed in the isolated room, for a love for whom he could not express himself directly. Much of the movement and facial expressions may have been improvisational, again not much new in it. The dance esthetic of ripped males stripped to the waist is becoming cliché, an aspect mocked heavily by the clever and funny “Don’t Miss It” elsewhere on the program.

Dance on Film surveys the best of worldwide contemporary dance in 2020, a year of turning points and first steps on new paths to excellence. Any potential re-showings of Dance on Film 2020 are not to be missed. These works of fine arts dance wedded with film increasingly join with other fields of art, including commercial performance, and so invite comparison. Commercial dance on cable media outlets are creeping up from behind on the fine arts, and their hot media increasingly intrude on our perceptions, thoughts, and participation in fine arts forms. And the fine arts can learn much from them. One example is worthy of note. The popstar Rihanna, who, in my opinion, is the new Lady Gaga, currently shows her production Savage X Fenty on several media platforms.  The performances at their core are dance, born of hip-hop but not limited to it. Phrases and progressions often reflect contemporary dance esthetics, many as performed in Dance on Film. Rihanna borrows from everywhere and pushes the envelope, too, in moving into design fields. She emphasizes costumes on her many performers and offers the costume designs commercially in fashion lines. Income supports her music and performance efforts. Fine arts can learn from Rihanna’s approaches without “selling out.” 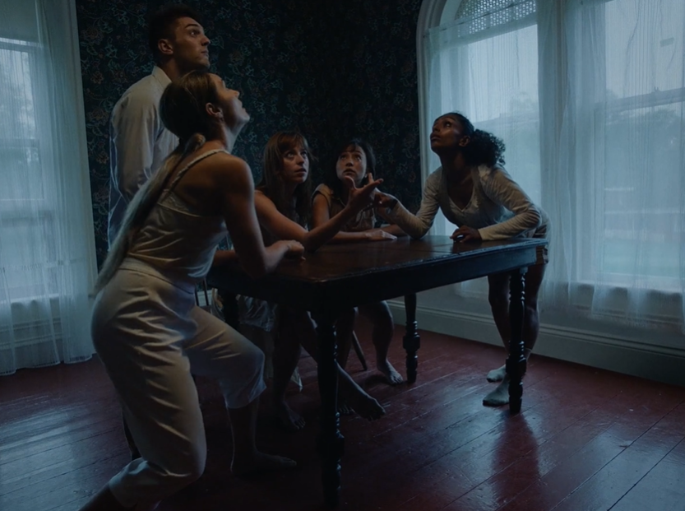 The producers and selection panel for Dance on Film were Ilana Wolanow and Lisa Kobdish, and their creative work is to be credited fully. Future plans and scheduling of Dance on Film may be followed at AustinDanceFestival.com. Who knows, Rihanna may be watching and taking notes.

We highly recommend watching the Dance on Film promotional video!