Disgusted and Chagrined in Tampa

I’m a fifty-five year old man with three children, two boys and a girl. The girl is twenty-one with one year left of college. It has been quite a struggle to pay her tuition, and she’s taken out some student loans. During her time in college she’s earned straight As. Imagine my shock when she announced to her mother and me that she’s dropping out of school. Not only dropping out, but getting married to a family friend who just turned fifty and has known my daughter off and on since she was little. Apparently they’ve been secretly going out for the past year, not telling us, acting like everything was normal. This is disgusting and I don’t know what to do. My wife and I have talked to our daughter to no avail. (I won’t talk to my friend anymore. The idea of him with my daughter makes me sick.)  I know if we don’t accept this marriage, we risk not having much of a relationship with our child. On the other hand I feel betrayed and can’t stomach being around the two of them. Please advise.

— Disgusted and Chagrined in Tampa 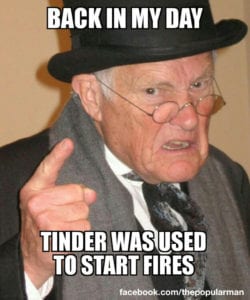 If you can’t stomach being around the two of them, then don’t. Your daughter is an adult so there’s nothing you can do. Not a damn thing you can do about your friend either. Sounds like he romanced your daughter in a pretty creepy way behind your back. Your best revenge is silence. If your daughter needs you, she knows where to find you. Otherwise go on with your lives and enjoy your other children. My prediction is she’ll be back and maybe she’ll have learned something. 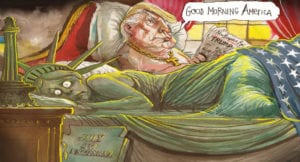 REACTIONS TO DIVIDED IN PHILLY

Your husband is lord of your house and you should obey his word at all times. You will be much happier if you follow this advice, especially regarding Donald Trump whose goal is to make America Great Again. Donald Trump is the best president we’ve ever had. He wants to bring back jobs, get rid of illegals, keep us safe. You should listen to your husband.

Right on, girlfriend! My advice is to leave that sucker and listen to your heart. Trump is unstable, unbalanced, and anyone who voted for him is an idiot. We have a great country that the Orange Presence in the White House pulls further and further downhill everyday with his stupid tweets and racist notions. I say leave your husband and get out there and fight!