My husband and I have a significant problem having to do with our dogs. We each brought a dog into the marriage. (We’ve been married three years.) Mine is a Schnauzer named Franny whom I’ve had since she was a puppy. My husband has a Siberian Husky named Wolf whom he adopted as a rescue a few years before he met me. I’ve never liked Wolf, a one-man dog who’s hostile to everyone but my husband, actually growls and gives the stink eye. He’s never actually done anything to me, but I don’t feel safe around him and I insist that Tom lock him in the crate or in another room when he’s not home. Franny by comparison is the sweetest thing, even though she has some bad habits, like getting into the garbage or sleeping on the couch when she’s not supposed to. The point is Tom and I argue about the dogs constantly. Tom loves his dog and I love mine and we just can’t seem to come to terms on the subject. I recently became pregnant and don’t think the tension between the dogs (and between us) will be healthy for a child. I worry about how a difficult dog like Wolf is likely to behave around an infant, and when I bring this up to Tom, he gets really angry at me. He will not entertain the idea of giving his dog up. Can you please tell me how to handle this situation? It’s getting harder and harder on me. 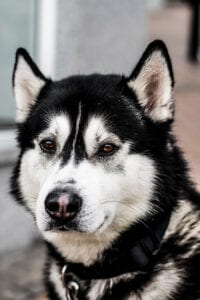 Well, that certainly is a quandary. Of course, you both love your respective dogs — they’ve been like your children up to now. But you’re about to have a baby. If Wolf already growls at people, he’s not going to be reliable around an infant. Nor, from my experience, is your Schnauzer, Franny. Schnauzers are notorious for feeling displaced and getting snappish when a baby (to them an interloper) arrives. My advice: prepare to get rid of both dogs. Start now so you can find good homes. If you take a wait-and-see approach the stress level will rise even higher and could end in tragedy. I would also suggest a few sessions with a therapist to sort out your differences. 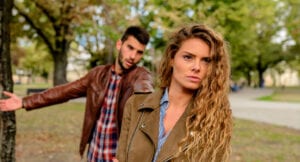 My husband used to be that way and it nearly drove me crazy. What I finally did was tell him “No one knows what’s best for me but me” each time it happened and cut him off the minute he started with that BS again. If I had to, I’d leave the room. If we were in the car, I’d say JUST STOP NOW and plug in my earphones. Once he knew I meant it, and that sulking or bickering wouldn’t help, he dropped the habit and things were way better between us. Good luck.

I used to worry too much about my wife and grown children. I knew it was annoying, but I couldn’t help it; it made me feel secure. My wife finally convinced me to go into therapy where l learned how destructive (and controlling) it was to project my anxieties onto other people. This was an excellent life lesson. All the best to you,