In Bob Woodward’s new book, Rage, he reports that Trump knew coronavirus was ‘deadly’ at the same time the president was intentionally misleading Americans. Trump’s national security adviser (Robert C. O’Brien) warned Trump in January that Covid would be the biggest national security threat Trump would face during his presidency and that the health emergency was just as bad as the 1918 flu pandemic which killed an estimated 50 million people around the world.

“This is deadly stuff,” Trump told Woodward (there’s nine hours of taped interviews to confirm this). So why, then, did we Americans hear the exact opposite from Trump for months? (“It’ll just disappear.” “It’s just like the flu.” “We have it under control.”) Because he deliberately minimized the danger of Covid for his own political self-interest. Trump thought that by making it seem as if the virus wasn’t a severe health crisis, he would coast through his re-election campaign with a strong economy. 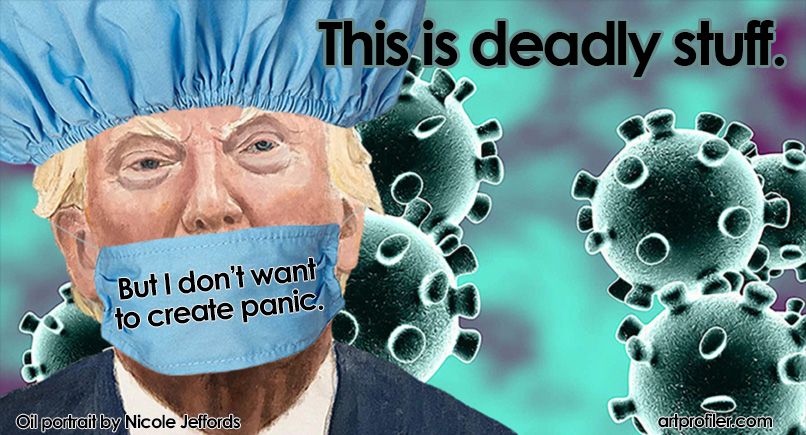 “I don’t want to create a panic,” he told Woodward. But we all know creating a panic is exactly what Trump likes to do. This poor excuse of a president thrives on chaos and lies:

SEND IN THE TROOPS TO TEAR GAS FRIENDLY PROTESTERS! SHOOT “LESS LETHAL” BULLETS AT THEM! DON’T IDENTIFY YOURSELVES. ARREST AMERICAN CITIZENS AND TAKE THEM TO UNDISCLOSED LOCATIONS!

Trump’s blasé approach to dealing with the virus has resulted in the death of nearly 200,000 Americans (and counting). There’s no doubt that his careless attitude about health safety (refusing to wear a mask, packed rallies, a Republican National Convention crammed onto the White House lawn) has contributed to the loss of life.

But did we ever really expect Trump to put anyone before himself? He certainly wouldn’t do that for you or for me, and clearly he won’t do it for the America he claims to love. But don’t panic.