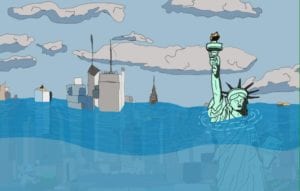 Worried about the environment? Climate change? You should be.

On Monday, Scott Pruitt, head of the Environmental Protection Agency, announced that the Trump administration will move to repeal Obama’s plan to restrict the emission of greenhouse gases.  The announcement to withdraw from the Clean Power Plan was made at a political event attended by Kentucky coal miners.

Trump, a widely known climate change denier, made repealing regulations a centerpiece of his campaign and issued an executive order in March to block the Clean Power Plan, calling on the EPA to review the plan and determine whether it overstepped its authority. He has overturned numerous environmental policies (Dakota Access and Keystone pipelines, for example) and has lifted a freeze on new coal leases on public lands. He has also ended a mandate for federal agencies to include greenhouse gas emissions in environmental impact statements. He withdrew from the Paris climate accords with the excuse that they place “draconian financial and economic burdens on the U.S.” Welcome to your future, children of America.

A former administrator of the EPA, Gina McCarthy, told NPR in August that the Trump administration is “not just trying to roll back rules, they’re really trying to defund and dismantle the agency itself… But wouldn’t it be a lot better if you didn’t pretend like coal was coming back…”

A new, 43-page document called “Repeal of Carbon Pollution Emission Guidelines for Stationary Sources” (or power plants) states that the EPA will appeal for public input on how to cut emissions. Under Obama, the Clean Power Plan sought to reduce carbon emissions in the United States from power plants for the first time. Power plants account for nearly 40 percent of carbon emissions, and “they were allowed to dump unlimited amounts of carbon pollution into the atmosphere. No rules were in effect that limited the emissions of carbon dioxide, the primary driver of global warming.” (Union of Concerned Scientists)

The announcement to repeal the Clean Power Act comes immediately after a string off massive and catastrophic hurricanes. Harvey, Irma and Maria hit the southern coasts of the US as well as the US territories of Puerto Rico and the US Virgin Islands. But these cyclones have caused devastation all over the world. And their main ingredient is warm water. The National Climate Assessment says, “evidence for a change in climate abounds from the top of the atmosphere to the depths of the ocean.”

How will Trump feel when his hometown of New York is under water?

For more information about artist James Blanchard, visit his portfolio.