Enemies of the People

From the Editors 12 months ago

These are the real enemies of the people, folks. 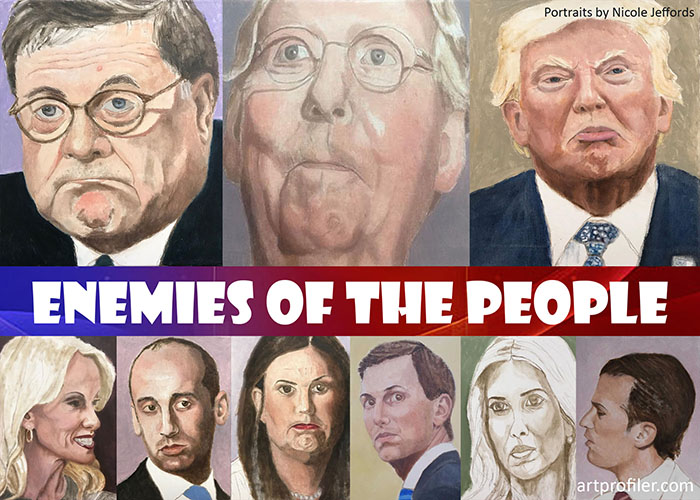 I mean, we have the head honchos who really have made a mess of things. I’m talking about Barr, Mitch and Trump, of course. But there are more.

Kellyanne Conway has made it her life’s purpose to be a professional liar on TV. Alternative facts, anyone? Stephen Miller is the anti-Christ, what with his racist and inhumane immigration policies. The Huck Grump is on her way out the door, thank god, presumably to become Arkansas’ next governor. Sorry, Arkansas. Kushner should never have been granted a security clearance and is as shady as his former inmate father. Saudi prince friendship? Ivanka pretends to be all butterflies and unicorns, but accounts from those who work with her speak to something far uglier. And Don Jr. can’t seem to tell Congress the truth to save his life. “If it’s what you say, I love it.”

But the bigger issues right now are the president, the attorney general and the Senate majority leader. We have a president who just openly admitted on TV that he would accept help in his reelection from a foreign government. (Are you listening Russia?) The attorney general prefers to investigate the investigators and act as Trump’s corrupt personal attorney rather than the highest justice department official of the land. And Mitch is sitting on 100+ bills that could make a better life for millions of Americans, including the one that would help stop interference in the 2020 presidential election.

Perhaps Pelosi and Schumer’s joint statement says is best: “There is a dark connection in Washington between Senator McConnell, Attorney General Barr and President Trump: each preventing progress for the people, acting as handmaidens to a special interest agenda that is anti-government, anti-science and against meeting the needs of hard-working families.”