Kathy Dunn Hamrick holds pride of place as one of Austin’s premier modern contemporary choreographers. In support of this assertion are nineteen completed seasons of dance productions by her company, Kathy Dunn Hamrick Dance Company (KDHDC). In acknowledgement of her accomplishments, the Austin Critics Table inducted her into the Austin Arts Hall of Fame in 2018. In further recent news, KDHDC won the Critics Table Award for Best Ensemble Dance Performance in 2019 for 2018’s Be Still, My Heart.

Kathy Dunn Hamrick shows have attained a high plateau of excellence for at least the last five years, perhaps longer. Her work ethic explains part of it. She puts in the necessary time as would anyone in a career job. She signs skilled fine arts dancers to contracts and then trains them to heighten their skills further. More than that, she listens to the dancers and collaborates with them as colleague artists in building evening-length shows. After that, the dancers are free to express their kinetic art in full. The results are astounding. 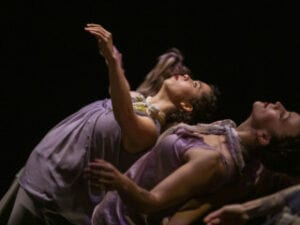 Everything! Everything! Everything! is a kind of clever retrospective of her shows going back about ten years. In her preshow talks, Kathy Dunn Hamrick assures us that the choreography is new except for limited referential phrasing and vocalizations. References to previous shows are largely aspects of the set, lighting design, music and costumes. She mentioned Mountains, Ships, and Lives; Glacier; The Undoing of Nonette; and the more recent Parade and Be Still, My Heart.

Powerful, lyrical dancing reminds us all why we attend dance shows. The all-female double duets near the beginning of Everything! Everything! Everything! alerted us to the precise and sinuous Baroque floor patterns to come. Props, chairs, videos, and costume pieces propelled us through many mini-stories reminiscent of those of Pina Bausch and Tanztheatre Wuppertal.

Although composed partly of such backward glances, none of these elements together formed a patchwork quilt of images hearkening back sentimentally to past successes. All the elements cohered, forming a whole performance, true to itself. Recycled bits of material became fresh creativity. As Kathy Dunn Hamrick said in her curtain speech regarding her rehearsal standards: “we don’t move backward, we only move forward.” She gave her dancers a shiny, well-tuned vehicle with which to speed forward.

The company hopped in and took it for a ride. Dancer D. Poet Powell continues to hold his mastery of contemporary movement technique light as a feather. His onstage presence could dominate every show, but he performs with subtlety and understatement unless the dynamics of any passage call for greater power and focus on the performer. Credit for virtuoso performance goes to Powell and Veronica DeWitt for an incredible leap and lift resulting in a sustained high balanced shape, with DeWitt posed sculpturally on Powell’s back and shoulders. The two also shared a joyous duet late in the show, and of course several ensemble interactions throughout the performance.

In the fashion of Powell, Jessica Boone continues to shine within the ensemble, not in front of it. Her execution is flawless, seen not only in her solo work but in several group unison passages, some lengthy, where timing and the details of hands, arms, and feet matched perfectly across the group. Her work shows artistic perfection of the individual and also of group work. Boone is leaving for fine arts graduate work out of state. She will be missed by the company and her admiring audiences. 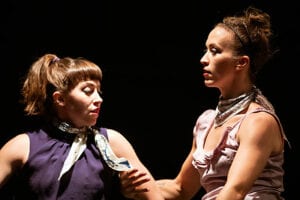 Longstanding company members Lisa Anne Kobdish and Carissa Topham-Fisher drove the pace with high energy, along with the aforementioned Veronica DeWitt. They show great familiarity with the needs and expectations of Kathy Dunn Hamrick’s choreography. Alyson Dolan assisted with the choreography but did not perform; she is expecting motherhood in September. Cara Cook, an athletic and smart contributor, is completing her first season with the company. Clay Moore displayed masterful dancing and acting chops in his first show with KDHDC.

Stephen Pruitt worked well behind the scenes as production designer and the one who resurrected memories of past shows. Anyone who hasn’t attended a Kathy Dunn Hamrick performance is encouraged to mark their calendars for the next show (dates TBA), kicking off what no doubt will be a spectacular 20th season.

Previous Article
Larry Akers & His Band of Artists
Next Article
James Surls: With Out, With In (Art Review)