On Saturday, June 30, a resistance colleague and I attended the Families Belong Together Rally in Austin, Texas. The event was held at the State Capitol, and by all accounts was a calm and peaceful gathering, which is usually the case for political events held in Austin.

The signs protesters carried clearly displayed the anger many are feeling at the Trump administration. I’ve attended many protests and marches since the November 2016 election, starting with the first Women’s March in 2017, and it is safe to say that more and more people are seeing this presidency as a farce and that great contempt for our president and his cronies is growing. People are no longer just sad and horrified, they are enraged. And that force alone is what will propel us to unseat Trump and his Republican Congress.

Unlike the immigration protests that took place in Portland, D.C., Boston and Phoenix, Austin’s rally drew very few counter-protesters. I did, however, run into two men dressed in the familiar gold and black shirts worn by the Proud Boys. I approached them with my sign, which displayed images of Stephen Miller and Jeff Sessions, and asked them what they were doing at the rally. One of them replied, “We’re here to talk to people. We agree with most of what is being said.” But it didn’t take long for the other to jump in about Soros, the alt-right’s age-old argument, claiming that Soros’ speeches make him out to be anti-Semitic. 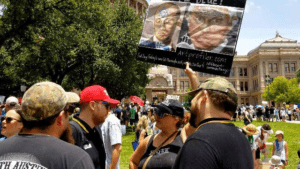 Randi talking with the Proud Boys

The part of the conversation that really surprised me, though, is that they didn’t know who the people were on my sign. One thought Sessions was the Pope, and neither knew who Stephen Miller was. I calmly explained that Miller is Trump’s immigration adviser, the one behind the “Zero Tolerance” policy. The divisive, racist young man who grew up Jewish and whose family is ashamed of his behavior. I found it both heartbreaking and maddening that these people can support Trump and his policies without knowing who the people on his team are, the ones influencing Trump’s decision-making.

I walked away finally understanding what’s happening in our country. One side is approaching today’s political climate with eyes wide open, and they are becoming increasingly enraged. The other is growing in ignorance, and that blindness, that sheep mentality, is perhaps the scariest thing in America today.