For Dr. Ford, A Poem by Jane Barnes: “Cleaning the Floor”

For Dr. Ford: Cleaning the Floor

I can’t do anything for you, dear Dr. Ford

so I get my Swiffer and for the first time

in three months I Swiffer my floor

I sweep a little at first–don’t want

to move around too much dirt–BUT the dirt is there

Meanwhile you, Dr. Ford, are speaking for 51 percent of

women (and many men) and for me

so I became willing to go far back

into my bedroom and clean

underneath a place you suffered terror one day

I clean the whole room

maybe also of nightmares I have sometimes–

thanks to my father–

That’s why I like to be alone, alert to noises

and now the bad suit puppet prosecutor is grilling her

and meanwhile I’m waxing by the door

struggling under the assault

then the prosecutor drones on with a motherly smile

And Dr. Ford speaks about boys

she “went out with”

I take off the filthy Swiffer cloth,

drape it over the lip of my wastebasket

let’s give Kavanaugh a non-alcoholic beverage

does he know his life is getting mopped up

that his floor is black with filth

as if a tsunami has raked over it

it will never come off

And just now a kind-looking man

places his hand gently on her head

her husband I think

her lawyers gently touch her shoulder

a woman friend moves beside her

and I leave the house

go down the block to my therapist

from gratitude and from all our pain

the faces of the violence vivid in front of us

Back at home the TV’s still on

it was so filthy like women with PTSD are today

we go from dirt and lie to truth and gleam

why don’t you know where and when it happened

I may not know the date or the place

but something happened and what I remember– 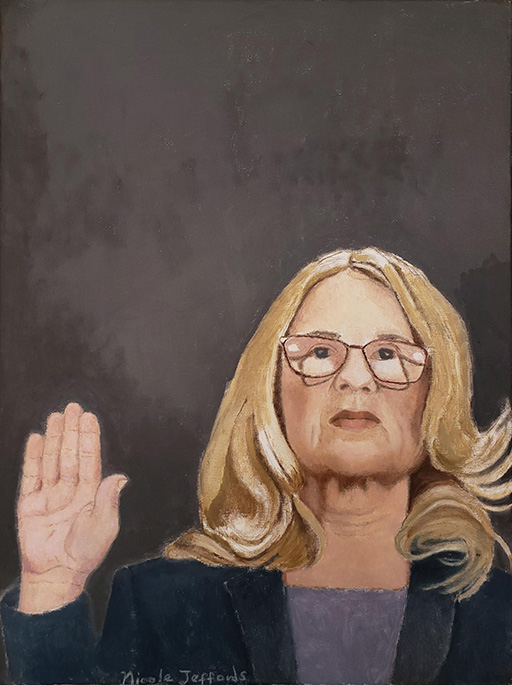 Previous Article
American Love, a Poem by Joshua Kight (VIDEO)
Next Article
Love in a Time of Sickness