Freaked Out Mama in Montclair

Perhaps you can help me. I am the mother of a sixteen-year-old boy and live in a mostly forward thinking town in New Jersey. My husband and I are active in the democratic party and give generously to liberal causes. We have also been active members of our local reform synagogue for many years. Robert, my husband, is a successful orthodontist. I work as an advocate for special needs kids at an educational research firm in Manhattan. That‘s the background. Shortly after Trump’s election last year, I started monitoring my son, Jared’s online activities and discovered he not only frequented alt right sites, but was an enthusiastic follower of Neo-Nazi, Richard Spencer. When I saw some of Jared’s posts I felt as if I’d been suckerpunched. For instance: “Can’t wait till slimy liberal elites are wiped from the face of the earth.” I didn’t bring up my boy to ever think that way (my husband’s grandparents survived the Holocaust). When I look at Jared now, I don’t know who he is or what he thinks. Or how he has become such a bigot (a lot of his posts are racist in nature). He goes to a very liberal high school and outwardly seems normal. My husband and I don’t know how to talk to him for fear of pushing him further in the wrong direction. It is sickening. What to do? 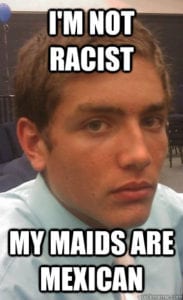 Normally I would applaud a child questioning parental beliefs, but in this case I wonder if you had too many expectations of your son. Was he an only child? Did you lavish him with attention and not give him enough discipline? Most children need something to react against, especially as they become teenagers. I suggest you study up on some similar cases — Stephen Miller and Julia Hahn, both brought up as liberals who now work for Trump are two who come to mind. If it were my son I would be strategic and remove privileges, not as a way of punishment but rather as a way to make him work extremely hard to benefit from the easy life that once was his. If he wants a car, let him buy it himself. Nice pair of sneakers? He’ll have to figure out how to pay for them. College? He’ll have to come up with the funds. Play hardball. I’m sure he’s sick and tired of hearing about the Holocaust, but show him graphic films. If you have a friend he listens to, make sure he spends lots of time with that person. Above all, get him talking. And make him contribute to the household. Kid has to grow up. That means seeing how other people live and developing a moral compass. Sometimes pampering is the worst thing and children heading down the wrong path need to learn what it is to be faced with hardship and difficulty. Please keep in touch, CD Knowles

Knowles, Just to let you know I’m part of a small, select club honed to kill. I wish it were otherwise. I wish I could stop myself.

Readers, I received the above in my email a few days ago. I don’t know who this person is but I happily engaged with him. Here’s what I wrote:

I’m honored that you’ve chosen me to talk to. As an advice-giver it’s my job to be able to experience every human emotion or tendency, including the OCD drive to kill that afflicts people like yourself. I understand being overtaken/entertained by dark thoughts. You will not be able to stop yourself, and if you’re clever you’ll never get caught. If you want to be stopped, the best thing would be to give yourself in. In the meanwhile, I’m happy to hear from you! 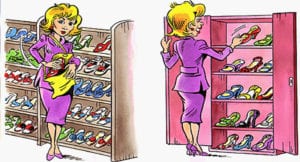 REACTION TO MARRIED TO A KLEPTO

What a weak stupid man you are! I can tell you right now your wife is perfectly well aware that you know what she’s doing and she’ll keep stealing till you man up and say something. Sure, there’s a thrill to getting away with a theft, but there’s guilt and low self esteem as well. Trust me, I was a klepto so I know. And guess what, asswipe, I grew to hate my husband for not having the balls to stop me. In fact, when I finally got caught I blamed my husband more than myself or the store detective. Therapy helped me understand how deeply unhappy and bored I was with my life. But my marriage didn’t survive, so if you love your wife and want to stay with her, go get help before it’s too late.

I had this problem too, very painful, just couldn’t stop myself even though I was quite wealthy. It is one of the highest forms of excitement to flirt with a desired object, stalk it, study it, and then, with great stealth, slip it into the purse. I did this many times in places like Bergdorfs, Saks Fifth Avenue and H&M till finally a store detective confronted me and I had to talk to my husband about it and look really deep at what was wrong. I sincerely hope you help your wife with her tendencies.