“Early the next morning, when the cops were out of the way, I rushed to the campsite. To my horror, the tent and all the supplies were gone.”

Editor’s note: Caitlin’s journal ended abruptly on the evening of Sunday, May 24, the night before George Floyd was murdered. Now it’s three months later, the end of August, and obviously a lot of things have happened in the time that’s elapsed since we started posting Caitlin’s journal entries. It was an editorial decision on our part to let the journal run to completion before jumping in to say what had happened to Caitlin. You can start at “Caitlin’s Story Continued, 1” to catch up. This is the final post of this story.

On Sunday night, just before sunset, I was returning home from a neighborhood stroll with my dog when I saw a white medical examiner’s truck and a bunch of police cruisers swarmed in front of the apartment building at the end of my street. But it wasn’t until I walked into my own backyard to water some plants that I discovered what had happened.

The train track sits about 40 feet behind my property line, on top of a steep hill easily viewable over the back fence. As I turned on the hose, I heard voices and looked up to see half a dozen uniformed police officers walking up and down the tracks. The cops were carrying flashlights and were clearly searching for something. Judging by the medical examiner’s truck I’d seen minutes earlier, they were on the hunt for a body (or body parts).

Someone had been hit by a train! Someone was dead! And I knew immediately, without a doubt, that that someone was Caitlin. All the events of the previous week crowded into my brain, vying for attention. I knew Caitlin wouldn’t have walked in front of the train on her own; she’d been pushed. Who would have done such a heinous thing? The two Asian men? V? Greta Shultz? Suddenly I felt my dinner come up and I leaned over and vomited right into the planter box that holds my homegrown cherry tomatoes and Thai basil.

I ran into the house, rinsed my mouth and grabbed a flashlight. I had to get into the greenbelt as quickly as possible — not by my usual route, too many police vehicles parked in front of the apartment building, but by another secret path that the cops probably didn’t know about.

The entrance to this path was completely overgrown (we’d had a rainy spring), but I didn’t let that stop me. I picked up a fallen tree branch that I could use as a spike and hacked my way through the thorny bramble, keeping the flashlight aimed at the ground for any snakes I might encounter. I had almost reached the creek, only thirty yards or so from where Caitlin’s tent was hidden, when a police officer stepped out from a tunnel beneath the track, momentarily blinding me with his professional grade flashlight. 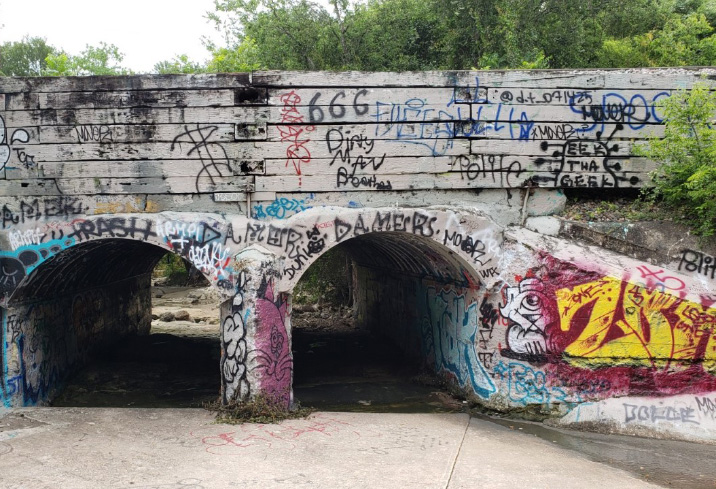 “Ow! Can you please not aim that right in my eyes?!” The cop angled the beam down a bit, but my vision was filled with moving stars.

“You can’t be back here right now, Ma’am,” he said sternly.

“But my friend’s camping back here in the woods! I just want to make sure she’s okay,” I spluttered.

“No one’s allowed back here,” he repeated.

“What happened?” I wailed. “Did someone get hit by a train?”

He nodded in a way that made me want to vomit again. “This whole area’s cordoned off. You’re going to have to leave immediately.”

No use arguing. A heavy weight descended on my shoulders as I hacked my way home through the woods. This was all my fault! I’d stupidly given too much information to V (whom I‘d thought was Caitlin’s friend when she was really an enemy), so consequently I was to blame for her death. At home, I called Nicole to tell her what had happened. “How can you be so sure V did it?” she asked.

“I know it in my gut! When I get these feelings I’m always right!” In the background Lola squawked “Call Fauci! Call Fauci!” and I screamed at her to shut the fuck up.

“I think you need to get some sleep and wait until all the facts are in,” Nicole suggested wisely.

So early the next morning, when the cops were out of the way, I rushed to the campsite. To my horror, the tent and all the supplies were gone. There was no sign that Caitlin had ever been there, other than the dead patch of earth where the tent had been sitting for the last week. As for the key fob, I knew exactly where I’d buried it under the tent, but it was gone too. 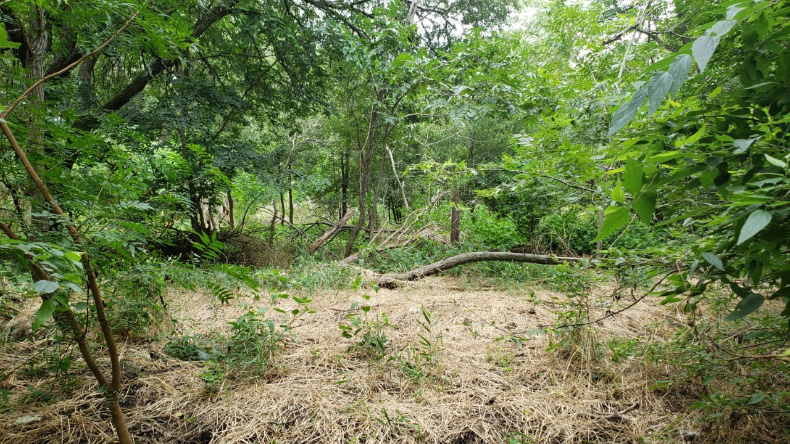 Once I’d calmed down, I called the police and told them the whole bizarre story about Caitlin and her missing husband and the key fob and everything else. The detective assigned to me thought the saga was preposterous — I could tell by his patronizing voice that he didn’t believe a word I said. When I asked him what they’d done with all the camping gear, he told me in no uncertain terms that he couldn’t discuss details of an ongoing investigation. If the camping gear had indeed been picked up, it would remain in an evidence warehouse.

That was probably true, but how would the cops have known to dig for the key fob? That is a question I’m still asking myself, three months later.

And here’s another thing that troubles me. Caitlin was murdered on the evening of Sunday, May 31. But exactly one week later, on the evening of June 7, when I happened to look up at the kitchen TV while cooking dinner, there was a clip of the Black Lives Matter protest that had taken place earlier that day on the Huston-Tillotson campus. A massive crowd of protesters had gathered on a lawn, and as the camera zoomed in for close up shots, I saw something that made me completely forget about the chicken sautéing in the pan.

There, among the throngs of people, standing next to someone holding a large sign that read I CAN’T BREATHE, was a frail, dark-haired woman hidden behind a Covid mask and a black baseball cap. A cap that said “ArtProfiler” in white letters across the front. There are only two people on this planet who own that cap — Nicole and I. And I had lent mine to Caitlin the week before.

WTF?! Was Caitlin still alive? Had she faked her own death? Could that even be possible? I’d assumed the police had found a body, torn to shreds, practically emulsified by the speeding train, but still probably identifiable through dental records. The question was: Was that body Caitlin’s?

I had no idea. And you know what? In a way, sickened as I was at the thought of what might have happened, I didn’t care. I still had the parrot (she was now my son’s problem), but other than that our days returned to normal — or Covid-normal, which meant practically never leaving the house except for walks or trips to the grocery store. Our time was filled with Zoom hangouts, art projects, movies, gardening. I even managed to keep my job with the client whose home had been ransacked because of Caitlin, though it took a lot of explanation and money paid from my own pocket for additional housekeeping to clean up the mess. I had sincerely thought that worries about Caitlin would recede. But dead or alive, she remains a ghost that haunts my dreams nearly every night.

Our advice columnist, CD Knowles (a pseudonym), a person we’d never met, stopped sending us her weekly column in February. After six weeks of no communication, we began a search for her. Along the way, we discovered that Knowles was Caitlin Wang. We finally met her in person in late May and she asked us to publish her journal for reasons detailed in the story. But then she disappeared (she was presumably murdered by someone who pushed her in front of a train), so we recapped the events in ‘Caitlin’s Story Continued.’ You can start at the beginning with our series of videos that detail our search for Caitlin. At the bottom of each post, click “Next Article” to move forward in the story. The second section of the story, Caitlin’s journal, begins here. ‘Caitlin’s Story Continued’ starts when Caitlin stopped writing in her journal and when we hid her in the greenbelt behind my house (she was there for less than a week) – that section begins here.