“Greta has been involved in lawsuits for reporting fake data in her research. And get this: Henry said that at one point she’d been working with that Plandemic woman, Judy something or other.”

Editor’s note: Caitlin’s journal ended abruptly on the evening of Sunday, May 24, the night before George Floyd was murdered. Now it’s three months later, nearly the end of August, and obviously a lot of things have happened in the time that’s elapsed since we started posting Caitlin’s journal entries. It was an editorial decision on our part to let the journal run to completion before jumping in to say what had happened to Caitlin. You can start at “Caitlin’s Story Continued, 1” to catch up.

I couldn’t sleep. The sight of V creeping into my backyard a few hours earlier had flooded my system with adrenaline. I felt a mounting dread that V, who’d slipped over my fence into the greenbelt, had found Caitlin. And I didn’t dare walk into the woods while it was still dark, not with wily, lying V on the loose. So I passed the time until daybreak gulping down coffee and repeatedly calling Caitlin’s phone. She never answered.

At first light, I slipped the butcher knife I’d kept close to me all night into a paper bag and set out. No way was I going back there unarmed! I looked in every direction to make sure I was alone before sliding on my butt down the graffiti-covered side wall of the drainage ditch that opens up to the greenbelt. I was acutely aware of the early morning birdsong, mostly because the happy sound was a stark contrast to the fear I felt. 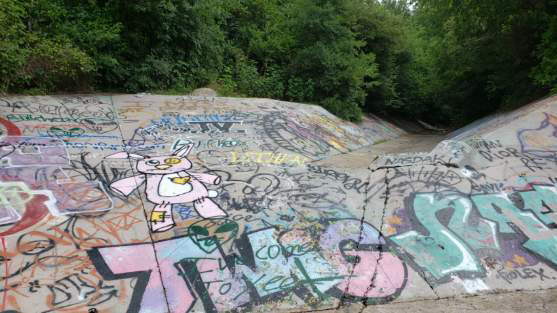 View from the drainage ditch before entering greenbelt

For me, a walk in the greenbelt is usually calming and peaceful. But on this day it felt dark and menacing. More than once I froze at sounds of movement in the brush. Was it V preparing to jump out and attack me? No, it was probably just animals. But I gripped the butcher knife tightly. All I could think of were the scary visions in my mind’s eye: a slashed tent, trails of blood, Caitlin’s dead body.

But I needn’t have worried. I found Caitlin alive and well, doing yoga stretches on a large, flat limestone rock in the middle of the creek. “I’ve been trying to reach you all night!” I called from the creek’s edge. “Why didn’t you pick up?”

Caitlin jumped in alarm, her meditation interrupted by the urgency in my voice. “My phone died. I had no way to charge it.”

Why hadn’t I thought of that?! “Some bad stuff happened last night and I was worried about you,” I said.

Caitlin slipped off the limestone rock and waded to the edge of the creek. She looked tired and bedraggled in smeared hiking pants and a dirty T-shirt. Her dark hair was a tangled mess and her skin looked rough. “What kind of bad stuff?” she asked.

I explained about V sneaking into my backyard. “I’m embarrassed to say this, but it’s my fault because I thought she was your friend and I told her you’d be camping behind my house. I think she took that literally and came looking for you in my yard. But my dog cornered her and she hurled herself over the fence. When I kept calling and you didn’t answer your phone, I thought she’d found you.”

“No, I never saw her,” Caitlin whispered.

I’d brought a thermos of coffee and handed her a cup. She took a grateful sip, but her eyes grew wide as saucers when I told her V was the anonymous person who’d tipped us off about her husband, Dr. Li Wang, back in April when we first went public about our search for our missing advice columnist, whose real name we didn’t even know at that point. 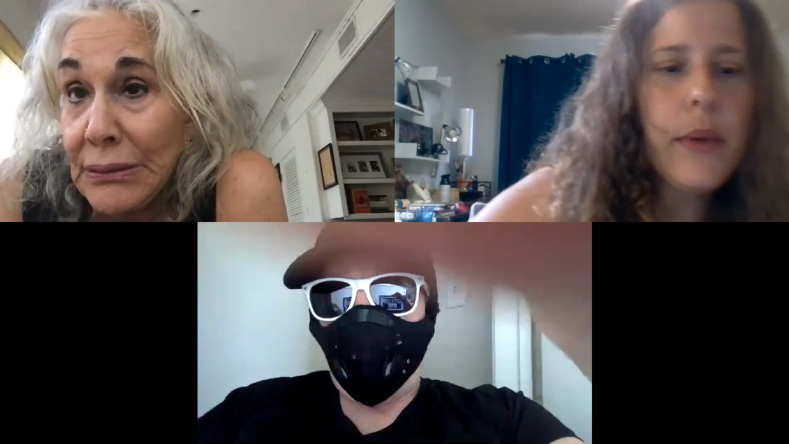 April 16, 2020 | Zoom session with V, the anonymous tipster who was after Caitlin for reasons unknown

“Listen,” Caitlin said the moment I finished. “I want you to read my journal. It’s important.”

“Yes, now. And then I want you to publish it. That may be the only way for me to find Li.”

So I sat down in a shady spot outside her tent and flipped through the pages. Then I photographed each one of them — Nicole and I would start publishing the journal immediately while Caitlin continued to write. I left the butcher knife with Caitlin just in case V came back.

The next few days were fairly calm, routine even. I’d go back and forth to the campsite every morning and evening. We used a wireless phone charger to keep Caitlin’s one mode of communication juiced up. With her lupus medication (which I’d grabbed from my client’s house), plus a few novels I had given her to pass the time, Caitlin was as comfortable as one could possibly be in a mosquito infested greenbelt at the end of May.

It wasn’t until her fifth night in the tent that Caitlin started talking about her encounter with a virologist named Greta Shultz. “She worked with my husband at UT,” Caitlin said. “When I went to the lab to try get info about Li, she slammed the door in my face.”

“Wow, that’s weird,” I said, remembering that I’d seen something about someone named Shultz when I’d skimmed Caitlin’s journal.

“Right? So I asked my researcher friend, Henry, to dig up whatever he could find on Greta, and he told me she had a somewhat shady reputation. Apparently she’s been involved in lawsuits for reporting fake data in her research. And get this: Henry said that at one point she’d been working with that Plandemic woman, Judy something or other.”

“The conspiracy theorist?!” I exclaimed. Why in the world had UT hired Shultz, I wondered silently.

In a softer tone, as if she were thinking out loud, Caitlin said, “The thing that really bothers me is that Li didn’t trust Greta, though he never elaborated on why. And the way she acted toward me when I went to the lab makes me feel certain that she knows something about, or might even be behind, Li’s disappearance. She knew he was working on a Covid vaccine. And that sometimes he shared research with his sister, Mei, who disappeared just like he did.”

We are publishing this story on Mondays and Wednesdays until it’s told in its entirety. We highly recommend starting at the beginning with our series of videos, when we first announced that Caitlin was missing til when we finally found her and met in person for the first time. If you’d like to start in the middle with her journal entries, click here.