A headline writer at the Austin American-Statesman has been disciplined for violating the newspaper’s Manual of Style and Usage by composing the following headline: “Trump Likes Coal, Not Hostile to Wind.” Amer. Statesman, 11 July 2018.

According to a spokesman for the newspaper, who spoke off the record because he was not authorized to speak, “It is clearly stated in the manual that the words Trump and wind are not to be used in the same headline. Similar prohibitions apply to the juxtaposition of Trump and Hot Air, Trump and Truth, Trump and Income Tax, and Trump and Call Girls.

“We are a serious newspaper” he claimed, “and we cannot have readers laughing at our headlines.” He admitted that the list grows longer every day, and that it is a challenge for even experienced headline writers to keep up. “But that’s their job. They either have to do it correctly or go into government work.”

Asked the nature of the discipline imposed on the errant headline writer, he said, “It’s harsh. Three weeks of compiling and indexing the President’s tweets.” 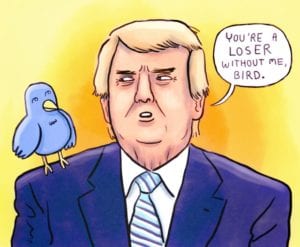