If These Walls Could Talk (REVIEW) – Neill-Cochran House Museum

Historic house museums of the Antebellum South period often have the ability to skirt around the precarious issues that surround their existence. These houses were built and run by slaves now long forgotten, unlike the white families that occupied them. The Neill-Cochran House Museum, however, is changing this paradigm with the exhibition, If These Walls Could Talk, a two woman show consisting of work by visual artist Ginger Geyer and performances by Jennifer Rousseau Cumberbatch. Not only is this a collaboration between two accomplished artists, it is also a collaboration between the house, its contents, and everyone who once inhabited it.

The show centers around two young fictional female characters, one white and the other black. Chlora is Greyer’s alter ego while Ruby Virginia is Cumberbatch’s. A dialogue card in each room displays a conversation between Chlora and Ruby Virginia discussing, questioning, debating the ceramic artworks within the current museum context. 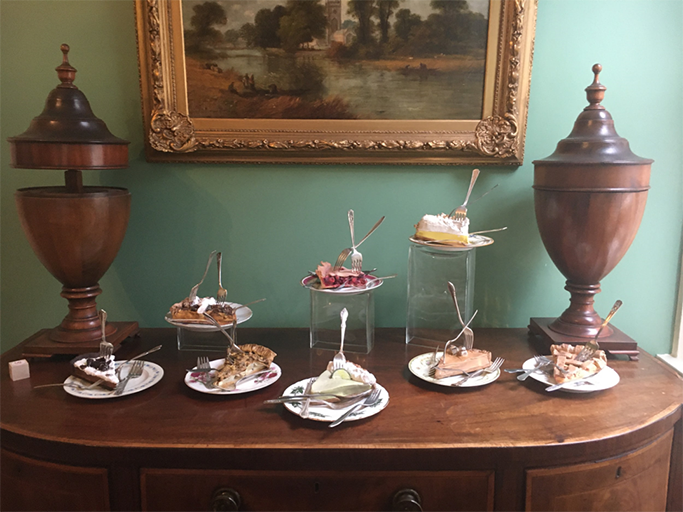 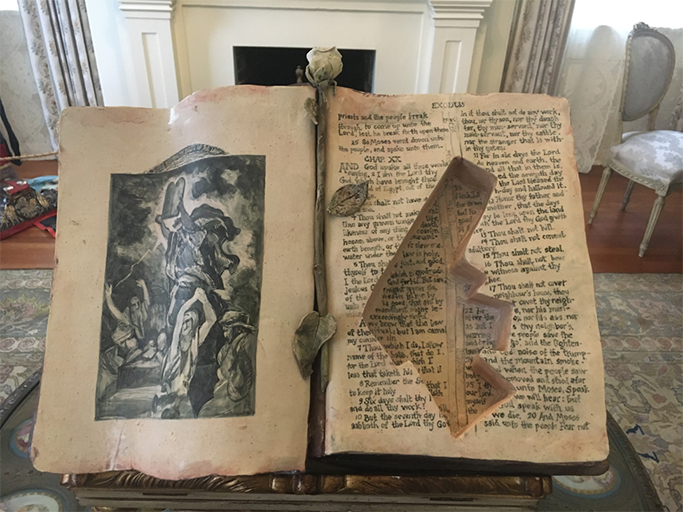 The ceramic sculptures, which derive from throughout Geyer’s ouvre, display her far ranging interests in theology, politics and art history. Her pieces appear in each room of the historic house, some looking more at home than others. On a sideboard in the dining room, for instance, are slices of pie on China plates. Sharing Slices, as the grouping is called, looks as if a Wayne Thibaud painting had come to life. Though whimsical, Geyer’s work takes on a serious religious tone in Second Amendment Meets Second Commandment. This piece, a ceramic Bible, is situated on a pedestal in the center of the French parlor room. The Bible is open to the chapter of Exodus, but ominously the pages are scooped out and cut away in the shape of a gun, while what, ironically, holds the pages open? A beautiful dried rose. The work is a deliciously provocative statement on religion and gun control.

One of the most powerful and emotionally palpable pieces in the exhibit is Geyer’s Topsy-Turvy — a doll that is half black and half white, the two bodies conjoined at the waist like Siamese twins. Geyer has placed this work in the Dependency Room, which is located outside of the main house in what were once the slave quarters. One could imagine a young black girl furtively playing with this odd dual-bodied doll, revealing the black side among her family and the white side among her owners. 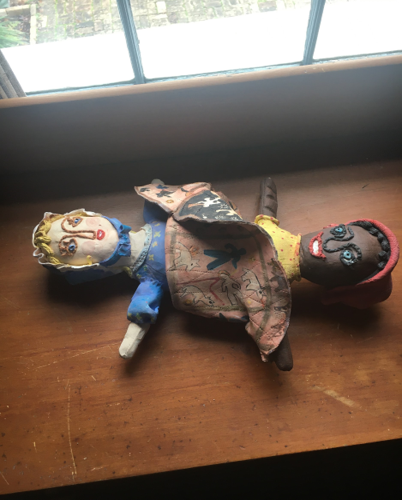 In addition to Geyer’s ceramic works, the exhibition also includes performances by Jennifer Rousseau Cumberbatch. I had the opportunity to see a snippet of one of her performances and it was truly captivating. Accompanied by a three-piece band and tap dancer, Matthew Shields, Cumberbatch transformed herself into a shoe-shining vaudeville performer. She sang and danced her way through the audience and by the end she had us all singing and clapping along with her. Similar to Geyer’s highly evocative work, Cumberbatch’s performances bring a sort of life force into the Neill-Cochran House that awakens the spirit of this old manor and brings it hurtling into the 21st century. I cannot recommend this exhibit highly enough and suggest you make sure to also attend one of Cumberbatch’s performances scheduled throughout the duration of the show.

For more information and a schedule of performances, visit the Neill-Cochran House website.

(We’ve uploaded two preview videos of Cumberbatch’s and Shields’ performances to our YouTube channel. The video quality is terrible, but thought we’d share anyway because they are so good!)