“Clearly I was white. But when I looked around at my aunts, uncles and cousins at family gatherings, I could see that I was different.”

Part 1: How I Found Out I’m Not a White Girl

The murder of George Floyd in late May affected me deeply. It’s not simply because it was a horrific thing to watch on screen, or because, even today – over 150 years after slavery ended – we are still watching Black men and women get murdered in a country rooted in the human tragedy of systemic racism. No, Floyd’s death got to me because I am not a white girl.

But I’m not a Black woman either. I fall somewhere in the middle, in the gray zone.

I was born in Slidell, Louisiana, in 1978 to hardworking, middle class parents. We lived in a small town outside of Slidell called Lacombe, where 25% of the population was (and still is) Black. I didn’t walk or ride my bike to the schools that were less than a mile from our house because my parents chose to send me to private Catholic school in Slidell from Kindergarten through 12th grade, offering me an education for which I am extremely grateful. At school I had very few interactions with Black people. If I recall correctly, there were maybe one or two kids at each grade level who weren’t white.

As a young child and into my early teens, I always identified as white. I had no reason not to. I looked white. I hung out with white people. I’d been what some might call “sheltered” from this other culture that I really knew nothing about except what I saw periodically on the news or overheard in adult conversations — Black gangs, Black violence, Black crime, etc. And then one day in my early teens, I was snooping around in my parents’ closet and came across my dad’s birth certificate. Inside the box for race, in clearly typed letters, was the word “Negro.” 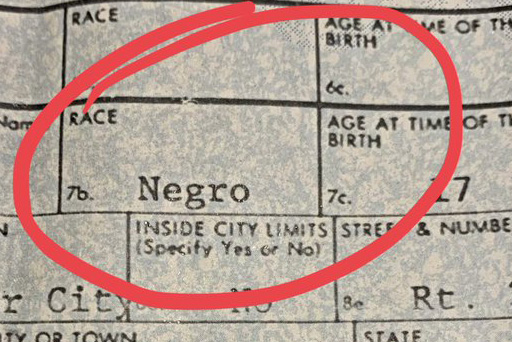 The use of the word Negro on official documents, including the US Census, has been a point of contention. As opinions on how to state one’s race change, so does the terminology. Before “Negro” it was “Colored.”

I was shocked! My parents had never talked to me about it, and when I confronted them, they told me they had never discussed it with me because it wasn’t a big deal. They explained that they had sent me to school in Slidell to separate me from some of the bigotry that Dad had faced growing up in small town Southern Louisiana. At the time, with a young heart and a mind not fully developed, I felt like my mixed race was a dirty little secret I’d been unknowingly hiding from my white friends. I felt ashamed, like I was tainted somehow. (I’d heard by this point the horrific names Black people were called.)

In all honesty, I had some inkling before I found Dad’s birth certificate that day. I’d heard a few times over the years, “Oh girl, you black!” (This was generally when I’d introduce myself to someone new and they’d ask my last name.) I always thought that was such a preposterous thing for anyone to say. Clearly I was white. But when I looked around at my aunts, uncles and cousins at family gatherings, I could see that I was different. Most of them were darker than me. It felt weird; I wasn’t sure where I belonged.

I hid this little snippet about myself for a long time. Mainly, I think, because I didn’t know how to deal with it, and also because there is so much systemic racism in the South, I didn’t want to be judged negatively because of my ethnicity.

Now, nearly 30 years later, with some maturity, hindsight and education under my belt, I am so proud of it! Regardless, I am the first to admit that I have always been able to hide behind white privilege. I am fully aware that my light skin has most likely afforded me opportunities that many in our family maybe haven’t had. I have never been scared of the cops; I have held coveted positions in the workforce; I run my own company which requires the full trust of clients who hold power in various facets of Austin’s community. I am not suffering.

But George Floyd and so many others like him have suffered. Are suffering. And the fear and injustice and hatefulness that many Black people experience daily – all of which have been placed in the national spotlight recently – made me start wondering what it was like for those in my family who came before me. I felt the need to really dig into the guts of the matter and have had the distinct honor and privilege to ask some hard questions of my dad, my Aunt V and my Aunt B. What I learned from them was both surprising and enlightening.

*This is a four-part story that will be published on Wednesdays during the month of September 2020.