The IN Between: Vy Ngo – Art Review

The IN Between: Vy Ngo
Dougherty Arts Center
Thru October 5

Moving to a foreign land in search of a better life but grappling with how to adapt to this new place while still keeping your heritage and traditions intact is a theme deeply ingrained in the American experience. It is as American as apple pie. Artist Vy Ngo’s show The IN Between deftly addresses this topic but also poses the question…how does one become “IN”cluded in the American dream? 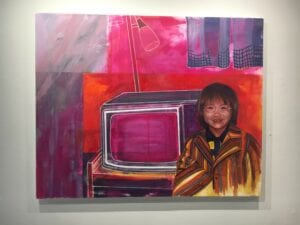 This autobiographical show is a journey through the life of the artist beginning in early childhood and running through late adolescence. As the child of Vietnamese refugees, Ngo sailed to the United States in her mother’s womb and was born on American soil. In Hand Me Downs we see a smiling five year old Ngo dressed in oversized, outmoded garb that was given to her by the church that sponsored her parents journey to America. In the background is an old TV that served a pivotal function in the lives of the Ngo family. Television was a type of oracle to glean information and connect with their new homeland, as well as a tool for her parents to learn English. Speaking with Ngo, she said MTV was the channel de jour as it was a gateway into the lives of her peers and the culture she so badly yearned to take part in. Hand Me Downs, a sweetly sentimental piece, is suffused in the high chroma glow that the artist utilizes throughout her work to symbolize her memories of the past. 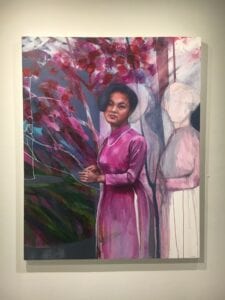 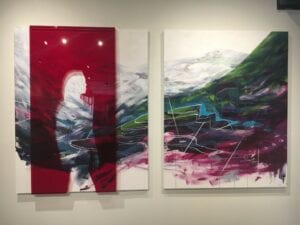 Growing up in the 1980s in a small community in rural Pennsylvania, the artist recognized at an early age that she was different from those around her. Playing the Part displays a teenage Ngo dressed in traditional Vietnamese attire but with a distinctively American haircut. She is trying to be two people in one — someone for her parents and someone for herself — wrestling with her identity as most adolescents tend to do. The stained canvas shadows that follow her are not her alter egos, but instead her true selves trying to peek through the surface. While coming to terms with her identity, Ngo is also reckoning with her cultural heritage and the place she was conceived. As the title plainly denotes, Go Back to Your Rice Paddies was one of the insults hurled at the artist by her classmates. It was yet another reminder that she did not fit the standard American mold they had deemed worthy. In this piece (a diptych), an abstracted mountain valley with tiered rice paddies is painted in rich hues with agitated brushstrokes. A red acrylic band runs vertically over a section of the left panel with a silhouette of Ngo punched out. By only existing on the surface and not within the painted plane, the artist is asserting and owning her identity as well as her disconnection to the land and all that is bound within it. 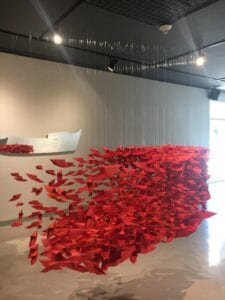 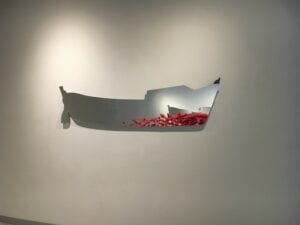 As the show progresses and Ngo journeys through her new life, departing obstinate teenage years, she seems to become more comfortable in her skin and her culture. In the next section of the exhibit, she confronts the painful reality of our present day refugee crisis, using the ark as a symbol to pay homage to her parents and the fateful journey they took while she was just a tiny spark of life in her mother’s womb. We are oddly complacent, smug and unthinking as a people; we seem to forget that migration is a natural human phenomenon that has been going on for thousands of years and will continue, particularly with the advent of global warming, long after we become particles of dust. Boats, or arks, have been the traditional method of travel for countless people seeking a new home. In 1000 Arks, Ngo and her mother created 1000 red origami arks that effortlessly float in the center of the exhibit. Strung on monofilament and suspended from a mirrored panel on the ceiling, the little red boats are delicately arranged in the shape of an ark. Two mirrors on opposite walls, also constructed in the shapes of arks, splendidly and dramatically reflect the work. Meanwhile, the mirrors also reflect the viewer (who inevitably becomes a subject in the piece) as he or she surveys 1000 Arks, and is consequently reminded that at one point in her life, or in her ancestry, she (he) was also once an immigrant. It is a poignant acknowledgement to us all that as humans we are in this boat called humanity together.