Jeffrey Gibson: This Is the Day – Art Review

Jeffrey Gibson: This Is the Day
At The Blanton Museum of Art thru September 29, 2019

This is the day, your life will surely change

This is the day, when things fall into place…

“This Is the Day” by The The 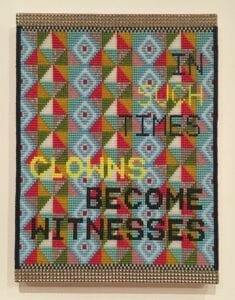 Walking into Jeffrey Gibson’s exhibition at the Blanton Museum one is greeted by wildly exuberant displays of beadwork assemblages that beg to be touched. Utilizing glass beads, metal studs and brass and tin jingles, the works spell out messages that are derived from various sources, such as literature or song lyrics. ALIVE! is one of these works that proudly exclaims, “I am Alive…You are Alive…They are Alive…We are Living!” in beaded letters surrounded by bold patterns directly influenced by narratives from Native American visual culture. Bordering the beaded messages are various metal studs and tin jingles with layers of nylon fringe stitched on the bottom edge of the canvas like fringe on the hem of a party dress. This work is a riveting affirmation of life and humanity, and a reminder to live in the present. ALIVE! sets the tone for the exhibition, and is an exceptional example of the tactile qualities that pervade much of Gibson’s art. 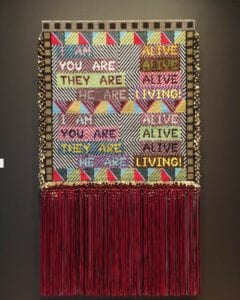 Taking his exhibition title from a 1983 song by the British new wave band The The, Gibson’s work coalesces his Native American heritage with various cultural references such as pop music, queer culture and literature. Encompassing over 50 works from 2014 through 2018, the show demonstrates his prolific output as well as his diverse range in mediums that include ceramics, paintings, installations and video.

Beadwork is seen throughout Gibson’s work, and he says he employs it as a “lens through which I want viewers to consider my patterns and choice of words.” The material speaks directly to his Cherokee and Choctaw heritage. In AMAZING GRACE multi-color beads are assembled in electrifying patterns that jolt and buzz as if they are reverberating off the walls. At the top and bottom edges are lyrics from “Amazing Grace” while in the center are lyrics from Soul II Soul’s 1989 song “Back to Life.” While the text may seem incongruous, it displays the artist’s characteristic style of combining unexpected ideas or genres to create a unique mind-bending sensibility. Also, by referencing Soul II Soul’s song, Gibson is citing queer and dance club culture — themes that run throughout his work. 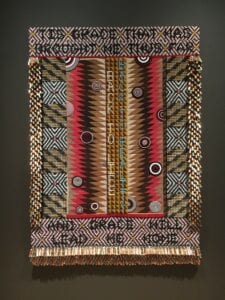 One of the most mesmerizing series in This Is the Day are the artist’s elaborately adorned helmets. All five helmets are aligned in a row on one plinth with each representing themes that the artist has explored in his career: love, the clown, peace, death and the deep sea. Crystals, charms, beads, shells, toy parts and other collected ephemera bedeck the helmets. Weighing between thirty-five and fifty-five pounds each, the helmets are more kaleidoscopic object than actual head wear. There is something otherworldly, almost rapturous about the sculptural works, and the message is that if a person were to actually wear one of the pieces they would immediately transform into the specific characteristic or theme. The helmets are like super amulets that proffer guidance and protection to the wearer in the face of opposition. This idea of wearing something for spiritual protection is not a new concept but has roots in many ancient cultures including Gibson’s ancestry. 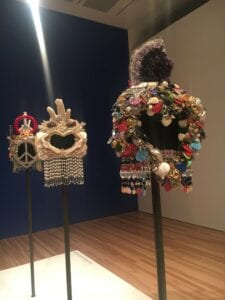 Blending disparate motifs together, Gibson has created a visually impactful world that mines his identity and heritage; however, it is a world that goes beyond the artist. Gibson’s work has the unique ability to speak to anyone and everyone — a joyful reminder that we are all interconnected in this world.