Red Glitter Lipstick: The Rise of Nu Burlesque and the Jigglewatts Burlesque Revue

The Jigglewatts and other modern burlesque troupes that travel around the country perform erotic stripping to music in stage shows. The November 7th show, entitled Starry Soiree, at the Sterling Events Center on Highway 290 is one of a monthly series scheduled to go on for almost a year. The Jigglewatts Burlesque Revue, a group of Austin originals, has begun its fourteenth season without showing signs of slowing down, and the group pursues national performance opportunities. The burlesque performance industry has showered the performers with awards. This isn’t your grandfather’s vaudeville striptease. The differences are great enough to warrant new terminology to signal the change. The term “nu burlesque” is proposed here to indicate something approaching newness under the sun.

The Jigglewatts and most modern nu burlesque troupes all seem to perform the antique form of burlesque stripping, or striptease, popular in the nineteenth and twentieth centuries in vaudeville, but with major differences. Twenty-first century troupes all seem to have upgraded the form with innovations of appeal to new generations, all sexualities, and new gender identities. The dances are choreographed around pop songs, character themes, literary tropes, movies, and historical themes, with coordinated costumes and set designs to match. Mostly gone are the same old bumps and clichéd grinds, although nu burlesque doesn’t forget where it comes from. Imaginative, now-you-see-me-now-you-don’t fan dances remain in vogue. But the defining feature that sets nu burlesque apart from the old is imagination. 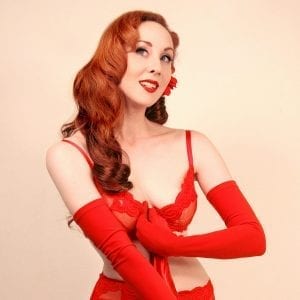 Ruby Joule, the co-founder of the Jigglewatts, has all these elements down to a T. She brings high energy to all her dances, along with self-designed costumes heavy on the feathers and sequins. Her choreography reveals advanced modern and ballet technique, dynamically executed. She emphasizes the tease, lowering her eyes and head while pealing off some strip of lingerie. Audiences usually shout while she pulls off elbow-length gloves with her teeth. She remains an erotic dream while concealing what hard physical work it is. She is the artistic director who establishes overall themes for the monthly shows such as the post-World War II period, the classic dancers, film noir and others. Her badge is the Jigglewatts’ patented bright red glitter lipstick. 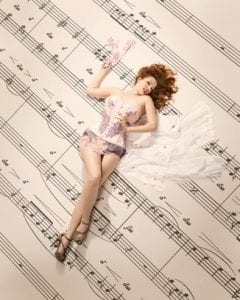 Jolie Goodnight is compact of stature, zaftig, and her torch singing makes her ten feet tall. She, too, has perfected the techniques old and new while cultivating her rare singing talent. She sings jazz, pop, and blues songs in the torch nightclub style. She electrifies with her simple strip while standing at the microphone. She succeeds in other, more conventional forms as well: she played one of the avatars of famed Texas stripper Candy Barr in Amparo Garcia-Crow’s Strip: The Musical a few years ago, when she stopped the show with another near-full-nude torch song at the microphone. Her performances are not to be missed, and her solo CDs are available at underground venues and at her shows.

Some things haven’t changed. Exposed flesh remains central, but bizarrely, the so-called “naughty bits” of the body demand continued concealment. Nipples are covered with large, circular swathes of fabric called pasties, with appliquéd sequins and feathers. The hips are circled with the so-called g-string, like a minimal bikini bottom sporting a triangle of fabric in front, usually decorated to match the pasties to form a set. The rear is simply strings to hold everything in place and is open to every errant breeze. The coverage only emphasizes and accentuates the body parts, objectifying and fetishizing them to the extreme. For these reasons, nu burlesque hasn’t escaped the opprobrium of modern feminism and more politically correct social values. These forces keep nu burlesque in the demimonde, French for the underground. Nu burlesque performers actually enjoy this because it gives them cachet. In this sense, too, nu burlesque is your grandmother’s burlesque, the stuff of disapproval and imagined shame. 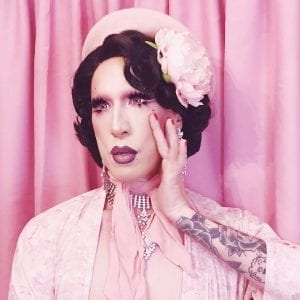 Nu burlesque features males in various modes of performance. Who knew? Alexander the Great cues his exposures and reveals with a winning smile. As a male pole dancer, he seems to have carved out his own niche. If that weren’t enough he strips out of a silvery space suit wearing a matching motorcycle helmet. Every guy in the audience wants to know where he bought his silver briefs. His signature song Rocket Man will never be the same.

Louisiana Purchase is a true headliner, a drag stripper who is clearly a male in female lingerie who doesn’t put any schtick on it, no pink fright wig with heavy black beard, no sequined eyelids, and no self-parody. He just gives exquisite dance with perfect lip-synching to a pop standard. Can we call it clean? That depends on your values. He’s definitely about sex, particularly gay sex. But Louisiana Purchase is someone perfecting an alternative art form. Someday we’ll look back upon him as a pioneer in his bittersweet struggles. His work is very well done. He has just won a 2019 Austin Chronicle Best of Austin Award for several years in a row (I don’t remember the exact number, but it’s a lot).

Describing the Jigglewatts shows can go on quite a while. It is better to see them for oneself. Their monthly series at the Sterling Events Center will extend into 2020. They are for adults who are young at heart and who want to see how the underground lives.