A world we are familiar with, but that no longer exists…

I love going to the Wally Workman Gallery for several reasons: it’s in a convenient part of town that still reflects some of Austin’s old charm; the gallery, situated in a two story house, features the work of artists who are usually quite straightforward and easy on the eye; Wally’s openings are always well-attended and fun — never know who you’re going to run into there. 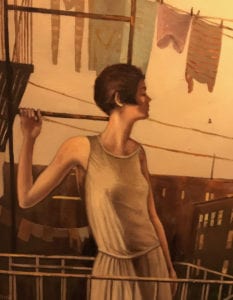 Last night I went to the opening of Spanish artist, Juan Luis Jardi, a realist painter whose work has undertones of surrealism and a certain element of fantasy. Mr. Jardi, who lives in Barcelona, admits that he likes to paint times past, to capture the mood of nostalgia and yearning that occurs when one looks back on earlier days that are gone, irretrievably slipped through our fingers. 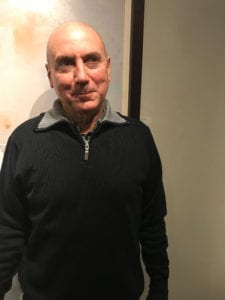 He likes to paint serialized and disappearing images of a single person often against the background of a conventional setting. 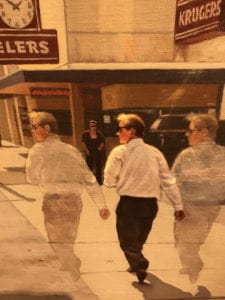 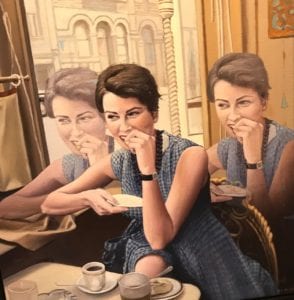 Detail from Breakfast in Montparnasse, Oil on Canvas 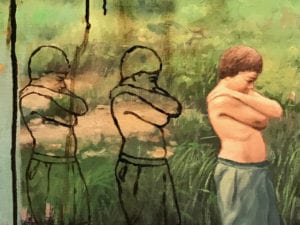 Detail from Children in the River, Oil on Canvas 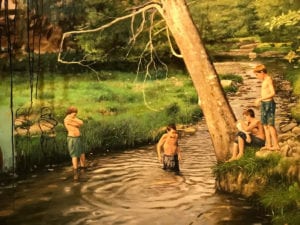 Children in the River

In one piece, La Montana de la Suerte, which Mr. Jardi told me is his favorite in the show, he completely breaks with reality in a painting of a tall white mountain reminiscent of the alps with a big white bunny rabbit sitting on its pinnacle. (There are two bunnies on either side, again the theme of duplicated images.) 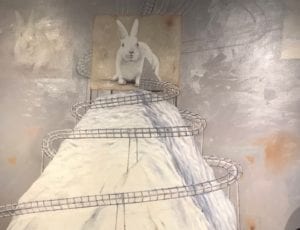 I never learned the significance of the bunnies, but Mr. Jardi did mention that he is moving more and more toward abstraction in his work, and therein probably lies some of the answer. I suggest you check out this dark but playful show that manages, in some of the paintings, to lead us through an odd little crack in time to a world we are familiar with but that no longer exists.