Jason Webb is our selected artist for July! ArtProfiler’s Artist Monthly highlights one artist per month for exceptional work in his or her chosen medium.

Jason Webb was born and raised in Round Rock, TX. He studied computer animation and studio arts at Jacksonville University, completing his BFA in 2008. Jason was honored as fine arts student of the year by faculty on the heels of a successfully defended undergraduate thesis which entailed mapping hand painted acrylic textures onto computer generated objects. After graduating Jason moved back to Austin, TX, and refocused his visual art practice exclusively to acrylic paintings, his subject realist depictions of detritus and urban blight. He has exhibited extensively in Austin, and from 2009 to present has been a loyal participant in Big Medium’s studio tours. Jason frequently donates artwork to annual fundraising events benefiting local arts institutions. He is a three time Hunting Art Prize finalist and winner of the 2012 Eye’s Got it! competition which awarded him a solo exhibition at grayDUCK gallery in 2013. Since then he’s had a solo show at Mcmurtey Gallery in Houston, and had work in group shows across the country including Brooklyn, NY, Fort Wayne, IN, and Davis Gallery in Austin, TX. 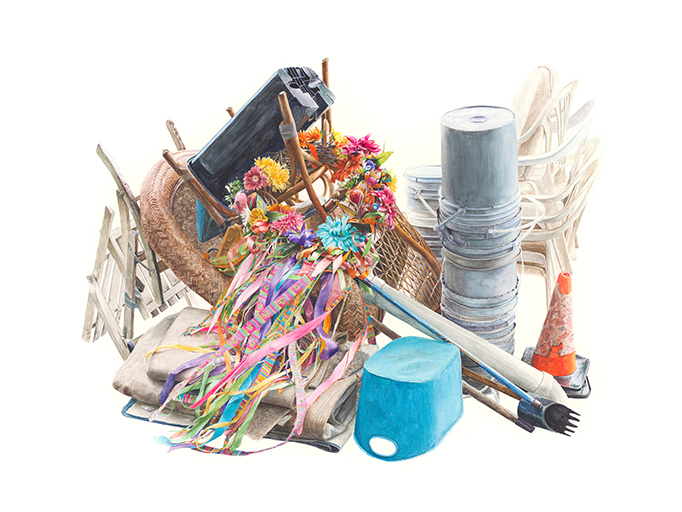 Discard Piles is a series of paintings depicting piles of trash from Austin’s residential bulk pick-up, a regularly scheduled city service for disposal of oversized trash. Area residents drag deteriorated, outdated, valueless possessions and assemble them as incredibly unusual constructions on the curb. My process starts with photographing the most magnificent piles I can find exactly as they’ve been arranged on the curb. From those photographs, back in the studio, I meticulously paint individual piles isolated against white backgrounds. Every pile is like an anonymous ready-made sculpture, evoking imponderable stories. Traces of former owners’ lives emanate from the possessions they’ve chosen to discard. When viewed as a series, the piles present anthropological findings. Patterns emerge, with certain objects undeniably common: cheap plastic toddler toys, rotting lumber, leaky garden hoses, mattresses, soiled textiles, and unsalvageable furniture. Fundamentally, my work, this series in particular, is concerned with utility and impermanence. Exhausted of their utility, their ownership relinquished, these discard piles are reminders of the transitory nature of existence.