The latest dance show by the Kathy Dunn Hamrick Dance Company (KDHDC), entitled Moon, is an original work marking the 20th season of the company’s existence. The company concentrates on contemporary, shoes-off, athletic dance technique and allows audiences to receive the visions and deeper meanings arising from its virtuosic performances on stage. Saying the shows are abstract is only partly true as well, as the thematic material is built from stories, humor, everyday experiences and nature; in this case, the moon, earth’s companion.

Moon is a double whammy. Besides being a dance show, it is also a live music concert. Performing live with the dance company throughout the short, one-weekend run is line upon line percussion (always lower case), the Austin favorite and award-winning three-person percussion ensemble comprised of musicians Matthew Teodori, Adam Bedell, and Cullen Faulk. The music and movement performers prepared their material separately and then brought it together for the performance. The music and movement meshed perfectly in this fifty-five minute ode to Luna. In her program director’s notes, Kathy Dunn Hamrick wrote, “I think of it as a coexistence between the movement and the music.”

The coexistence, under Stephen Pruitt’s lighting sets, began boldly and stayed that way, with surprise entrances and exits. The three costume sets, all by Hamrick, featured bright white tops in the first group. The whiteness, set against the black backdrop, showed glowing auras around the dancers, either an incidental or deliberate reference to moon-glow, the shine around the moon on clear nights.

The performance was full of these lunarian allusions, from hoop arms sweeping overhead horizon to horizon, to moonlight strolls and struts, romantic tokens of bygone times. The duets, however, were anything but trite; they seemed to explore the deeper complexities of relationships. The duet by Veronica DeWitt and Jairus Carr was especially compelling. They entered slowly, almost at a crawl and at the same pace as the second piece of music, also just starting. Noteworthy combinations of dance by the company are too numerous to mention. The performers in addition to DeWitt and Carr were Carissa Topham, Cara Cook, Lisa Anne Kobdish, and Clay Moore.

The show’s venue, Ground Floor Theatre, is proving itself a flexible, capacious and inviting space for dance shows. The theatre and its owners, Lisa Scheps and Patti Neff Tiven, are the recent winners of six B. Iden Payne Awards for their work and artistry. Moon benefited greatly from their work.

Moon was a strong and skilled show full of feeling, performed by a physically attractive and highly talented company. The Kathy Dunn Hamrick Dance Company elevates Austin’s reputation as a national center for contemporary dance. Audiences wait impatiently for the company’s two full stage productions per year. We hope to see more collaborations with line upon line percussion. The two companies seem always to be great matches for each other. 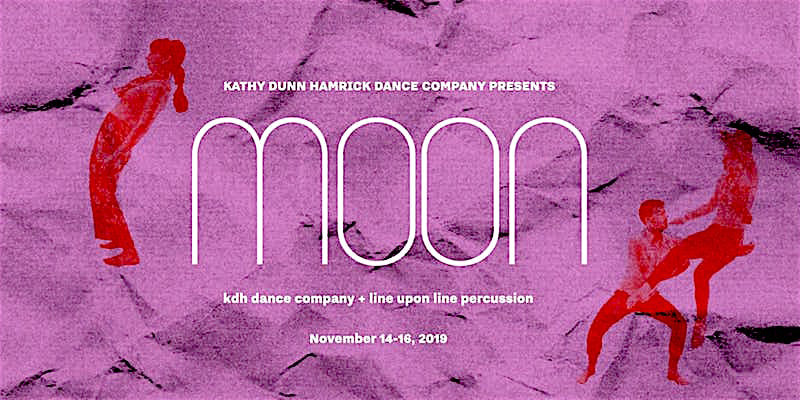