From the Editors 4 years ago

Denise M. Fulton is our hand-selected artist for March! Artist Monthly is a new feature for ArtProfiler that highlights one artist per month for exceptional work in his or her chosen medium. 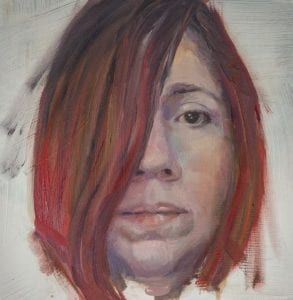 Denise M. Fulton grew up in Ohio, where she earned a BA in journalism and a BFA in graphic design and painting. After graduation, she went to work as an interface designer at Microsoft. She remained in the corporate world for nearly twenty years, working for companies such as DreamWorks and Electronic Arts, managing creative teams working on multi-million dollar projects. In her free time she continued to develop her art. Finally recognizing this as her vocation, she began her professional fine-art career in 2009. Since then, she has exhibited her work in shows across the country. Denise lives and works in Austin, Texas, where she is represented by Davis Gallery. She is the director and co-founder of Atelier Dojo, Austin’s new realist art studio.

My current series plays with the idea of projection – both literal and psychological. By projecting patterns onto the figures, I give form to the biases and emotions that influence how a person is perceived. Most of my work focuses on the female form and reflects on the way that women’s roles are circumscribed by our culture.

When I first got serious about painting, I focused on landscapes, primarily trees. As my work developed I became more and more interested in representing the human figure which has since become the focus of the majority of my paintings. As I sought to improve my representational skills, I was frustraed by the lack of local educational resources. This led to me becoming a cofounder of Atelier Dojo, a realist art school that will open in April of this year. I am grateful to have found a supportive community of figurative artists and want to share that gift with other aspiring artists.