The image of a black person with a watermelon is sadly an all too recognizable racist trope in American culture. Imagery such as the watermelon, the mammy and sambo figures, blackface, and the Confederate flag are the deviant subjects in Michael Ray Charles’s current exhibition titled The Artist as Archivist at the Umlauf Sculpture Garden and Museum. 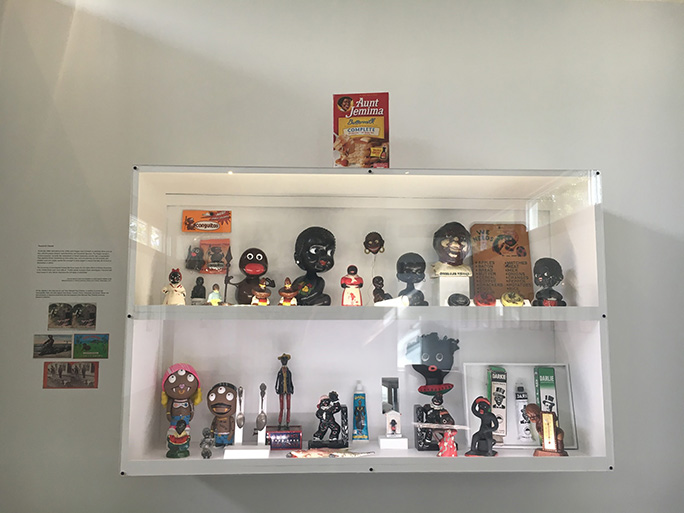 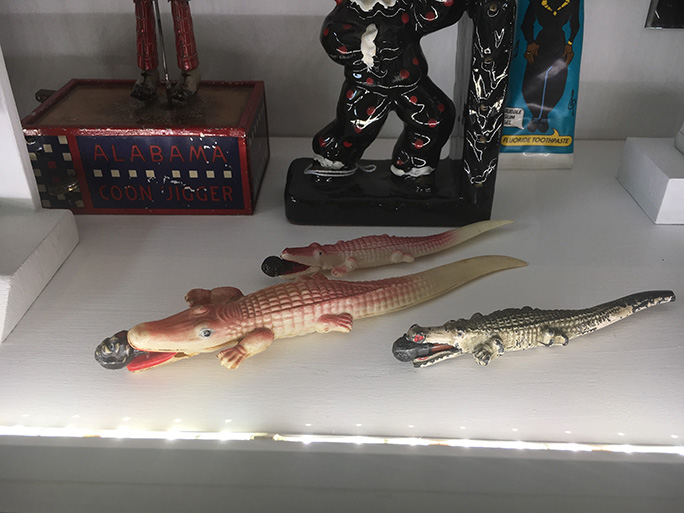 Shrouded in a glass vitrine is Charles’s personal collection of “Black Americana” (more accurately described as “contemptible collectibles”). The memorabilia, if one can call it that, display a range of objects from different periods in history. Among the most odious artifacts in the collection are three variously sized alligators, each with their jaws clamped on black heads, ready to devour all traces of these people. There are also objects of use such as bookends, salt-and-pepper shakers and toothpaste all emblazoned with a black character shown in a stereotypically demeaning and derogatory fashion. Artists of this time often displayed African Americans as dense, untrustworthy individuals with affectionate, childlike souls. One has to remember that these objects are not bygone relics. Many could readily be found in recent decades, and sadly there are still occasional modern-day pieces that evidence this ongoing practice. The artist uses these abject keepsakes as references to incorporate in his paintings and prints. Similar to artist Fred Wilson’s Mining the Museum, Charles is mining the depths of popular culture to invoke a cultural and historical intervention. 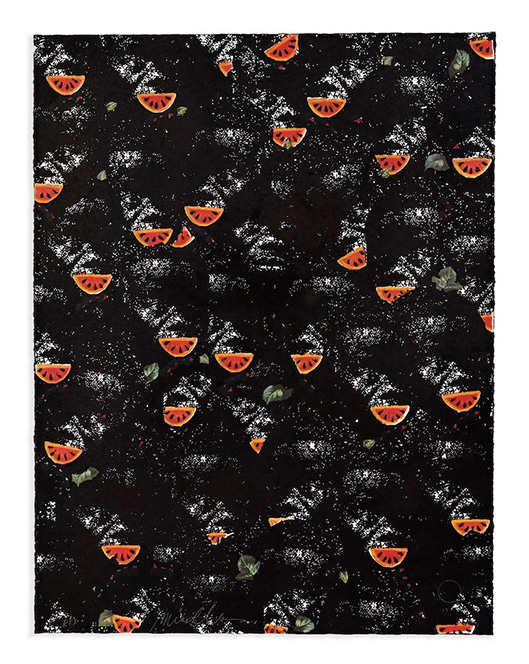 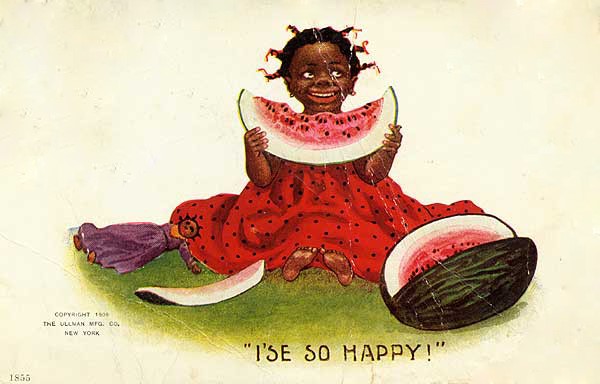 Watermelons proliferate the surface of many of Charles’s works including Every Head is a World, Every World is Head #7 which is the last work in a series of fine art prints done in collaboration with Austin’s Flatbed Press. In the print, a young black man’s face is repeated countless times consuming the white paper. Using black ink as the skin tone instead of a more natural hue references the artist’s archive of racist objects with their exaggeratedly darkened skin as well as serving to further display the horrendous subjugation of African Americans in white society that continued all the way up to the civil rights era (and counting). Slices of blood red watermelons cover the mouths of the people, seemingly silencing them and vividly dotting the paper like a blight on a crop. The watermelon has a convoluted history in African American culture. Considered one of the few crops a free man could grow and sell after the Civil War, this juicy red fruit was first deemed a symbol of freedom and prosperity. Inevitably, however, whites became threatened by the success of the black man growing watermelons as a crop, and gradually managed to alter its image so the fruit would assume a pejorative connotation — the smiling submissive black man, the loving mammy — which was a blatant mechanism of control and power on the white man’s part. 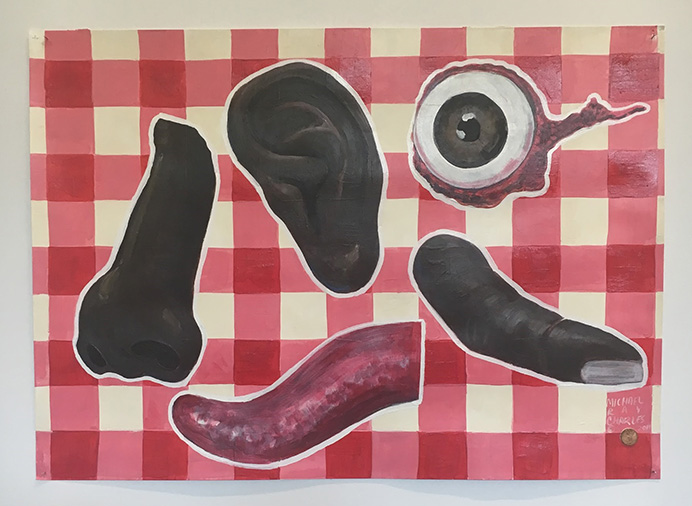 Lining the length of a wall in the exhibit is the Forever Free series of paintings. Each one presents a harsh and disconcerting theme enmeshed in African American history. In Forever Free (Picnic) Charles paints black body parts, specifically a nose, a tongue, an ear, a finger, an eyeball while rendering the background in a red and white gingham pattern. The work is eerie and gruesome. Conversing with the curator, Katie Robinson Edwards, I learned that after a black person was lynched, the white audience would often clamor to take home souvenirs of the dead which were frequently body parts. Censure is not an option for Charles or his art and it shouldn’t be — Forever Free (Picnic) potently demonstrates his unwavering ability to confront a horrific past. 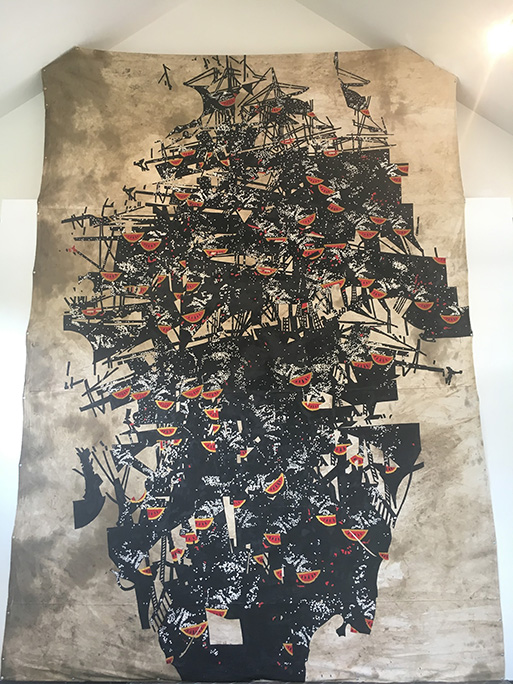 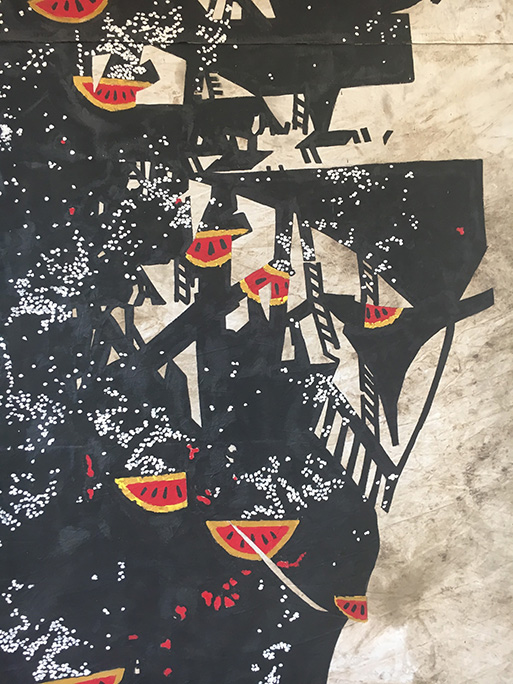 The past begins in 1619 for African Americans when the first slave ship sailed into coastal Virginia. Charles commemorates this occasion in Forever Free (Desire), a massive floor-to-ceiling painting on unstretched canvas. Silhouettes of black sailing ships collide and break into fragments on the stained surface. Layered on top of this are pointillist images of black children painted in white with watermelon mouths. The painting dominates the space, but it is only after one steps away that the full magnitude of it sinks in. The jumble of ships has an odd likeness to the game of Jenga: if one miniscule piece is removed then the entire thing crumbles into a thousand pieces. Perhaps the institution of slavery could be thought of the same way — slavery has been dismantled but the problems surrounding and resulting from it have yet to be resolved, and the blocks put back in the box. The work of Michael Ray Charles is undeniably powerful and at times hard to swallow, but it is definitely needed in these times of disunity and increasing racial division.

The Atlantic – How Watermelons Became a Racist Trope