Minstrel Show – a form of theatre that paved the way to the American entertainment we see today, but that has, thankfully, been put to rest

Last week we shared an article about blackface and why it is now considered an American taboo. In the US, blackface gained popularity by way of the minstrel show, a theatrical performance experience that gained popularity in the early 19th century and continued on until the 20th century. The whole point of minstrelsy, in its early days, was to entertain white people with comic enactments that made fun of, degraded and dehumanized Blacks by presenting racial stereotypes through comic skits, variety acts, music and dance, depicting those of African descent as dim-witted, lazy and buffoonish.

The earliest minstrel shows were performed by white male minstrels—traveling musicians—who painted their faces black and traveled around the country, appearing onstage as caricatures of slaves. Blackface minstrelsy was the first form of theatre that was distinctly American, and it shaped the way whites viewed Black people. The shows were extremely popular, but also very controversial. Integrationists complained that they portrayed happy slaves while at the same time making fun of them (minimizing the horror of slavery), and Frederick Douglass described blackface performance as “…the filthy scum of white society, who have stolen from us a complexion denied them by nature, in which to make money, and pander to the corrupt taste of their white fellow citizens.”

Minstrelsy’s rise in popularity coincided with the growth of the abolitionist movement. Notherners worried about oppressed Blacks in the South but had no idea what the slaves’ daily lives looked like—minstrelsy was very inconsistent on this subject (no doubt because the shows’ depictions were created from white mens’ perspectives), and sometimes presented slaves as happy, while portraying others as victims of an inhumane institution. In the 1850s minstrelsy became extremely mean-spirited with song lyrics and dialogue that were racist and satiric, and white in origin, though minstrel companies claimed that the songs were from African culture. There were songs in which Blacks were “roasted, fished for, smoked like tobacco, peeled like potatoes, planted in the soil, or dried up and hung as advertisements.” Also lampooned were aristocratic whites (politicians, doctors and lawyers) and the subject of women’s rights (ridiculing the notion). 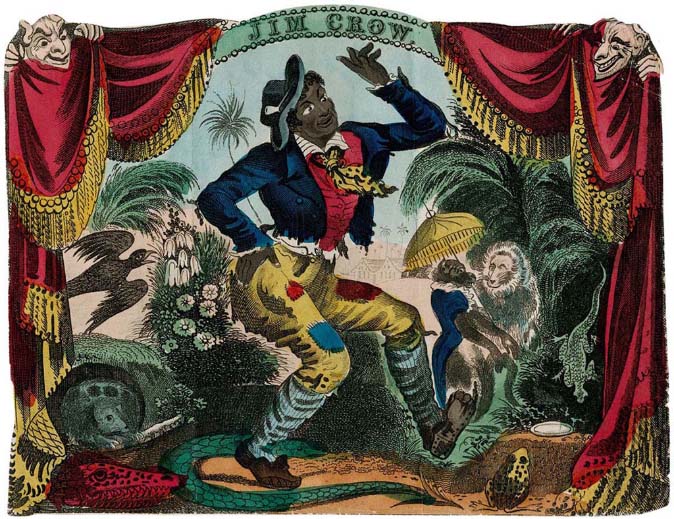 Probably the most famous actor of the blackface minstrel was Thomas Dartmouth Rice, more popularly known as “Jim Crow,” but there were other noteworthy performers and companies like the Virginia Minstrels and the Christy Minstrels that made a splash on the scene and lasted for years. The Christy Minstrels established the format of the minstrel show, and once they did, it changed very little thereafter.

Generally, minstrels were presented in three parts. The show usually opened with a chorus, often as a grand entrance, and finished with the players arranged onstage in a semicircle with the interlocutor in the center, and the end men—Mr. Tambo and Mr. Bones—at the ends. (More on these characters below.) What followed was a string of jokes between the interlocutor and the end men, with ballads, comedic songs and instrumental numbers (usually the banjo and violin) spaced throughout. Moving into the second part of the minstrel show, the audience was treated to an olio, a mixture or medley, including the infamous stump speech—when one of the end men would mount a platform and give a speech of malapropisms and nonsense in a parodied version of Black Vernacular English—and individual acts that ended with a hoedown or walk-around in which each member did a specialty number while the rest of the players sang and clapped. The final act included farce, burlesque or comic opera—a slapstick musical plantation skit or a send-up of a popular play. 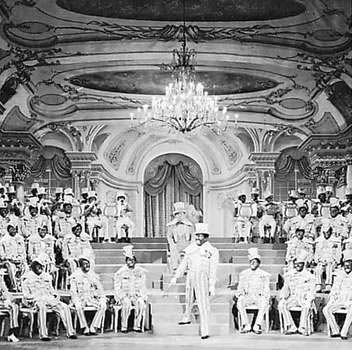 Minstrel shows featured several stock characters, perhaps most notably “the slave” (Jim Crow) who relied on low-comedy—boasting, boisterous jokes, drunkenness, buffoonery, ignorance, slapstick and farce—to entertain, and “the dandy” (Zip Coon) who dressed in high style and attempted to appear dignified but spoke in puns and made a mockery of free Blacks. These slave and dandy characters were further divided into sub-archetypes, some of the most popular detailed below. 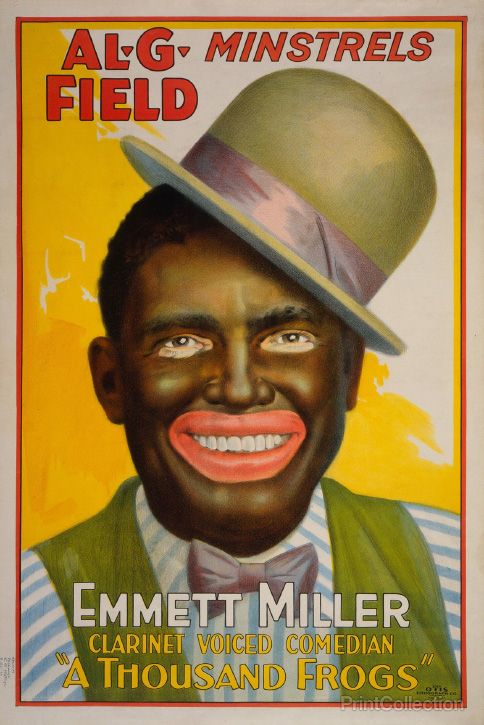 Old Darky or Old Uncle – the head of the Black family; his character was not too bright, but he was loving and held family and friendship in high regard; popular figure in plantation skits

Mammy or Old Auntie – Old Darky’s counterpart; matronly, sensibilities of a peasant woman, lovable to both Blacks and whites; her main role was to be the mother figure of the plantation family

Mulatto Wench – light skin and facial features of a white woman, but portrayed as a woman of sexual promiscuity with the exoticism of a Black woman; her flirtatiousness made her a common target for male characters

Black Soldier – merged qualities of the slave and the dandy; was made fun of for thinking his soldier uniform made him the equal of his white counterparts

Spirituals – known as jubilees; entered the repertoire in the 1870s when Black performers started touring with their own minstrel shows; this period marked the first undeniably Black music in minstrelsy 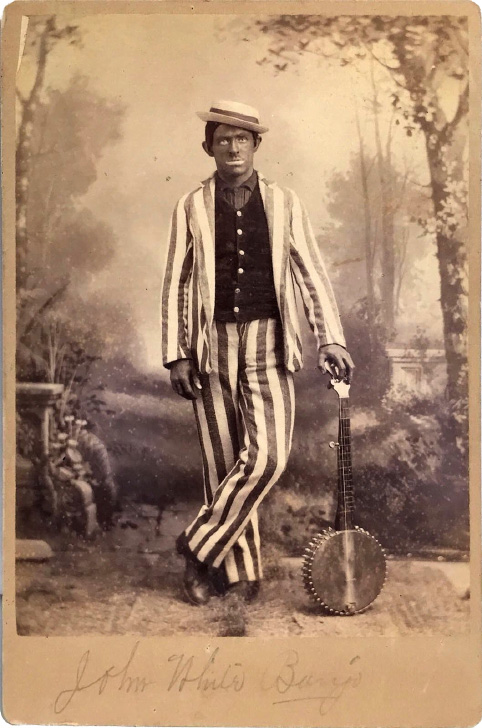 While most white patrons of the minstrel theatres liked to see Black people acting foolish onstage, there were some who were curious about authentic Black song and dance by actual Black performers. Troupes composed of Black performers came after the Civil War, and the minstrel show was the only theatrical medium in which a Black performer could support himself, though even the Black superstars made less than the white performers. Many of these companies were run by black owners and managers, and the repertoire featured music by Black composers. The actors still wore blackface for a time, no matter how dark-skinned they were, but eventually only the end men “corked up” (painted their faces black). These companies had something the white minstrels did not—true delineation of Black song and dance because of their ethnicity. Racism made minstrelsy a difficult profession for Black people. When they performed in Southern towns, the actors had to stay in character when off stage—dressed in raggedy clothes with a smile on their faces—and usually left town pretty quickly after performances. Some hired trains or built custom sleeping cars with hidden compartments in case things got ugly. Most of these troupes didn’t last long. 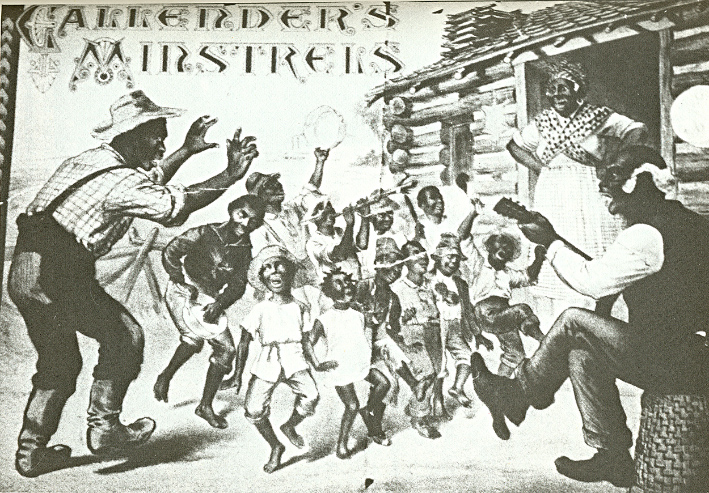 In the early days Black minstrelsy wasn’t much different from white minstrelsy. But in the mid-1870s, Black troupes added jubilee singing, religious themes and a high-stepping, brass band burlesque, a practice first introduced by Callender’s Colored Minstrels who were popular in both the US and Britain in the late 19th and early 20th centuries. Black minstrels worked subtly to change racial stereotypes and to poke fun at white society. Much of their audiences were Black, and while historians debate why this form of entertainment was popular for Black people (given its over the top racist tone), many think that it was simply the fact that there was an opportunity to see some of “their own” representing their culture. They certainly got a lot of the jokes that flew right over white peoples’ heads. And in the end, the minstrel show paved the way for Blacks to participate more fully in American entertainment.

The minstrel show was most popular between 1850 and 1870, but lost steam after the Civil War. Professional actors stopped practicing the tradition and it gradually became something only amateurs performed into the 1960s.  By the turn of the 20th century, minstrelsy had been replaced by other variety shows and musical comedies, namely vaudeville—a series of unrelated dances, music, circus acts, etc., grouped together into one show—which would later be coined “the heart of American show business.” It’s not just vaudeville that shows traces of the minstrel shows’ influence; radio, television and film of the 20th and 21st centuries provide clues to minstrelsy’s racial stereotyping and aesthetics. Recent prime examples are the 1970s and 1980s TV comedies Sanford and Son, Good Times and The Jeffersons, though many earlier films like the 1920s The Jazz Singer and Walt Disney’s original Mickey Mouse harken back to the time of minstrelsy. 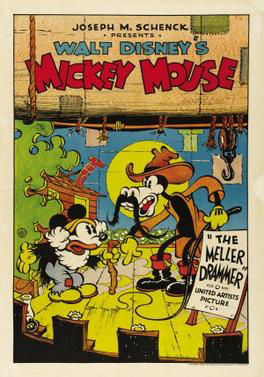 This is a poster for Mickey’s Mellerdrammer.

The minstrel show made anti-Black propaganda palatable and played a dominant role in shaping white people’s assumptions about Blacks. The racist archetypes portrayed by minstrelsy’s stock characters still exist today. Some say that this is even true in 21st century hip hop culture, pointing to sketch comedy shows like Hee Haw, and to a lesser degree, Saturday Night Live and In Living Color, and claiming that Black entertainment exploits African American culture much like the minstrel shows did over a hundred years ago.

To me, it’s interesting to see the evolution of American entertainment. While I would never approve of blackface performance or dehumanizing and degrading anyone of any color, I am grateful for some of the things that came out of the minstrel shows. Some of minstrelsy’s jokes are still told today—Why did the chicken cross the road? And stand-up comedy is nothing more than an adaptation of the infamous minstrel show stump speech. It’ll be fascinating to see what American theatre looks like in 50 more years.