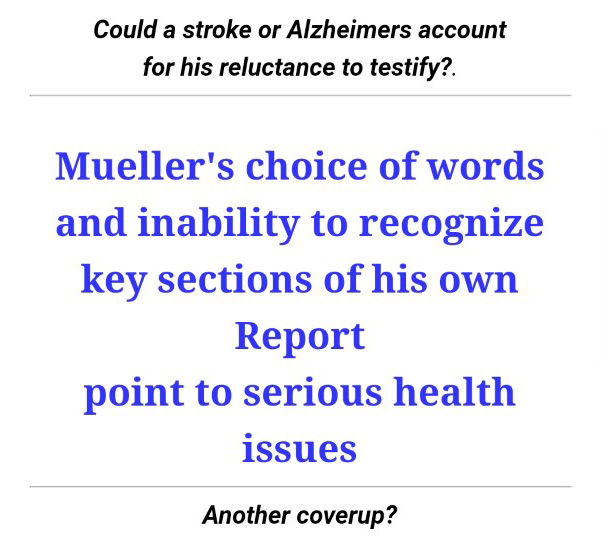 STRATEGIC BLUNDER: INSTEAD OF PRAISING SAINT BOB, DEMS SHOULD HAVE DEMANDED TO KNOW WHY MUELLER ACCEPTED DOJ’S LIMITATIONS ON HIS TESTIMONY

It never made sense that Robert Mueller, 74, universally praised as a hard-charging, smart, honorable former U.S. Marine and FBI director, whose term was extended to 12 years by unanimous consent of the U.S. Senate, would have to be subpoeanaed to defend his Report before Congress.

It never made sense that he wouldn’t want to explain to Congress and the American people why it was necessary for him to write a letter to the Attorney General complaining about the way Barr had deliberately mischaracterized the conclusions of his Report and the terms of his engagement.

It never made sense that he would shrink from disputing the Attorney’s General’s statement that Mueller’s Report could have stated that the President’s actions constituted criminal obstruction of justice but the fact that it did not mean Mueller was satisfied the President had done nothing wrong, when the Report said just the opposite.

And it made no sense yesterday that he, now a private citizen, would have agreed to limitations on his testimony so strict that he refused to utter the word impeachment when asked what his Report was referring to when it stated the Constitution contains a provision for punishing a president who commits high crimes or misdemeanors.

It was only after he finished reading his short opening statement and began attempting to respond to questions from members of the House Judiciary Committee, that it suddenly all made sense: Robert Mueller’s faculties are much diminished, likely the result of a stroke or the onset of Alzheimer’s disease. 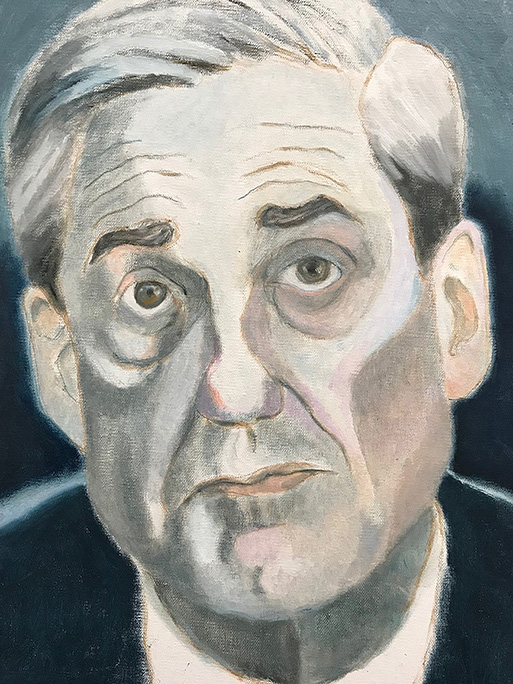 Detail of American Deity by Nicole Jeffords, Oil on Canvas

Physically, he looks very much the same as he did when he was FBI director. But all you have to do is compare his testimony yesterday with earlier testimony or videotaped presentations found on You Tube to conclude that Robert Mueller is not the same vital ex-Marine he was 10, five or even two or three years ago.

He refused to answer something like 200 questions and most of the ones he did answer, he answered with one of two words, “true” or “correct.” All manner of excuses or explanations for his taciturn responses were given by television’s talking heads, including the dozen or so Democratic Members of Congress who rushed to MSNBC when the questioning was finally over.

But not one of them had anything but praise for Mueller. They found nothing strange or troubling about his fumbling for answers and failure to recognize passages from his own Report that were read to him verbatim. He couldn’t even remember which president had nominated him for the first position he held that required Senate confirmation.

It was only late last night that Brian Williams dared to suggest that Mueller seemed “diminished.” One of his guests speculated that the Democrats hadn’t raised the possibility that his unwillingness to engage was because his mental state was such that he couldn’t.

It was the elephant in the room that no one really wanted to talk about because it might lead to questions about whether Mueller was really the author of the Report itself—which would explain why he didn’t seem to recognize the passages that were read to him.

My hunch is that he was forced to make a Faustian bargain. Or that someone made it for him.

In return for not revealing the serious health issues that limited Mueller’s supervision of the investigation and writing of the Report, which Trump and his accomplices in Congress could have used to invalidate everything in it, Mueller agreed not to make any public statements about the Report and to answer the questions yesterday exactly as the gentleman next to him told him to.

I’ll go even further out on a limb: I bet that gentleman next to Mueller, to whom he turned before he answered many of the questions, was in direct contact with Barr’s office over on Pennsylvania Avenue, where a secret war room was probably set up to make sure Mueller’s “trues” and no comments revealed only what was already in the Report.

It wouldn’t surprise me if one day we learn the Russians had a hand in developing the strategy that’s tied the Democrats up in knots. They may even have had someone over at the Justice Department yesterday. 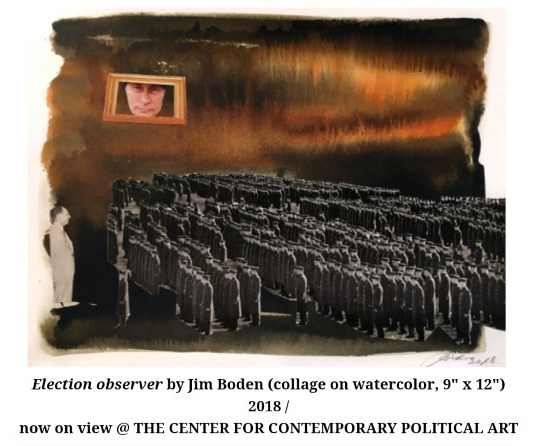 Indeed, that may have been what Mueller was trying to signal the one time he came alive during the hearings, when he said the Russians had already begun implementing their plan to re-elect Trump and neutralize the United States as a global power.

For their part, the Democrats must have decided to go along with the ruse that Mueller was competent in order to preserve the substance of his investigation. But, what became apparent yesterday was that the evidence in the Report needs someone who can create a compelling narrative out of it.

Because the Report has Mueller’s name on it and because everyone he hired, it seems, was a Democrat, there’s no substitute for Mueller himself—which is a serious problem, especially after yesterday.