The history of what it means to be Louisiana Creole is both vast and hard to define, but my family’s culture paints a good picture.

Editor’s note: This is a four-part story that will be published on Wednesdays during the month of September 2020.

My grandfather moved south from Missouri years before he married my grandmother, a Southern woman whose parents (whom I never met), were in a biracial marriage – her mother was white, her father Black. My dad was born in New Orleans in 1953, the sixth child in a family of 12 children! Dad was very young when my grandparents moved the family to the small town of Lacombe on the north shore of Lake Pontchartrain, forty-five miles away from The Big Easy. 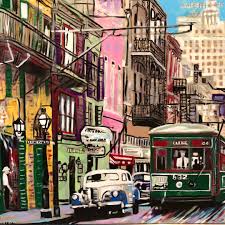 Their family was extremely poor. They lived in a small house with only three bedrooms; the kids all shared beds that were crammed into tiny rooms (from oldest to youngest, there was a span of 24 years, so not all the children were in the house at the same time). At Christmas everyone usually received only one item and one new outfit. My dad bought his very first bicycle with his own money from his first job when he was 16 years old.

My grandfather was a bricklayer and enjoyed fishing as a hobby, but his favorite pastime was gardening. In fact, his garden took up the entire backyard. They used a hand pump to get water out of the well that they then used to hand water all the vegetables. (I think about the fact that I just turn on the hose and stand there.) “We had enough potatoes to last for months,” Dad told me. “Corn, green beans, cucumber, tomatoes…”

And they raised hogs, too, which my grandfather butchered himself! With all that homegrown food, my grandmother, whose job was to take care of the kids and the home, cooked up a storm. Dad told me she made homemade biscuits every day. “She could flat out cook!” he said. “She could take nothing and make a meal out of it.” Smothered potatoes with onion and bacon and hand cranked ice cream made from rock salt and ice are two of the things Dad remembers fondly. 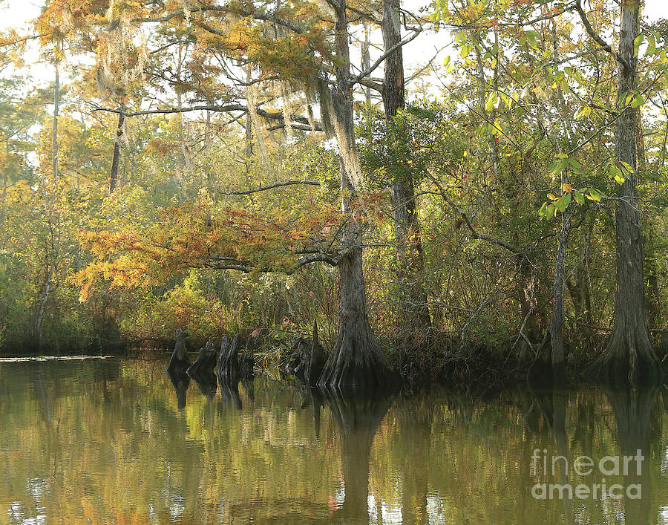 Bayou Lacombe which feeds into Lake Pontchartrain  (When I was growing up we’d take the boat out almost every weekend and meet other family out on the water for swimming, food and fun. Yes, there were alligators. And yes, we swam in that water anyway.) | Photo credit: Luana K Perez

He recalled for me some of his best memories growing up – crawfish and crab boils and fish fries, all seafood they had caught themselves. Down on the bayou, they had picnics with hot dogs and Koolaid, and there was always a big family meal on Sundays. Dad remembers two of his older sisters would make “all these cakes with pecans on ‘em” – I could hear the smile in his voice during our phone call as he remembered how good they tasted. “We had some of the best times as kids with nothing.” He means with no money. “You know why?” he asked me. “Because when you have everything, you don’t appreciate it.”

Every year for New Years, my grandmother would make hot eggnog. Ma-Maw, who everyone also called Lu Lu, would make two batches – one for the kids, alcohol free, and one for the adults, loaded with bourbon. All of us kids would sneak cups from the adult batch when no one was looking! I always looked forward to these parties – everyone was there and there was music, dancing, laughter and fireworks. All the parties my family had were like this (save the fireworks). “Back then,” Dad told me, “you didn’t have to get invited to someone’s house, you just showed up.”

My dad’s family is steeped in tradition, mostly surrounding great food and celebration. And even though my grandparents have passed on, all of their offspring still carry on much the same way they did when I was a kid. Go to anyone’s house, at least half the room will be dancing. 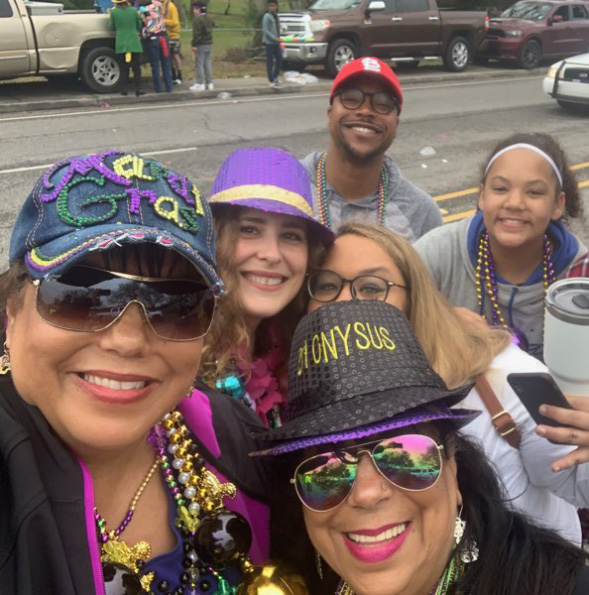 Me with my gorgeous aunts, cousins & niece at Mardi Gras 2020

For the last several years, I’ve been taking my six-year-old son home to experience Mardi Gras — he loves it, it’s in his blood! My family pretty much stakes claim to a whole stretch of road along the parade route; they line their trucks on the curb the day before; they have their grills ready to barbeque; everyone brings food and drink; most everyone is wearing some kind of sparkly attire; music playlists are prepared in advance to play on big speakers; everyone arrives hours earlier than the parade is set to begin. My family knows how to create a party anywhere, my aunts being the ring leaders, it seems. And it’s immediately apparent to anyone watching us cut up and dance and howl with laughter that the Turkin family’s biggest goal in life is to celebrate it. 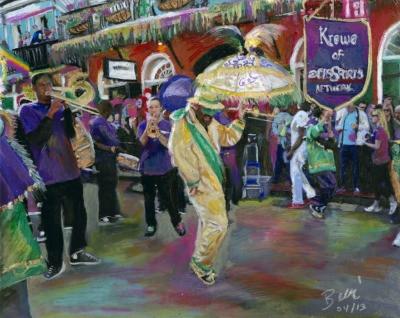 Some people might say that this is what being Creole is: “a way of life — the food, the partying, family rallying together,” as my Aunt V says (think jambalaya and Zydeco music). But it is also true that the history of what it means to be Louisiana Creole is both vast and hard to define. Long ago, people of mixed race (often referred to as Creole) were considered a higher class — we weren’t enslaved. But later, in the 60s, in an effort to impose Anglo-American binary racial classification on Creoles, my people were labeled Black if there was any single person in the family tree who had received that label on an official government document.

Despite the strong family foundation and the happiness they exuded, this widespread confusion about what it means to be Creole is ultimately the reason my family faced some dark times, too. You see, people of mixed race face racism from both Blacks and whites because we don’t fit into either category. We live in The Gray Zone.

*Come back next Wednesday to read “The Gray Zone, Part 3” which will cover interviews with family members about the racism they faced growing up in South Louisiana.

Cover photo: artist unknown. This painting was found through the Green Project.