My Son Is a Mooch

It’s about my son. I can’t seem to get him motivated to do anything. He’s nineteen years old, lives in his old room in the house, and does pretty much nothing all day. He started a few courses at the local community college his first term after high school but quit almost right away. The only thing that seems to interest him is being on his computer and video games. If I ask him to help me around the house — do the dishes, clean his room and bathroom, mow the lawn — he expects to be paid, like a teenager getting an allowance. I don’t give him an allowance anymore because I want him to go out and get a job, but he refuses to do that. I don’t pay him to do chores either, a constant battle. What I really want is for him to move out and start living a productive life, but I don’t know how to begin that process. He pretty much refuses to leave his room or do anything of value. I’m divorced and single, but even his dad can’t talk sense into him. He’ll say, “It’s just a phase; he’ll grow out of it,” but I don’t think so and the “phase” is making me crazy. What do I do?

My Son Is a Mooch 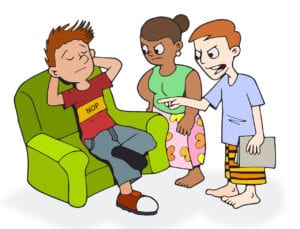 Dear My Son Is a Mooch,

You’re right, your son needs to move out. Give him one month. Put that in writing, like an eviction notice. In that month you do not buy him food, cook for him, clean his room, do his laundry, help him in any way around the house. You warn him that he must find a job and a place to live. When the time comes, he will probably have done none of those things. Too bad, he’s had ample warning. During the month leading up to this, I strongly advise you to go to parent Alanon meetings. Your son may not be on drugs, but he’s addicted to computer games/social media/electronics. At Alanon you’ll find the support and information you need. You’ll learn how to detach from your son and handle the situation with a grace and ease you wouldn’t otherwise have. On the day he’s to leave, have a friend with you for moral support. If he hasn’t packed his things, throw them in garbage bags and put them outside. And then change the locks. This may seem hardhearted, but it’s the best thing you will ever do for your son who needs to move forward in life but won’t without an intervention such as this. He’ll be fine, young birds learn to fly. However, you might give him some cash if he doesn’t have money of his own — say a hundred bucks, not much more. And don’t let him back in the house. Good luck to you. I promise if you go to Alanon meetings this won’t be as hard as you think.

REACTIONS TO MOTHER OF A TRANS CHILD 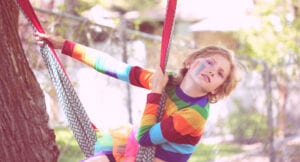 What you have done is wrong and unnatural. An adolescent is far too young to know their own mind. Much wiser to wait till the age of twenty-one to make such a devastating decision. If anything goes wrong, it will be your fault. I’m sorry to say that.

I congratulate you on your openness of heart and spirit! I am not trans, but I wish I could have had a mother who understood me as well as you do your child when I was growing up. It would have saved a lot of heartache. You’ve done a great thing and don’t let anyone tell you otherwise. All the best,