Nuking hurricanes and drawing with Sharpies: the latest and greatest from the leader of the free world.

In case you avoided Trump’s Twitter feed this past weekend (good for you!), let me fill you in on what our commander-in-chief did. He terrified a lot of Alabamians because he said that their great state was in the path of Hurricane Dorian, one of the most devastating storms in history. Up to this point, meteorologists and hurricane researches hadn’t even placed Alabama in the forecast path. And they still don’t — the storm is too far east to affect the state at all.

The National Weather Service immediately and emphatically corrected Trump, pointedly informing the country that Alabama was, in fact, NOT within the storm’s path. But instead of Trump admitting he made a mistake, he did what he typically does: lie, criticize, blame the media. Because, you know, the ability to apologize is not something one finds in a narcissist’s tool kit.

Trump once again displayed his duncedom when he took to screens across the nation on Wednesday to show us an official hurricane map. On this map, you can see how the storm is tracking. Except there was one addition: a black Sharpie drawn in so that Alabama was included in Dorian’s path. He must think we’re as stupid as he is. 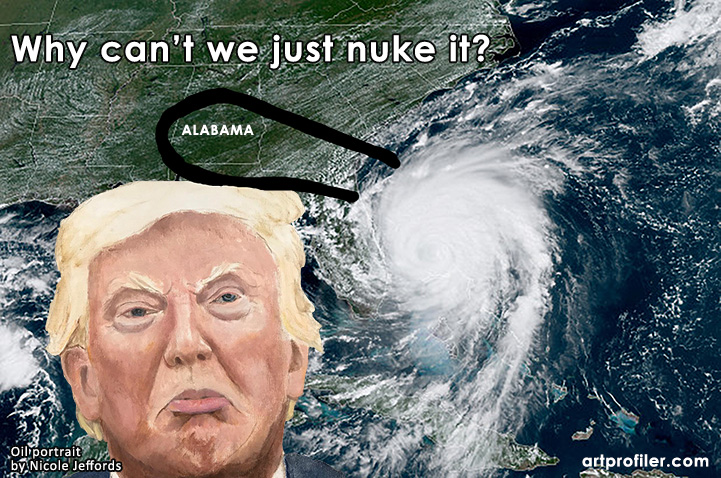 Another big hurricane snafu? Two weeks ago, it was widely reported that Trump has suggested nuking hurricanes in order to prevent their landfall in the US. Yes, you read that correctly. Nevermind the radioactive fallout that would occur causing major environmental and health issues. I guess he doesn’t think the brown people on those “shithole” islands are worth saving from radiation poisoning.

So here’s my question: if Trump can use a Sharpie to make the hurricane reach Alabama, can we use a paintbrush to make it reach him? We will certainly try.