This Is How the Obamas Will Help Me Find Nicole

We’ve all seen the portraits of Michelle and Barack Obama recently unveiled at the Smithsonian National Portrait Gallery, and many of us have come away with our own opinions about them. I love Obama’s portrait, particularly because artist Kehinde Wiley used flowers that represent Obama’s life in a personal way – chrysanthemums, the official Chicago flower; jasmine that represents Hawaii where he largely grew up; and blue lilies from Kenya, where his father was born. Wiley literally used scenery to represent the backdrop of Obama’s road to the presidency. 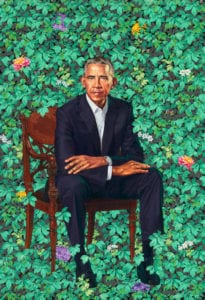 I was less excited about Mrs. Obama’s portrait by Amy Sherald. It lacks the personality and color we are so used to seeing from the former first lady, though it does capture her sense of sophistication and class. But frankly, it doesn’t even look like her. Yes, it is well painted – her dress is fabulous, but Mrs. Obama represents more than just class. Her charisma is at once both approachable and compelling, a heartwarming force of nature that fits in easily in all circles. This painting does not do her spirit justice. 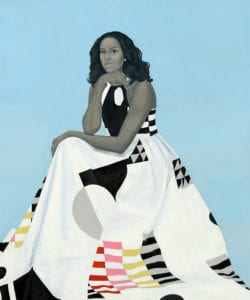 Nicole Jeffords, the Founder and CEO of ArtProfiler, has painted the Obamas as well. While Wiley and Sherald captured them separately, Nicole placed the couple on the same canvas in a way that depicts the essence of their scandal-free romance, something we are seriously lacking in today’s administration. Still, I know for a fact it’s not her favorite painting and she never chose to exhibit it. 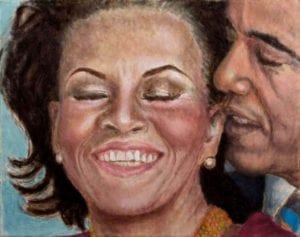 But Nicole has gone missing. NICOLE, IF YOU SEE THIS PLEASE CALL ME BACK OR RESPOND TO MY EMAILS! We are worried about you! Readers, if you have no idea what I’m talking about, watch this. 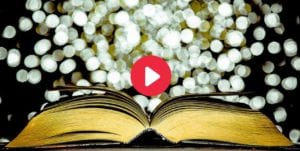 Nicole also painted a portrait of Mrs. Obama in 2009. It has never seen the light of day because it’s not a good representation. But since I have access to it in our ArtProfiler shared files, I’m putting it here for the world to see. Nicole’s going to kill me. 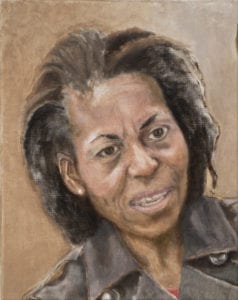 Sorry, Nicole. I know you hate this painting, but I’m hoping that you will see this and get in touch with me to give me an earful. Then I can find out what is really going on with you.