ArtProfiler’s Artist Monthly series highlights one artist per month for exceptional work in his or her chosen medium. This month, we chose portrait artist, author and ArtProfiler founder, Nicole Jeffords, as her political art pieces are timely in advance of November’s presidential election.

Editor’s note: Typically, I interview artists on video for this series and include the footage in their feature, but since Covid-19 has temporarily shuttered that aspect of Artist Monthly, I decided to interview Nicole in writing.

Nicole Jeffords is a fine arts painter specializing in portraiture. Her work combines elements that are both classical and expressionistic, dwelling on the natural beauty of the face as well as the subject’s raw emotional energy and psychological patterns that come through as the canvas develops. For her, portraiture is a revelatory process. She works almost exclusively from photographs as she prefers to be alone in the studio rather than deal with a live sitter’s energy. 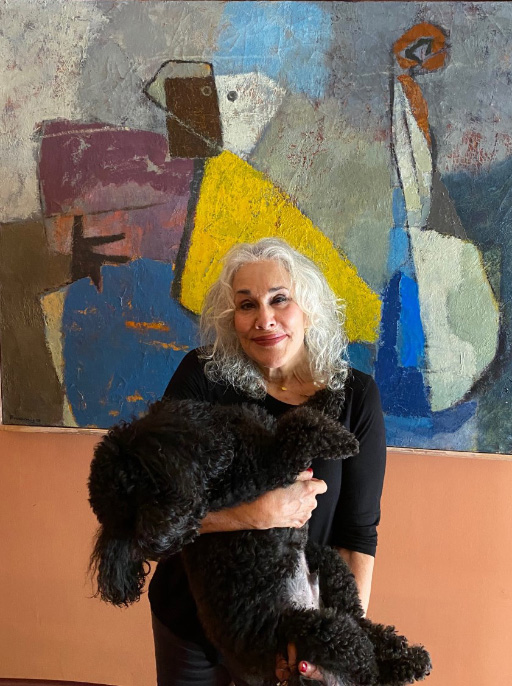 Nicole with her dog, Vinny, in front of one of her mother Franyo’s paintings

RANDI: How long have you been working as an artist in Austin?

NICOLE: I started fifteen years ago, in 2005, immediately following my mother’s death.

R: What medium do you work in?

N: I work almost exclusively in oil. It’s forgiving, though it may seem daunting at first. Acrylic is too dry and doesn’t give the effect I want. With oil you can make the most horrendous mistakes and still correct them and carry on with the painting. There’ve been times when I realized, too late, that the position of an ear or eye or mouth was slightly off and had to do emergency surgery.

N: I work from photos. (For me, I don’t like working in crowded studios, and I find models begin to “droop” after awhile, expressions fading or growing static.) So I choose photos of the subject that have the most information, the best facial definition, mood, atmosphere, etc. In the past few years I’ve had to work very quickly, so I often project the image onto canvas to get a simple and very primitive drawing — really just placement of eyes, ears, mouth — and the painting develops from that. I paint very thin in the first few stages, just trying to get tones and values in, before moving on with added layers. 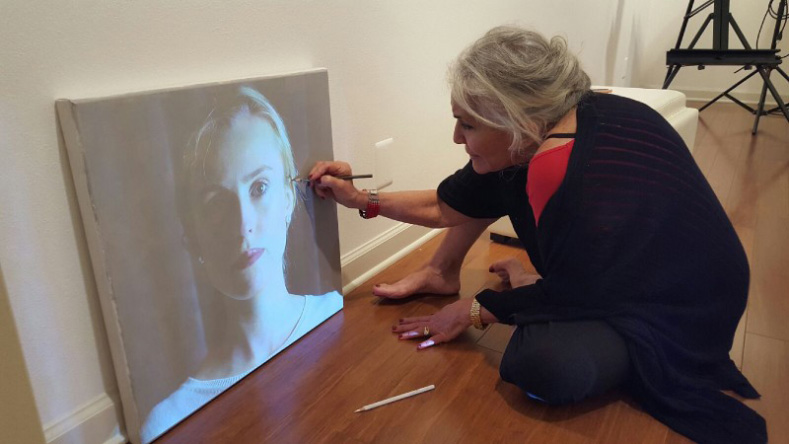 Nicole projecting a photo of a character she painted for A Secret Grave, Season 1 (originally published on ArtProfiler)

R: What drew you to painting political portraits?

N: When Trump won the election in 2016 I became so irate that I decided to paint him as a clown. That gave me a tiny bit of emotional relief. We turned the portrait into a meme (“Elect a Clown, Expect a Circus”) and the meme went viral on social media. That was the beginning. At ArtProfiler, we decided to try for some more memes and so I painted McConnell, Sessions, Kushner — the whole lot of them. Since we had to keep up with a constantly changing news cycle, I had to work very quickly — Barr was done in a day, for example. From 2017 right up until the beginning of Covid I cranked out portraits of politicians. The final one was Biden, which I did this past April. 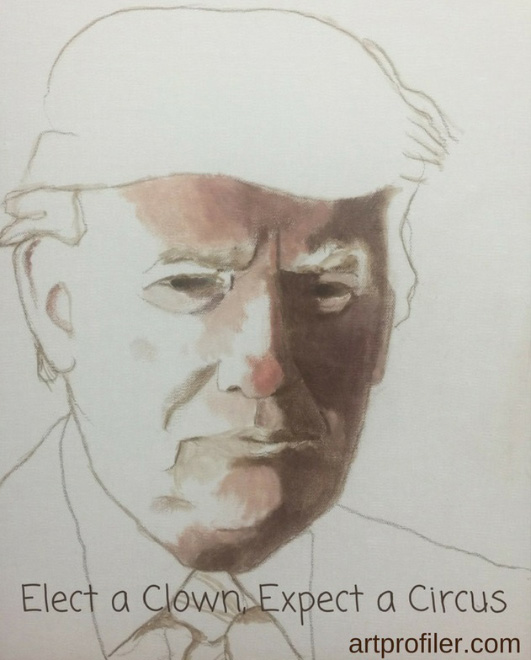 R: What inspires you as an artist?

N: Going to museums, looking at other people’s work and getting excited. But mostly faces. I’ll see a person in a restaurant or on the street or in a store and wish I could paint them. Sometimes I’ll actually stop them and ask, or secretly shoot photos of them on my iPhone. I’ve gotten some of my best work that way.

R: Did you have any formal training?

N: Yes, starting when I was very young. My mother was an excellent painter and if I wanted to spend time with her I’d have to go into her studio where she’d set me up with a still life and make me do drawings over and over again, until the lines were “alive.” I was a comp lit major in college, with a minor in art history, but I lived down the street from the School of Visual Arts in Manhattan and took as many classes there as I could every semester. When I moved to England, I studied at Sir John Cass for a year which was frustrating because in the late 60s, early 70s they were teaching what I consider crap instead of in depth painting and composition. Back in the States, I went to the Art Students League and took private classes.

R: You’re an author, too. Tell me about that.

N: In my heart, I’m a writer more than a painter. All I ever really wanted to do was write stories and novels. I went to graduate school as an MFA writing student, working with Stanley Elkin and Rosellen Brown. I wrote my first novel when I was nine years old; I was driven, though life frequently got in the way. Many years later, I wrote a novel about alcoholism that was published by Crown and became a bestseller. Currently I’ve been working on a series of novellas based on a serialized story called A Secret Grave, originally published on Artprofiler. But even more currently, I started a series of political drawings and will write — probably with some hyperbole and definitely some wickedness — about each one of them. 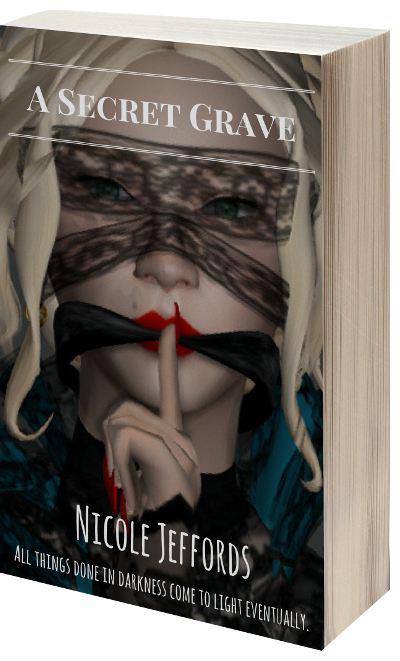 Book cover for A Secret Grave; both seasons available on Amazon 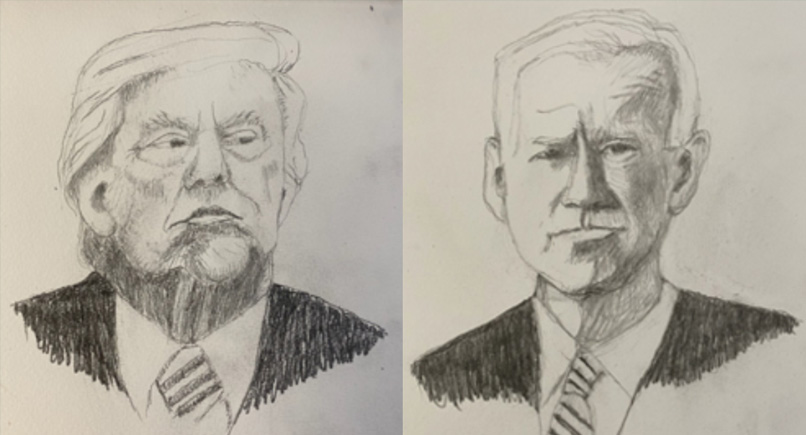 Two of Nicole’s recent drawings, published the day after the first presidential debate, 2020.

R: Any future plans or exhibits?

N: I have three portraits currently on display at Art Hop in Georgetown, TX, a show I love because it’s well displayed and there’s lots of talent. In February I was asked to paint a Time Magazine cover of Lilly Ledbetter, prominent for the Equal Pay Act passed under Obama. I was given a week to produce the portrait, which I have to tell you was a total thrill. Right after that, Covid set in and I’ve been home ever since (luckily my studio is behind my house). 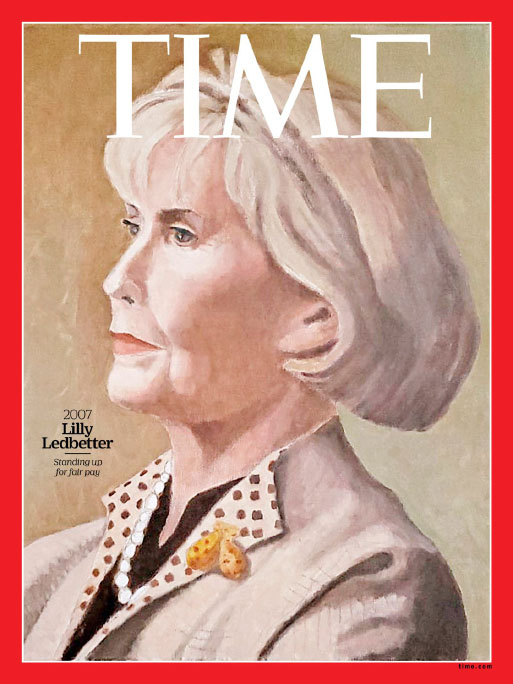 R: Where else can we see your work?

N: I never wanted to be in the gallery system, preferring to represent my work myself. My portraits have found homes all over the country plus England and Australia. One can see many of them on ArtProfiler as well as in various catalogues.

Portraits currently on exhibit at Art Hop | from left to right: Aralyn, Queen of Weird; The Notorious RBG, Wise-Eyed Clara

To see more of Nicole’s work, visit her portfolio on this site or follow ArtProfiler on Instagram.