I have three children, two boys, aged fifteen and twelve, and an eight-year-old girl. It’s the girl I’m concerned about. My wife is far more involved with her than she ever was the boys. And the reason? In my opinion she wanted a little doll she could control and play with. When Ariel was five, my wife started putting her in beauty pageants. In the beginning, it was simple stuff, Ariel in a cute dress and lip gloss. But now, three years later, beauty pageants have become the most important thing in my wife and daughter’s existence. The expense is shocking: last year we spent over twenty thousand dollars on ball gowns, hair extensions and wigs, fake teeth, drama and elocution coaches, dance lessons, singing lessons, manicures, makeup, travel, hotels — the list goes on and on. I keep talking to my wife, asking her to please cut back on expenses and not set up such a rigorous schedule of pageants (sometimes as many as two a month!) but she refuses to listen. “Oh no, it would break Ariel’s heart if we scale back,” she’ll say, but I don’t believe her — it’s her own heart that would break because she lives through Ariel vicariously. I’m not even sure the pageants are good for my daughter. Yes, they build confidence, but they also cause body image problems, such as anorexia, and devastating depression and despair in contestants who don’t feel they look good enough or don’t win often (if ever). And there’s an issue with values: Ariel thinks her physical appearance is more important than anything else in her life. For her, it’s all about gearing up for a competition rather than, say, sitting quietly and reading or playing with a friend. I feel like we’re done with these pageants — too costly and ultimately not nourishing for the soul — but I don’t know how to get my wife to stop. Do you have any advice? 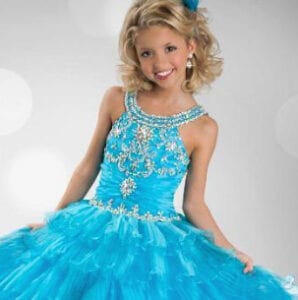 Sounds like your wife has become a typical stage mother, in my humble opinion, a mental condition in and of itself, one that involves obsession, jealousy, poisonous ambition, selfishness, an inability to reason or think clearly. Your wife will not see herself that way. She’ll point out how selfless she is, giving up her whole life, and, to some extent, her freedom for her daughter. But if she were to be totally honest, she’d have to admit that having her daughter up there on the stage for a beauty pageant has more to do with her own glory than your little girl’s rising star. If your daughter wins, it’s about her, your wife, and the time and energy she put into the competition every bit as much as your daughter’s performance. I don’t know where your daughter is in all of this. Perhaps she loves the drama and discipline of participating in pageants. Perhaps having to perform in front of a crowd is the biggest thrill of her life. Perhaps it has taught her to overcome all sorts of fears and made her a more confident and secure person. Or perhaps, on the other hand, she hates having to practice her routine, is sick of the hard work and repetition, and wishes she could be a regular girl with plenty of time to be with friends and do whatever she wants. These are questions you must quietly ask her.  As for your wife, I suggest you play the money card and put her on a budget for competitions. Only X amount per year. Twenty thousand dollars could pay for a nice family vacation, renovations to your house, a down payment for college, etc. I’m sure you get my drift. Trying to reason with your wife will get you nowhere except constant angry arguments. BTW, what are your wife’s friends saying about this? If they aren’t themselves pageant mothers, you might want to enlist their support and get them to tell your wife what they think — that while beauty pageants have many positive benefits, they can also be destructive, shallow events that lead participants to be self-consumed, eating disordered narcissists.

I wish you luck,

I went through that with my husband and it was a bummer. But after I finally had my last period and things settled down, the situation got a lot better and I began to enjoy enjoy an active sex life again. I did get a hormone cream from my doctor that helped, so I’d do that if I were you.

My wife had a terrible time with menopause, actually got kind of mean. She wouldn’t sleep with me for months. I didn’t know what to do. People said to wait it out, but I got to the point where I wanted to leave her. Whenever I got close, she pushed me away. In the end her doc put her on meds — hormones and an antidepressant — and things improved fairly quickly. I recommend patience. Sincerely,