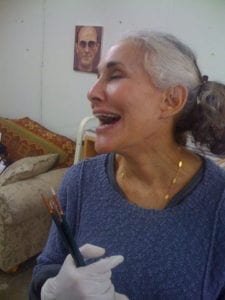 Well, I admit to being one of those unevolved women who never discusses her age. I may give the number of the decade — say 50 instead of 56 — but never the actual number. I inherited this habit from my mother, who’d rather clean her kitchen with a toothbrush than tell the truth about her age. I also inherited her loose ligaments and her problem with arthritis, an age give-away that I can’t so easily lie about. 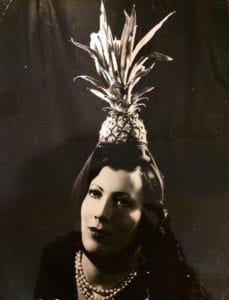 I inherited good gifts from my mother as well, such as the ability to capture a likeness of someone’s face and paint portraits, but it’s the arthritis I want to talk about. When I was a little girl I learned that I could swing my arms over my head without letting go of my hands, and I thought that was a great trick, worthy of repeating over and over again. It was freaky (you could actually see the head of the humerus swivel in the joint) like I was some kind of contortionist, and perhaps because I shone in this one area and it seemed like a special talent, I’d show off my little parlor trick whenever possible. Well, fast forward half a century, and the shoulders began to hurt like hell and, no big surprise, I had bone-on-bone arthritis. What to do? For a painter this condition was most inconvenient. 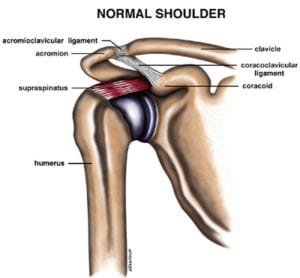 My mother’s arthritis crippled her hands, ending her career as a painter. I hoped perhaps in my case the hands would be spared and I’d figure out something to fix the shoulders. BTW, if you have arthritic shoulders (or arthritic anything) it’s hard to do yoga, so scratch that route to everlasting youth and wellness. I doubled up on Pilates sessions, downed tons of turmeric and fish oil, tried numerous different chiropractors and massage therapists, pretending to myself these provided mild relief, “mild” being the keyword. I will give you a list of all the supplements I tried, but really bone-on-bone is a mean motherfucker that requires serious stealth and strategy. But more on that next time.