A Husband with Nasty Bathroom Habits

This problem is difficult and embarrassing. I don’t even know what words to use, but I’ll try. It’s about my husband who always dribbles on the floor when he pees. I have asked him on pretty much a daily basis to please use better bathroom habits, but he might as well be deaf. He’ll say “Oh yes, sorry,” but then immediately go and do it again. We share a bathroom and if I get up in the middle of the night, I step into a little lake left by him. That’s right, the bum misses the toilet by a few inches and then shakes his weenie so the drops of piss fly all over the place, truly disgusting. Our bathroom always smells bad, no matter how much I clean it. I don’t understand why it’s so difficult to combat the problem by sitting down or wiping carefully. We have two boys and I think he’s setting an extremely bad example. I also think sometimes he just doesn’t like me very much and is using his nasty bathroom habits to get at me. Perhaps you would call this passive aggressive behavior, but to me it seems like a cry for war. Please help. 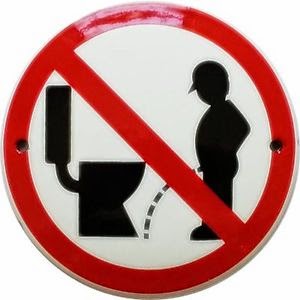 Readers: Though the above question regarding male hygiene and bathroom etiquette may seem relatively unimportant to many of you, I’ve chosen to answer it because I get asked about this unfortunate aspect of the male of our species SO OFTEN. Here are my thoughts:

It does sound as if there’s some passive aggressive behavior going on, unless your husband not only has poor bathroom habits, but very poor powers of concentration as well.  My question to you would be: how often are you on him about it, and do you use a nagging tone of voice? He is certainly guilty of thoughtlessness for leaving a lake on the floor for you to step in every night. But nagging could lead him to ratchet up his bad behavior just to get at you. Think of dogs needing to mark territory. Some human males are like that, and don’t forget that for guys the penis is a major source of pride and accomplishment. Perhaps, busy with kids and every other aspect of running a busy household, you don’t focus enough on your husband and this is his way of forcing you to pay attention to him. As we have seen in recent times, the bathroom is a battleground for serious matters, such as do we go by dress and appearance, or by the actual genitalia hidden beneath our clothes when it comes to using public restrooms. I’m all for freedom of choice and would rather have that decision be up to me than local government. In public bathrooms, it is courtesy for people not to pee on the floor or leave toilets unflushed. If they tinkle on the seat, then they should have the good sense to wipe off all the evidence. Sounds like your husband had very poor toilet training since one should be even more careful to keep things clean at home. My suggestion is this: fight fire with fire. If your husband does not respond to kind and clear verbal instruction, then piss into a cup and empty the contents in a place in the house where he’ll be sure to step in it. That should do the trick. Let me know how it goes.

All the best to you,

Here’s another one from Honed-to-Kill:

Don’t think you’re going to butter me up, Knowles, by asking stupid questions. It’s your M.O. to remain anonymous in your columns. What if I told you I know who you are, and while you try to sound male you’re actually a woman? Ha ha, that makes you shiver in your panties, doesn’t it. As for my little compulsion you pretend not to understand, think of the time you were a kid and played doctor and nurse with your friends. Remember how you felt when the neighbor boy let you take his temperature anally with a plastic thermometer? Shame and glory, Knowles, that’s the key that opens the door to acts of ritual murder.

He was trying to be disingenuous, so I didn’t bother to answer. Perhaps I will next time. 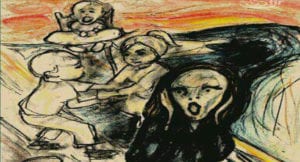 REACTIONS TO ON THE VERGE OF A BREAKDOWN

Your mistake was to marry the guy in the first place. As a woman, you’re automatically considered second class to a Muslim male. Do you have to follow Sharia? Can’t really blame him for his behavior: he is just exercising his rights as he knows them. Probably in your husband’s mind he owns you and can totally boss you around and do what he wants. The fact that you’re the breadwinner makes matters worse. He must resent you. I’d take the kids and get out of there as fast as you can, if I were you.

I’m married to a practicing Muslim from Egypt and I have to say I love every minute. He treats me like a queen. He’s kind, handsome, hard working (he owns a limousine service), manly. He is very good to me and my children. Of course there is no alcohol in the house and we eat Halal, which I consider extremely healthy. I don’t mind covering my hair in public or in front of my husband’s male friends, in fact, there are pluses to that, like on bad hair days or when you just don’t want anyone to bother you. It’s hard to explain this, but in a hijab I feel feminine and desirable. It saddens me that your husband doesn’t help you out more. Most of the Muslim men I know are very respectful of their wives — you must’ve just picked a bad apple. I wish you the best.

I’m a proponent of strict immigration laws. We have too much trouble in this country to allow foreigners in, especially if they come from countries where Islamic rule is enforced. I agree with President Trump wanting to build a wall and keep out anyone who is a threat to our land or our culture. Kudos to #45.

Previous Article
On the Verge of a Breakdown in Chicago
Next Article
Divided by Religion in Beacon, NY
Copyright © 2018 Artprofiler
X